Johnny's in the basement, mixing up the medicine, I'm on the pavement, thinking about entertainment. Via.

The more attention I attempt to pay to the front page music makers, the less I seem to “get” the game. Like Kreayshawn whining about her 15 minutes of interest in a feature piece for Complex or the mindless, omnipresent and forgetable Calvin Harris/Rihanna clubbed-out collaboration, and the inescapable obituary frenzy over R.E.M.'s disbanding after sticking it out for some, uh, 31 years. Some things were meant to remain memes, other things unneccesary, and thank god Stipe and company finally got the memo to call it a day so that the cash-out reunions, remasters, re-releases and endless rehashings can begin. But before we start talking about favorite Murmur moments, here is this week's roundup in no particular order.

Young Magic dropped an official leak of their latest sonic achievement “Night in the Ocean.” This brilliant piece of seaward dreampop is off of a 7-inch that is set to be released Ocotober 11 on Carpark with the B-side “Slip Time.” Last year we promoted their first 7-inch single “You With Air” and we are now told that a full length album is expected to drop in early 2012. Look for the Magic at their upcoming Carpark & Paw Tracks CMJ Showcase this October 18 at NY Public Assembly.

Houston's Hollywood Floss dropped the One Fan at a Time mixtape this week on DJBooth that is worthy of attention to enrich your weekend. Beats and production are handled swiftly by both BrandUN DeSHAY and T.I.M.E., and Sweet Valley High and look out for the mic talents of Brian Angel of Day 26, Jackie Chain, Laws, Nawledge of Kidz In The Hall, Solution and YP.

While Dye it Blonde careens toward the danger of almost being overplayed, a super tried out remix of Smith Westerns' “End of the Nights” courtesy of Peaking Lights to keep the interest alive. From moping in your parka to dancing subtle two steps in the club, this remix has what you have been looking for all week.

Baje One of Junk Science dropped this hilarious survey of hip-hop culture, with post-racial observations that he can only begin to describe like this:

“This is a song that I made a while back, in like 2009. Snafu made the beat, which is superdope in my opinion. We considered using the song on a Junk Science project (“A Miraculous Kind Of Machine”) but Snaf wasn’t feeling the song as much as I was so we decided to scrap it. Democracy. Since then it’s been sitting around in my iTunes. I’ve been kinda nervous about releasing it… on some ‘Oh Lord, please don’t let me be misunderstood’ shit. Today I woke up and was just like ‘Fuck it.’ I think it’s funny. Feel free to tell me what you think.”

While Girls have been celebrating the release of Father, Son and Holy Ghost, they made a twiterpated looking video for “Honey Bunny.” It starts off with Chris being very un-dude in a black midriff-showing thing, hanging around real life gf and Dominant Legs bombshell Hannah Hunt. Her love for Chris exceeds any enamorment for his “bony body,” or his recently chopped and bobbed “dirty hair,” nor is it the stuff that he says or the stuff he might be on but maybe it's that slick Vette, hmmm?

Yuck continues their Incase Room 205 series with their 90s tribute “Milkshake.” Get ready for big power chords, that slacker rock with the hair in the eyes and vintage 120 Minutes appeal for days.

We have all been salivating over the Treasure Island Music Festival 2011 lineup while ringing fists over seeing Weekend placed as Sunday's opener. Then again, Outside Lands this year had their own local SF heroes Fresh and Onlys and Ty Segall banished to the dive-y Panhandle Stage in the early noon while the likes of Toro y Moi got the big, bad Twin Peaks stage. But hey, with the TIMF lineup for this year my complaints are minimal as it goes as follows:

I might be the only one that hears this but that Wavves/Coast track “Nodding Off” from Life Sux might be the best unconscious John Linnell-esque vocal, TMBG tribute since Weird Al's “Everything You Know is Wrong.” Then again, maybe it is just me and the sleep deprivation talking.

But that's not all; all the no-fun thrills with “Bug” play like a night bro-ing out with battleship turns into a Tarantino-style Mexican standoff. Nice one dudes.

Veronica Falls provided a stream for their Slumberland self-titled LP this week. Despite cancelling their show at the Brick and Mortar in SF this week, we only long for the strange beauty of their “Love in a Graveyard” magic.

And if one stream won't do for your greedy heart, here is one of Big Troubles's upcoming album Romantic Comedy, out September 27 on Slumberland. We have been known to be big fans of the Troubles and are pleased to hear the album out do buzz and superlatives to tear the indie nostalgic veil with sophisto-pop slick keyboards and all the emotional vocals of want and desire you could ask for.

If you still remain insatiable for the stream, be the first to hear a preview of Youth Lagoon's upcoming debut The Year of Hibernation from Fat Possum. Imagine your own personal notebook doodles and intimate cursive drawn quips set to sweeping balladry. Look for the album this September 27, sneak a listen here.

Childish Gambino dropped in his weirdest and maybe his sickest track to date this week, “Bonfire.” Hard to know what exactly to make of the actor turned buzz rapper. With some vague Odd Future references crossed with Sega allusions like, “Hanging in the alleys looking for Earl like Toe Jam” Gambino supplants the OF's daddy issues with a reactionary nihilism toward the hip-hop game that seems to be more overcompensating than shocking. He tries hard to rile you up but the real attention might be the vocal samples alternately punctuated with guitar sustains. Stay for the samples, do what you will with the wacky and abrasive flows.

Is this real? For those that swear upon the ghost of the long lost and deleted follow up to Illmatic, this might be the one. DJ Rhude compiled a cycle of unreleased Nas tracks for The Found Tapes mixtape. Hop the Queensbridge to that special place after downloading here.

Putting the extra in extravagance over some rhyme liberties over Drake's “I'm On One” is Kirko Bangz with the video “Say Hello.” After a wild night of crusing with a red Houston Rockets cap in a green apple whip, Kirko indulges his inner Lester Bangz sprite + promethazine/codeine vice of sippin' the sizzurp, equiped with slow down a/v effects. Look for “Say Hello” on Bangz's mixtape Progression 2 this fall. 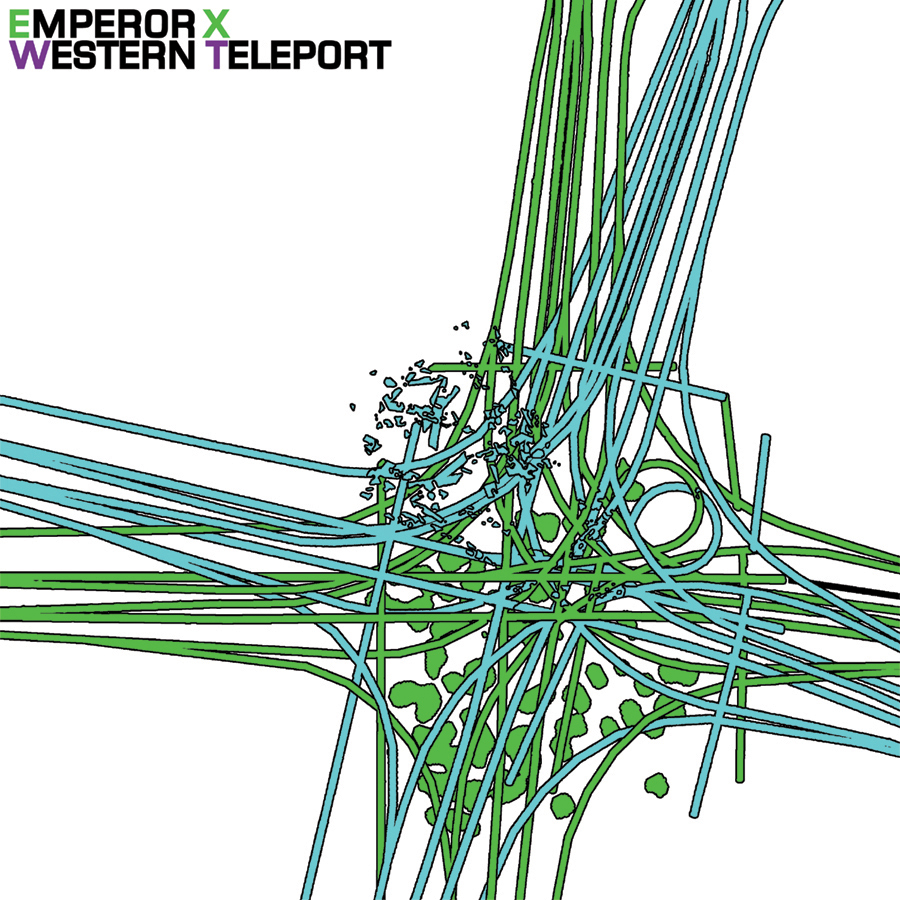 Emperor X is Chad Matheny making pop songs that pertain to transit, what people do in transit, abstaining from thoughts about others in transit. The cover of his October 4 slated Bar/None release Western Teleport depicts a complicated and hectic L.A. freeway abstraction furthering his own science teacher case for the necessities of teleports. The music is a delightful slice of thoughtful indie pop that will leave you with thoughts about the pros and cons of, yup, modern public transportation.

And to commemorate the overhyped “carmageddon” of the 405 Santa Monica Freeway's closure is the video for X's “Sig Alert” that depicts a joyous rebirth occurring around the towering viaducts.

My Brightest Diamond made a video for her new single “Be Brave” with grandiose orchestrals, but we at the Goldmine Sacks office are playing the Prefuse 73 remix on SoundCloud repeat. MBD release All Things Will Unwind October 18th in the US and October 10 in the EU via Asthmatic Kitty Records.

Another single that caught my attention was Anthem Facility's “Left to Defend.” It's a story of Dell computer commercials to buzz band tale that creates the underpinnings of sounds and sentiments that corporations turn into commodities and estranged friends introduce you to as you feign surprise and/or delight. Their EP Trace drops later this fall, preview it here.

Also we saw Saukrates release the video for his single “Drop it Down” featuring Redman ahead of this upcoming album Season One due in early 2012. The video styles bounce between vintage iPod commercials and video game-looking digital caricatures, while percussive metal tapping tapping sound will stay in your dome long after the auto-tuned flows have faded.

While the 90s smitten garage affinities refuse to go anywhere anytime soon; Sacramento's The Young Vintage confirmed that they will be releasing their album debut album Somethin' Blue October 2 at their Ace of Spades release show and will be available via the digital and physical mediums there after. Here is a taste with their ode to Amtrak connecting and breaking hearts, “Last Train to Humboldt.”

Last Train To Humboldt by TheYoungVintage

Louis Jones of Spectrals released the video for “Get a Grip” that showcases his pastoral hometown of Heckmondwike, UK. And fitting with the surrounding country geography, the song sounds like a testament dedicated to self-betterment amid what might as well be the town next to Stonehenge to us yanks. “Get a Grip” is from Spectrals' forthcoming album Bad Penny which drops October 25 via Slumberland Records and October 17 via Wichita in the UK.

After attempts to connect to the Blue Room Creations crew from the Monterey Peninsula, I finally heard confirmation that electro oddballs Hot Dogs in the Sun will be releasing their debut album Activate Lasers October 11 on digital, CD and rumored LP formats. Untill then, here is a mini-sampler of the treats to come, kicking off with their to ode to the elasticity of sweatpants.

Activate Lasers by Hot Dogs in the Sun

Our Miami bros the Jacuzzi Boys dropped a video for “Automatic Jail.” What you get is a dog's eye view from scratching himself loose from his leash restraint, to the perspective shift of the owner and his adventures chasing the tail from a chance meeting. A brilliant video of comparative species behavioral studies and a reminder that you need the Jacuzzi's Glazin' album in your life. Look for it now courtesy of Hardly Art.