Week in Pop coming at you in Orthodynamic Sound. Via.

As late August threatens to draw our season of laziness and idle behavior to a close, summer's end seems to have already been written on our Facebook walls. What with festival stage collapses from the Indiana State Fair to Belgium's Pukkelpop uniting disparate acts (from Sugarland to the Smith Westerns) and their unlucky fans, tragedy also struck the LA semi-vintage metal scene with the loss of Warrant frontman Jani Lane, which has perhaps incited numerous 80s hair metal groups to reform in tribute. Meanwhile, in less important bad news, Big Boi stood up our Impose team and thousands of festival goers this past weekend at Outside Lands in Golden Gate Park. With our condolences and grievances to the respective parties, let us count our blessings in the makings of what made our week worthwhile, in no particular order.

HTRK has a 12-inch single in the works for “Eat Yr Heart” that also includes a cover of Suicide’s “Sweetheart (A. K. A. Love You)”, on Ghostly International. Jonnine Standish reworks the obscure Alan Vega classic to sound both foreboding and mournful while Nigel Yang transforms the entire number like a forgotten 4AD Cocteau outtake. Heart breaking still, one cannot help but think of the track as an odd yet entrancing ode to the loss of bassist Sean Stewart, who left too soon and whose passing has inspired the surviving members' darker tone.

Listen again to the title track “Eat Yr Heart” where the group transcends the funereal into an audio abyss that is downright fearsome. The duo is also anticipating their first ever U.S. tour coming up this fall after their upcoming LP Work, (work, work) drops September 8, also on Ghostly Interational.

Dent May's latest single “Fun” was recorded at his home studio, Hits Incorporated, located at the Cats Purring Dude Ranch in Oxford, Mississippi. A 7-inch single will be pressed on clear vinyl in a limited edition batch of some 700 records and will be released September 13 on Paw Tracks. Check your listings for tour info, where a special tour only cassette might be yours, but act soon as they are limited to 100 copies.

Upon receiving Jensen Sportag's single “Gentle Man;” I was at first perplexed and then annoyed by the red flags of tongue-in-cheek pretension in the press release description, which trumpets the sheer existential, poetic mystique of their track. I hope they had a good laugh about it, too.

Gentle Man draws strength from vulnerability. He carries the weight of his unspoken love on his shoulders and itkeeps him strong, bearing the pressures of the world from within like Atlas in a cave. He dreams of a day when the weight of all love's ego will disintegrate,and the earth will float.

What Austin Wilkinson and Elvis Craig have crafted here with “Gentle Man” is Miami afterhours romance grooves that sound nothing like what you would expect from Nashville musicians.

San Francisco is excited with news of Weekend's upcoming EP Red, due September 20 on Slumberland. While last year's Sports presented the bands proficiency and excellence in their calculated art of skuzz balanced with the beautiful, Red's first taste “Hazel” presents excercises in more melodic behavior, with the guitars reigned in to more modestly frame a senes of romanticism.

OFF! finished out their punky-song cycle at Room 205 visit with “Crawl.” While the end of any Room 205 artist-in-residence is always a sad good-bye, we wonder and look to who will grace the space next.

Get ready for some more sample weirdness with Wise Blood's release of “Nosferatu” this week. Since Pittburgh's Christopher Laufman released the first Wise Blood EP + in the summer of 2k10, we have awaited an LP follow up. With help from the people at Dovecote Records, the debut WB album These Wings will be made available digitally on August 30 and September 13 on vinyl. For an indication of direction, feast your ears and any other senses on the single “Nosferatu” that presents Laufman layering samples, loops and plenty of aural dissociatives that could compel any young vampire to give up the night shift and become a buzz band loving day tripper. 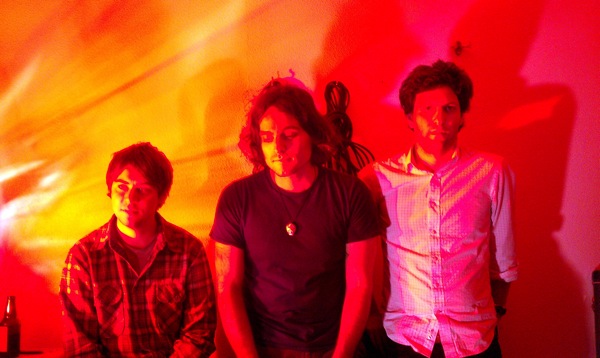 Oakland's Man/Miracle continues their good positive East Bay vibes with the new single “Meditations on Nothing.” Trimming down from the four-piece that graced last year's The Shapes of Things, the trio is moving toward full-on dance motion and soaring vocals. A cassette EP is out September 26 while talk of an LP is in the works so stay tuned.

Also, if you missed Man/Miracle's single “Don't Waste It” from earlier this year, here it is for your enjoyment.

Stalley dropped the video for “Chevys and Space Ships” off of his Lincoln Way Nights re-released on hard copy for the first time through SMC/Fontana October 25. You can thank Illusive Media along with Shomi Patwary and Robbie Elliott for the visual styles, capturing the surreal/hyper-real environments for what is amounting to be the next hip-hop fascination.

Stepkids released “Legend in My Mind” this week with their New York Fall Tour with The Horrors coming up this Septembe. We are anticipating their debut album's release this September 27 on Stones Throw Records, and despite any misgivings about the tour pairing; those 'KIds know how to make some good, indie-ish soul for a trio of anglo dudes.

MP3: Stepkids, “Legend in my Mind”

So I discovered this bedroom beat mixer called Knxledge who put up an EP on his bandcamp called Komposure that we have streaming right here. At times “uh” and “yeah” samples get monotonous, and kind of beg for an MC to set lyrical fire to these beats. It will remind you of the early days of Gescom and Autechre, where electro-bedroom-boffins began to inform that weird mid to late 90s space of trip-hop that still seems to ignite interest from media outlets hungry for the next “crossover” artist.

Kathryn Calder has a follow up to last year's Are You My Mother? coming this October 25 called Bright and Vivid brought to you by the good folks at File Under: Music. Calder's ambitious single “Who Are You?” marks a shift in style where sentimental piano musings melt to dance floor potential gold. Like Alison Goldfrapp before her, the progression from piano or pop baroque to dance/electro is a tricky game. With all the sentimentality intact, we'll be looking forward to Bright and Vivid during our upcoming Fall musical harvest.

Arrica Rose's cover of the Buggle's “Video Killed the Radio Star” does a number on the original, painting out in acoustic strums the similarities between that song and a Cyndi Lauper unplugged. Listen for her Louis Armstrong tribute at 3:15. Her third album Let Alone at Sea is in stores now.

And courtesy of Reebok Classic and Rock the Bells, here's a brief little chat with Nas about the immortalized events between him, DJ Premier and Q-Tip that created the illustrious Illmattic. Nothing short of epic.

Double down on Wagers
Impose Main
The Weeknd's Thursday