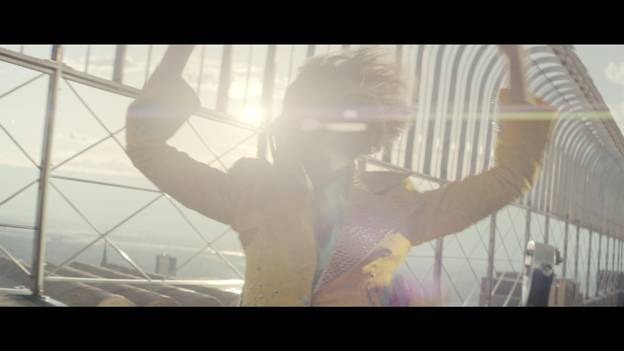 Hanging haphazardly outside of the building is a sign that reads SOUNDSY, INC. in illegibly graffitied font. An elevator shaft is pulled open to reveal a black-and-white poster of Vampire Weekend, captioned with “Gloria, in excelsis Deo” and flanked by three unlit candles. An unnamed intern, wearing black Levis, a black American Apparel deep-V, and a pair of Ray Bans, materializes. He leads art-rock trio the Yeah Yeah Yeahs down the shaft into a room not unlike the concealed cave of the Foot Clan from TMNT. The intern beatboxes and shouts “SWAG!” as they walk into a main office space, and everything smells of beer and money. Crouched over a laptop near a young, female intern is Don Draper Jr. Jr., Gene Draper Jr.

GENE: Karen, Nick, Brian, thanks for swinging by. Can I offer you a cronut? A cheek piercing? Perhaps a molly?

GENE: Great, well, take a seat. All I have are these sponsored Zero Gravity Chairs™ but, I am telling you, you haven’t seen relaxing until you’ve laid back in one of these with a Red Bull in one hand and an Intelligentsia coffee flown in on a private jet from Guatemala in the other. It’s just like the Romans or 2 Chainz would have wanted it.

Gene moves to lay back in his chair; Karen, Brian, and Nick all uncomfortably flop down onto beanbags. The air is stale like a dank bar. Sounds of construction come in from outside.

GENE: Oh, that? They’re just building a Tower of Virgins Megastore down the street.

NICK: I beg your pardon?

GENE: Oh, you haven’t heard? CDs are, like, back in. For real this time. And the minute Richard Branson found out, he dropped—I dunno—like four bill on a spot right off Bedford. They have a mascot, too. You know the dementors from Harry Potter?

GENE: K-sauce, come on! I practically designed this company on the ethos of Gandalf, my babe!

NICK: Isn’t that Lord of the Rings?

GENE: Yeah, sure. Whichever made more money. Can’t wait for Tower of Virgins to open though—you have to walk through the spirit of a dementor in order to even get through the front door. It’s like this new technology. I blogged about it for HuffPo.

GENE: But anyway. Enough about other corporate synergy models—let’s talk about ours.

From out of nowhere, Gene pulls a stack of locally sourced, hand-recycled papers, printed with organic Somali ink. On each sheet, there are curated lists by staff writers at BuzzFeed enumerating why the Yeah Yeah Yeahs would benefit from Soundsy, Inc. and its conglomerates to co-produce their newest music video. The stacks are organized in categories of LOL, WIN, OMG, CUTE, TRASHY, FAIL, and WTF.

GENE: I think it’s best if we start with WIN. Flip to page 321 of your proposal handbook, and if you don’t mind, our staff photographer is going to Vine your feelings about each idea, and then upload several reaction GIFs to our Starbucks-sponsored reaction GIF site, LIKE I GIF A FUCK.

KAREN: Uh, Gene, was it necessary to print these out? Couldn’t we just look at them online?

GENE: Well, Karen, if you cared about the politics of supporting Somali ink farmers, you would know that for every page we print out with organic Somali ink, we give one page of BuzzFeed lists back to their impoverished communities. Maybe read Upworthy once and a while.

GENE: Like I was saying. I didn’t start this company with the significant leftover inheritance wealth of my grandfather to have the content I produce to be shitty or unsynergized. If I’ve learned anything from growing up in the shadow of The Social Network movie, it’s that one million dollars isn’t cool.

BRIAN: Then what is?

GENE: (indignant) Uh, a billion dollars, guy. Maybe that movie was a little after your time. (Guffaws)

GENE: All right, mom. Listen, if you don’t want us to make the WIN video, then we can try something with a little more LOL or CUTE or WTF. All I'll tell you is that this is about advertising, and if your priorities aren’t in the right place, then I suggest you try somewhere else.

NICK: Did you just say that this was about advertising?

Gene tips his Zero Gravity Chair™ forward and stares intently at the three, who are still slouched in beanbags.

GENE: Let me tell you a little story.

GENE: My grandfather was a great man. He was handsome, accomplished, and magnificently rich. He wore a suit to work every day and he married his 25-year-old secretary. I don’t remember him ever being sober. And my grandmother? She looked like hot Ke$ha. That man understood advertising and corporate synergy and most of all, how to make a hot buck. Do you want to know what makes me different from my grandfather?

The trio looks down, uncomfortably.

GENE: Nothing else has changed. Now either you’re in for this strategy or I’m going to be letting down our unpaid interns who I promised access to the Soundsy private stream of the new Weeknd album if this deal went through. Do you really want to let down a bunch of poor NYU students who can barely afford a monthly unlimited Metrocard? Do you really want to send them to happy hour today with only the cash for a shot and a beer, but no residual coke-binging feeling from the exclusive Spotify stream on their iPhones?

NICK: I do feel kind of bad. That Weeknd record is supposed to make you feel you did drugs without ever having been near them.

BRIAN: And it won’t hurt us that much.

GENE: Right, then it’s a deal. Sign here, and I’ll notify Loki to prepare the Empire State Building for its closeup.

GENE: He’s my boss, dude. Dark lord of the underground? Deity of the Norse pantheon? Guardian of all things sorrowful? Don’t you read FastCompany? Damn.

The stage lights shut off and a residual “SWAG!” echoes in the background, the rogue unnamed intern celebrating his newly minted access to exclusive content.