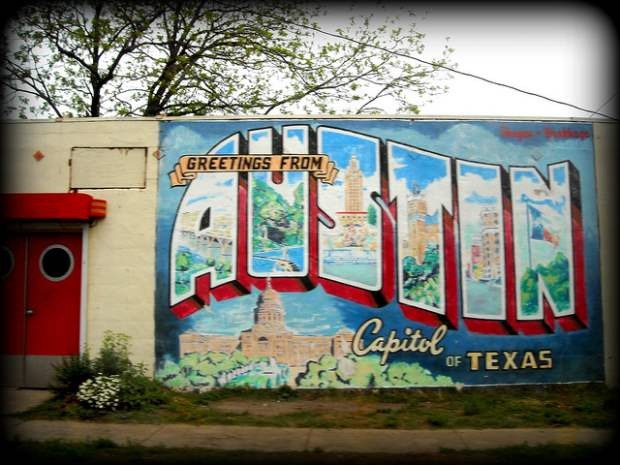 In an effort to properly capture the negativity we see in the world, Impose will be starting a new series entitled, “Worst New Music Complaint”. The series* will keep our readership informed of all the musician, music journo, publicist, manager, A&R, etc complaints; the bothers putting the fuckmylife into their career of bringing people happiness through music. The issues we identify but never correct. First up, SXSW.

Yeah, yeah, yeah, SXSW is an over run corporate branding machine that is “nothing like it used to be,” right? We've been hearing it for years, and it assuredly is true (we got the Facebook invite to your “Anti-SXSW Let's Stay In Brooklyn” event). Even in their wildest, most capitalistic dreams, the founders of SXSW could not have predicted the spectacle it's become.

But why should that upset us? We deal with corporate shenanigans every waking moment of every day. (You hear about the Super Wal-Mart they're building next to the Wal-Mart? They're going to tear down the less super Wal-Mart and make it a parking lot.)

It upsets us because Austin is supposed to be the “liberal capital” of Texas. An area of enlightenment that should rise above such succubus activity, but instead seizes the opportunity to pay bills months in advance off the price gouging of SXSW-goers. And it's not just reserved for Austin. Our own Brooklyn backyard is the poster-child for the consumerism the cultural elite bring with them. How can the independent leftists of the world complain about the right when given the opportunity to put our brightest, most-educated and cultured foot forward, all we do is turn it into a money-grubbing extravaganza?

Sure, we can turn a blind eye to the corporations moving into our backyards, but when it's at our own doing, it makes us feel that much shittier about ourselves. And no amount of free alcohol can ease the sting of Zachary Cole Smith calling us drunk corporate vampires on cocaine. We go on complaining at the Spotify House to the publicist for Beach Fossils and claim next year we're going to Treefort Festival, we hear it's chill there, knowing damn well at the rate the world moves we'll poison the wells of Boise faster than we brought down Austin.

My Chemical Romance, Our Demise Shall End Sarah Sands (Cult of Emo)

Lil Wayne, I Am Not A Human Being Unless You're Accusing Me of Having an Sizzrup Addiction, In Which Case I Am A Human Being With Epilepsy (Young Money Cash Money Billionaires)

Vampire Weekend, Torching Your Beloved Saab And Laughing Behind Your Stupid Back (XL Recordings)

Gucci Mane, Call Me Guwop, No Call Me Gucci. Get Out of My VIP Booth, Fort Hood Soldier. GUCCI! (Trap-A-Thon)

CBGBs, Spitting and Pissing on Ya Grave Like Bieber (CBGB Records)

Lollapalooza, Reissue Sales Are Down, Better Figure Out A New Way to Pay Old Dudes To Jam (Chicago)

Foxygen, Passion Pit Told Us This Is How You Act Famous After Pitchfork Validates You (Wait for the Co-Headlining Passion Pit/Foxygen Fall Tour Announcement)

Morrissey, Get Out Of Our Lives With Your Fatigue And Protein Deficiency (Retire Records)

*We would never actually do this.

PrevPreviousPaw Paw, “Slight Chant”
NextWhat are you bringing to the orgy?Next