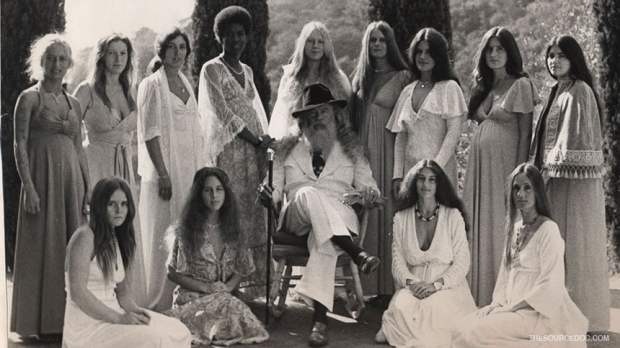 For those interested in 20th-century LA history, a mention of the swingin’ 1960s scene of the (now fairly worthless) Sunset Strip will include a token number of things like wild parties, streets flooded by beatnik/hippie displacement, The Whisky a Go Go and some band called The Doors. But depending on who you’re talking to, the mention might come of a certain longhair named Father Yod, his trove of young beautiful women, his psychedelic rock band YoHoWah 13 (it included Sky Saxon of seminal proto punks The Seeds) and their very popular health food restaurant, which opened as one of the country’s first in 1969, serving the likes of John Lennon and Marlon Brando.

With 13 wives, Father Yod’s utopian experiment in communal living at a mansion in the Hollywood Hills survived controversy, confused onlookers and interested local authorities until in 1974, the family sold the restaurant and fled to Hawaii. It was here, in Oahu, that Yod died while – pardon me, but this is kind of epic – hang-gliding over a beach after leaping off a 1300-foot cliff. Now, thanks to Drag City Films, the entire Source Family story is set to be told on screen.

Comprised of personal accounts, “never-before-seen home movies” photos and music created by the members themselves, Drag City will release The Source Family in May. The film is inspired by the 2007 book The Source: The Story of Father Yod, Ya Ho Wa 13 and The Source Family, written by one of the original 13 wives, Isis Aquarian.

The film will premiere May 1 at IFC Center in New York, which follows initial screenings at SXSW and The Seattle Film Festival. To coincide with the film, Drag City will also issue the soundtrack and Billboard reports organizers are also planning “special events in several cities that will include screenings, live music, pop-up restaurants, foot massage and other activities.” Groovy.

Watch the official trailer for The Source Family below.