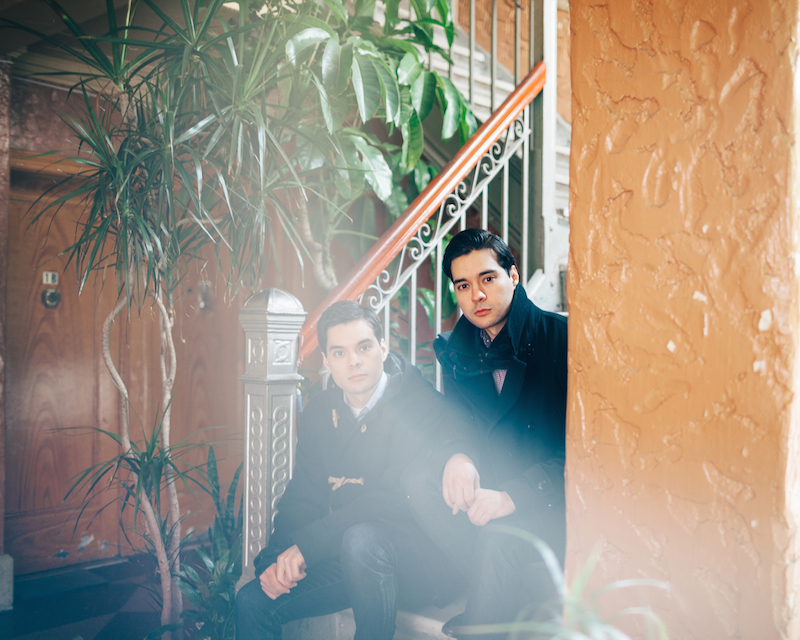 We initially had the pleasure of featuring Brooklyn-based artists Max and Nicky Weinbach, AKA Little Person, when we premiered their track “Perfect Girls.” Now, the duo are back with a new single ready-made to accompany thoughts of friends and family you might be missing this holiday season.

The tender ballad “I’m Happy to Be With You” is out now and to celebrate we had Little Person share with us some tunes they’ve been listening to of late. Listen and read below and, should they be near you, check out the band’s variety show Max and Nicky’s Vintage Basement (dates here).

“This song is quintessential Bart from his amazing album Maroon Cocoon. It’s one of our favorite records of all time, and this song, which features vocal harmonies from Greg Moore of The Moore Brothers, counts among our biggest influences. Bart is simply the best, and we highly recommend anything off his other albums including his latest LP release, Blue Motel.”

“Watch Me” by Foxtails Brigade

“Probably our favorite track from Foxtails Brigade’s latest eponymous LP. It’s both melodically and lyrically powerful, and lead singer Laura Weinbach’s vocals really shine, here; one of her best studio performances to date. The production on this song is also totally rad and beautiful and was a big inspiration for us on our latest single, “I’m Happy to Be With You”. Definitely recommend seeing this band live even if it’s just to see Laura perform “Watch Me” solo; it’s an entrancing experience.”

“This song has it all: it’s catchy, it’s progressive, it’s retro, it’s hip, and the production is off the Richter scale. We first heard about TEEN a few years ago, before we had moved to New York. We were actually visiting New York at the time and decided to check out what the local music scene was offering. We looked up who was playing at Baby’s All Right and happened to stumble upon a date that TEEN was headlining. Our introduction to the band was this song, and, when we saw them play it live later that night, we knew this was a group to keep our eyes and ears on. Melodically, it’s like a happier St. Vincent track, and we love that. Go check it out!”

“Heart and My Car” by Summer Salt

“Instagram and Facebook ads really work! That’s how we found out about this band. Nicky was scrolling through Instagram when he heard part of this track play. He had to scroll back to see who it was. In a way, it sounded a lot like Little Person, so he was immediately hooked. Instagram really knew how to target the right audience. Nicky looked up the full song and was amazed how melodically and tonally similar it was to our band’s output (though lyrically quite different). This is a song we were listening to on repeat for quite a while. Catchy as heck, and we love it.”

“Our older brother, Brent Weinbach, got Nicky an album of Ryuichi Sakamoto’s solo piano pieces a few Christmases ago, and, having already been huge fans of Sakamoto’s film scores (e.g. The Last Emperor, Merry Christmas Mr. Lawrence), we knew this was probably going to be good. And, it was! What a great album! ‘Tong Poo’ might be the best track on there, but there’s a lot of great ones. “Tong Poo,” originally performed by Yellow Magic Orchestra, is an upbeat piano piece with influence from Chinese classical music and what seems to be an element of grooving jazz fusion. It’s quite a ride of a piece, and you’ll be instantly hooked after even one listen.”

“This Strange Effect” by The Shacks

“We first heard this cover of an unreleased Kinks song in an iPhone commercial, and, immediately, had to find out who it was. For such a young band, the Shacks show a lot of sophistication in their production, and lead singer Shannon Wise’s breathy, dreamy vocals are perfectly innocent yet quite controlled, showing off a maturity beyond her years. We’re happy to see another band as into 60s music as we are. This is another track we definitely listened to over and over again, this past year.”

“When The Night Ends” by Gary Portnoy

“A lot of people might know Gary Portnoy’s music from the opening credits to a bunch of TV shows, including Cheers, Punky Brewster, and Mr. Belvedere. Yes, Portnoy wrote all those theme songs, and they rank among the best TV show theme songs of all time. But, did you know that Gary Portnoy released a solo album before he recorded any of those hit intro songs? A few years ago, Nicky got this album for Brent for Christmas, and ‘When The Night Ends’ was easily one of the top two best tracks on there. It’s such a good early eighties adult contemporary jam, and the lyrics are great, too. We highly recommend listening to this song, and it might just lead you down your own Gary Portnoy rabbit hole. Enjoy!”