On The Couch With Wyatt Cenac 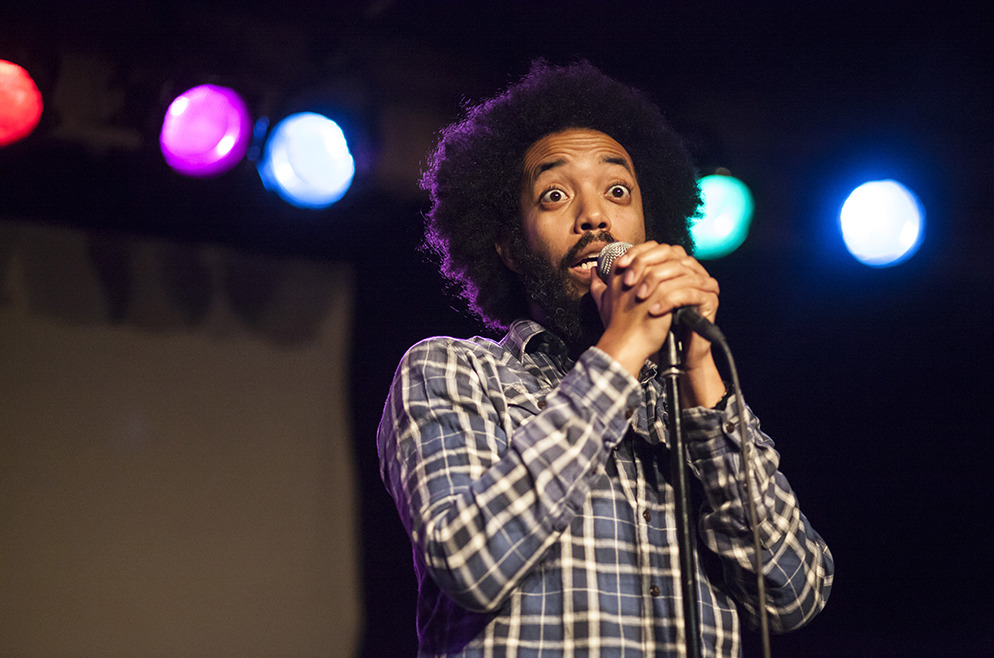 The subject speaks confidently, taking time to explain at length each response he gives to me. This is not to say that he is cocky; in fact, quite the opposite; the patient is extremely modest, careful to give credit to his friends and mentors whenever possible. It is clear that the natural mode for this subject is that of a storyteller. His speech is riddled with quotations, a sign, perhaps, that more than simply answering my questions, he wants to paint a fuller picture of his thought process and how he perceives situations. And it works, the patient demands attention when he speaks, and rightfully so. His work on Comedy Central and in his own stand-up has made him a staple of the local and national comedy scene for years. This week, Wyatt Cenac taught me a thing or two about reflecting on one’s past and presenting that past to an audience.

Has your family ever seen your work on The Daily Show, or your stand up? What do they think of it?

Yeah, some aunts and uncles came and saw me in Philly, and they were aunts and uncles that I spent a lot of time with as a kid. They surprised me and showed up, and they all said they liked it. I’m sure there’s probably an element of seeing a relative do something that they were like, “That’s cool!” But they said they liked it, and I’ve had a cousin or two show up to see me do a show, and they’ve always been positive.

Are there any jokes that are too taboo for your parents or are they more inclined to say anything goes?

To tell you the truth, I’m not close with my folks, so I have no idea if they like it; we haven’t really talked.

Do you ever try to censor yourself? Do you have limits to what you joke about, or anything fair game?

No, I definitely try to think about what I’m saying. I think that was always instilled in me—to think about what you’re saying and the impact of what you’re saying. I’ve always tried to have some element of, “Okay, I don’t necessarily want to make a joke at the expense of somebody where it seems insensitive, or it seems disrespectful.” There’s some thought that goes into it.

How was the move to Los Angeles as a comedian after college? Was it hard to get into the scene there, or was an easy transition?

Well, when I got to LA, I had done some stand-up in college, and then got a little overwhelmed and a little afraid when I got to LA, and so I started out by doing sketch and improv, and that was kind of my entry into doing comedy there. I was doing a lot of sketch and improv at places like ImprovOlympic and the Upright Citizens Brigade and found myself missing stand-up, and I missed that you have these ideas, and you have your way of seeing the world, and I didn’t necessarily feel like I could get all of that out through improv.

I give a lot of credit to a comedian named Laura Krafft because she used to do a show in LA at an improv theater that was kind of an open mic show of comedians and other performers, and she asked me to take over hosting her show because she was going on the road. So I took over, and in hosting the show, I was like, “Oh right, I miss this, and I miss getting on a stage by myself and just rambling about whatever.” That kind of got me back into it full time.

There’s definitely a sense of narcissism to it; I mean, you’re getting up in front of a group of people and saying, “Hey, pay attention to me, I’m the person with something important to say, and I’m the funniest one in the room.” I think as far as other comedians goes, I feel like by getting on stage, you get out some of that. There’s kind of a therapeutic element to the release of some of that narcissism. I think when you’re off stage, everybody I’m around is usually pretty cool and pretty laid back, so I think the act of getting on stage gets some of that out.

Have you ever bombed on stage? How did that make you feel?

Oh sure. I think that on some level, it sucks in the moment, but for me it’s always a thing of, if I have a bad show, all I wanna do is go do another one to wash the stink of the bad one off. That to me is what’s kind of crazy about it—yeah, you have a bad show, but there’s another show right around the corner. And you can have a great show, and then another one right around the corner, and it may not be as good as the great show, but it might be better! You’re always kind of chasing that weird high, and that’s always the thing for me. “Oh yeah, that one sucks for now, but there’s another train coming.”

Have you learned anything about yourself from doing stand up? Has it helped you grow as a person?

I think so. Especially writing stuff that’s a bit more self-reflective, it kind of causes me to look at myself in a somewhat different way, and try to look at myself—flaws and all—because that’s usually where some of the comedy comes from. So in that way I definitely feel like I probably learned stuff about myself, and it’s probably been good for me to think about a particular idea and how it relates to me.

Wyatt Cenac discusses his Netflix special on the Daily Show.

What influenced your decision to release your comedy album on vinyl, as an LP?

I have a lot of old comedy records, and I think for me, when I was coming up, listening to comedy records, you just hear so much in it; you get a sense of the world that the comedian is in. I always liked that; I always liked that you could hear the glasses clinking, and you could hear somebody coughing, and there was just a character to it all. So when I thought about putting this album out, I wanted to do something like that, that put the emphasis on the sound, and I’ve been thinking about it for a while. Then this photographer named Kyle Makrauer had taken some portraits of me for a project he was doing, and he asked me if I wanted to take anything for myself. And I had had this idea to take a photo of the back of my head, but with my shirt on backwards, so it looked like the front of my head, and we did it, and I remember I looked at it, and was like, “Oh yeah, that looks cool.” And it became this thing where it was, “That looks like a record cover… Okay, you’ve got your cover, now go make the record, dumb-dumb!”

Your new special is titled Brooklyn. Do you have a preference for comedy scenes in New York versus LA or anything like that?

Not necessarily. I think I like doing shows here in New York, partially because I live here and it’s incredibly convenient for me to do them, but I feel like this is always where I get to come back to. I host a show out here, there are a lot of shows that I’m familiar with, where I can go if I wanna work on stuff. So I definitely feel like I have the home-field advantage because there are a lot of places where I’m allowed to create and try things out.

Anything in particular about Brooklyn that you really love?

There’s a lot that I love about it. Part of it was, I named it Brooklyn because I didn’t want to name it Live In Brooklyn, I feel like other people have done that. Also, I live in Brooklyn, I do shows in Brooklyn, I was born in New York, and my grandmother lived in Brooklyn, and I spent a lot of time in Brooklyn with her, and so I have two lives in Brooklyn: I have one from my childhood, I have a lot of fond childhood memories of Brooklyn, and I also have a lot of fond memories now as an adult, and this is the place where I hope to stay for a while. With this record, I put a fair amount of time talking about my childhood in Brooklyn, as well as talking about my life as an adult here, and so that, to me, was part of why I wanted to call it Brooklyn. Like, “Oh yeah, this is how this place has shaped my views over the years.”

At a fairly young age, I remember thinking that I wanted to be funny, and I became very interested in the idea of being funny, but I never was the person that was trying to grab attention in class as a class clown or anything like that. I always thought there was a space for it, and I just wanted to be able to get on that stage where I could do it.

What motivated you to go on stage the first time?

I think it was just that I was such a fan of it, and like I said, at a young age, I kind of knew that this is what I wanted to do. I didn’t really tell a lot of people; I just worked on it in my room and just tried to study it as much as I could, and then one day it just felt like, “Oh, now might be the time to try.” I never had an opportunity, and then I saw an opportunity. When I was in North Carolina there was an open mic at a comedy club in Raleigh called Charlie Goodnights, and I remember somebody told me, “If you want to do stand up, they have an open mic.” This guy Zach Ward told me about it, and I went with him, and I checked it out, and then they told me to come back the next week. But the moment I saw it, I was like, “I want to do this.” I became kind of taken with the idea of walking through the kitchen—you had to walk through the kitchen to get to the stage—and it just seemed like this magical world, and I think at that moment it was like, “This makes sense.”

I think it’s a bit of both. I think there are things in the outside world that influence me, but then there are things in my own life, and to me, the sweet spot is that I can find a way to combine the two and talk about my own experience and it may have some relation to what’s going on in the world.

How has comedy affected your mental health?

I feel like that’s the better question for a therapist; I feel like I’m doing great! I think, to the earlier point of getting on stage and having some release, as far as whatever that narcissistic thing is, I feel like that’s the thing that’s great about it, and probably helps in immeasurable ways, just being able to get up on stage and laugh about my problems, the world’s problems, and share that with other problems. So in that way, I think, I hope, it’s good.