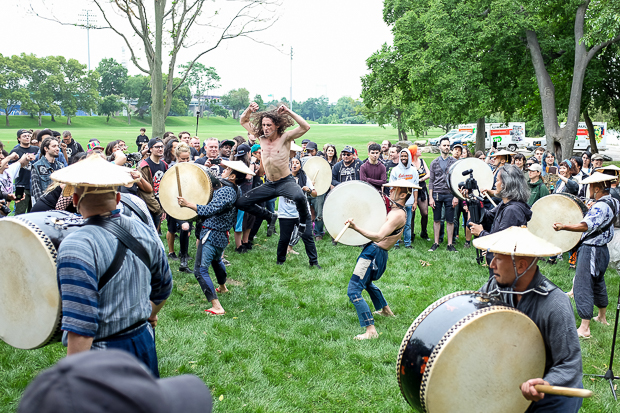 Words & Photos: Mike Petzinger
This past Saturday I had the good fortune to attend and perform at Punk Island 2018. It’s something I have been looking forward to for a while – this is the first year I have been able to get to one at all without some nonsense prior-obligation popping up. Similarly to everyone else (I assume), there was a bit of suspense regarding the weather forecast too, but in the end, all was well and the show went on.
For those unfamiliar with this event, Punk Island is a multi-stage DIY-style music festival that takes place all day. This years was on Randall’s Island. The setup and general vibe is no-frills rock and roll. The stages are just spaces to play in the same way that any basement is a place to play – a few amps, monitors, and soundboards under tents. Maybe some plywood or pallets as a floor, but that’s about it. But really, what more do you need? (Any festival that doesn’t require 90% of the crowd to view from a TV monitor is a pretty big win if you ask me.)
Between the 6 stages something in the area of 75 bands performed throughout the day. The number of performances going on was staggering. You can’t walk more than a minute or two in any direction without hearing something new and getting drawn in. Often I would set off for a specific stage only to get sidetracked and see a totally different act on a different stage on my way.
I think that phenomenon was great. I was drawn to see sets I wouldn’t have otherwise caught by hearing a good song, wild crowd, or interesting sound – that last one is doubly true when it comes to drums booming across the festival, as evidenced by MAAFA’s drum kit-and-goblet drum combo and the Seppuku Pistols’ uh…well…full 12+ person drum orchestra.
This is all great of course, but just as notable is the overall vibe and community spirit evident throughout the day. Similarly to the stage setups, everyone’s general attitude was comparable to what I feel you usually find at a good, grimy basement show. Essentially it’s friends supporting friends, even if you just met – shout out to the guys from Arson Welles that offered me a lift around Icahn Stadium (It’s too bad that random dude that gave us directions was wrong though…) And as many new friends as I made, I also saw plenty of old friends from all around the greater NYC/NJ area.
All in all, Punk Island 2018 was a great time. I just wish my full-size DSLR fit into my bass bag. Oh well. I’ll definitely be heading back next year – screw obligations; make your plans around this thing.
Baby Got Backtalk