Cornelius and the Sensuous Synchronized Show tour US 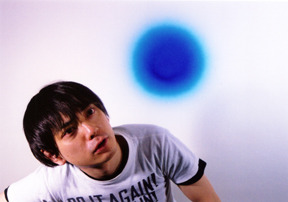 Cornelius, (aka Keigo Oyamada) is coming to America. He blows the tops off arenas in Japan with some of the most innovative live performances in the world, with laser shows and headphone options with auxiliary beats broadcast in real time. He's remixed with Beck and commissioned music for Momus.

SENSUOUS, his first LP released state-side in five years, is coming out on Everloving Records (ouch, Matador, ouch), in conjunction with a ten-stop tour that includes Coachella and Arts Festival. He's booking it to Europe for All Tomorrow's Parties and the Sonar Festival after.

The tour is dubbed “hybrid entertainment”, where the concert performance and some shadowy “visual image” collide a Wagnerian “fully-realized equal relationship”. (You mean, like, “multimedia?”).

At any rate, it will probably be some of the best music/performance in the states this spring.

SENSUOUS is out April 24