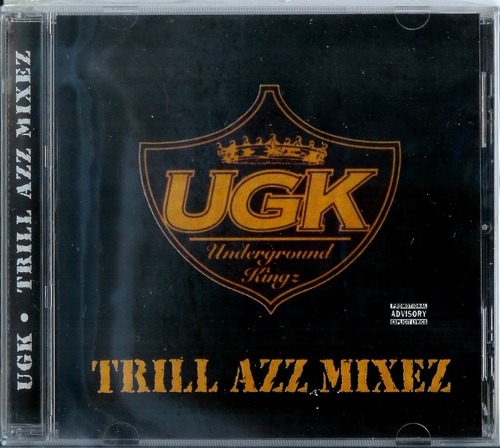 First of all, I have to give immense props to SouthPeezy at mauricegarland.blogspot.com for making this post happen, and more importantly, making every single UGK fan in the world incredibly happy by providing us with this mixtape. I was unaware of Trill Azz Mixezbefore his post lit up the rap blog-o-sphere late yesterday.

In the original post, we hear from Bun B just how important this mixtape was for UGK and how Pimp C totally dissed The Roots in “Top Notch Hoes”.

Bun B: Trill Azz Mixez was originally conceived by DJ Wiz in Nashville. He begged us to do it. This was back when mixtapes were actually “mixtapes” and was only available in mom and pop stores. Wiz used to do a lot of Cash Money and No Limit mixtapes and he always wanted to do one with us. We'd always just be like “yeah, aight, whatever.” But, when we started having all of the label trouble we said we should do a mixtape and go ahead and put it out with Wiz. After it came out everywhere we went, people wanted it. We'd never have enough copies of it. To this day we still don't. We'd always talk about bringing it back and re-releasing it. We actually did shows in the Midwest and the majority of the show would be based off the mixtape. It created income and we sold them at shows. Big up to DJ Wiz, he was an undying supporter of UGK. He helped us understand the scope of our spread. Doing that tape with him is the reason why we put the UGK logo big as hell on all of our CDs now.

Everybody wanted “Top Notch Hoes.” We got shows off that song. That’s a hardcore UGK song. You came up to us tell us that was your shit? We knew you've been rocking with UGK for real. I'm not sure what or who's album that was for. It might have been for Kool Ace. I think “Top Notch Hoes” was supposed to be another Kool Ace song. Kool Ace was a big friend to UGK. When we recorded it we considered holding on to it and putting it on Dirty Money but we said fuck it because we didn't think Dirty Money was ever coming out.

Yeah, Pimp was talking about The Roots on his verse. Bygones are bygones now, but yeah, he was talking about them. He thought they were shooting at Too $hort in the video. And you know how close they were. Pimp was always taking up other people's battles. He never really had any proof that they were dissing him in the video, so when he says that line “I saw your video nigga sound like you dissing my friends” I'd be like exactly! That's what it “sounds” like, you don't really know. But Pimp actually liked what The Roots was doing, he always talked about having a live band on stage with him. They probably never knew Pimp was dissing them or ever did, I guess they do now. The only reason he said that was because he thought they were dissing $hort. Pimp just like to say things to get under people's skin, including mines.

As of this morning there are no anti-UGK posts at Okayplayer, but please give it time. And once again, to read more about Trill Azz Mixez, hear preview tracks and download the album, please visit mauricegarland.blogspot.com and leave a thank you message to them boys while you're at it, because it's not everyday we get such a great piece of hip hop history just handed to us.