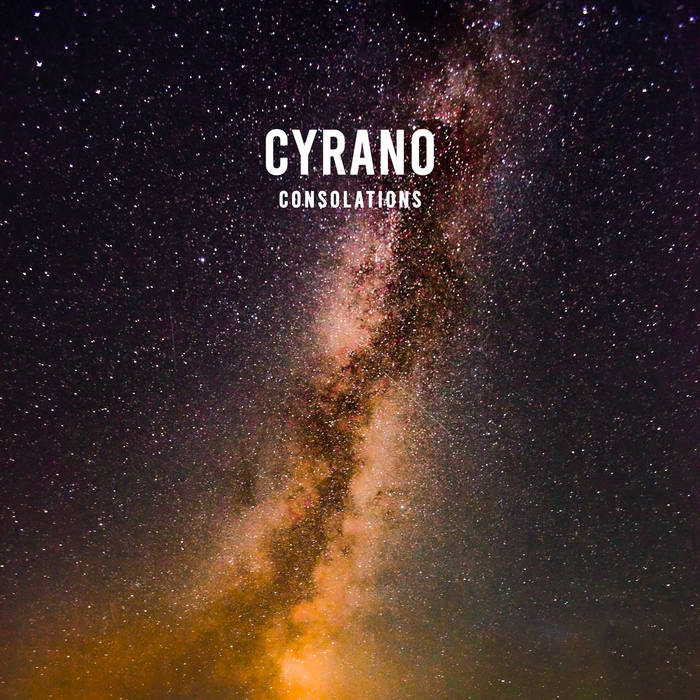 Multi-instrumentalist and producer Cyrano releases his debut EP Consolations, a collection of introspective songs that blend mellow indie-guitar music and programmed drum samples alongside organic live drums. The first single off the EP sees Cyrano lay down his warm and raw vocal delivery over a bed of downtempo drums accompanied by rich gliding piano chords. The track quickly turns into a dance-leaning number, reminiscent of early Example with the syncopated synth stabs, upbeat drum loop and distorted active bass line.

“Plaster” is a euphonious track driven by live drums and lush synth pads, exploding in the chorus with electric guitar riffs, rumbling bass and thumping drums. Meanwhile, “Collateral” sees Cyrano create soothing, slow-burning indie-rock layers through smooth rhythm guitars. The narrator confesses to their lover that they are “making it harder for you to love me”. Cyrano builds on it during the chorus with his vocal “oohs” over a jungle drum groove and reverb-soaked lead guitar. The last track off the EP is “Afterburns,” a six-minute long track that does exactly what Cyrano sets out to do: “create music for late-night overthinkers.” ‘Afterburns’ showcases the multi-instrumentalist indie-rock influences accompanied by rich synth pads. The narrator of the track promises their lover that “all they ever wanted was the words in your eyes…”

Cyrano states, “To me, the afterburns of a relationship is when the coals are on the fire, and you’re wondering whether to give it another stoke for a flame. If you spend too much time thinking, it’ll just fade away.”

Cyrano has created a personality test, which, depending on the results suggests either an introvert or extrovert mix of the single “Afterburns.”

“When I was living in Singapore, I was reading a book by Susan Cain called Quiet about introversion and extroversion. At the same time, I was listening over the various mixes I’d been sent of ‘Afterburns’ and I started to feel these qualities within two of the mixes. One felt like the type of song you’d want to sing along to in a festival crowd while the other felt like one for your earphones, and a moment for yourself.”