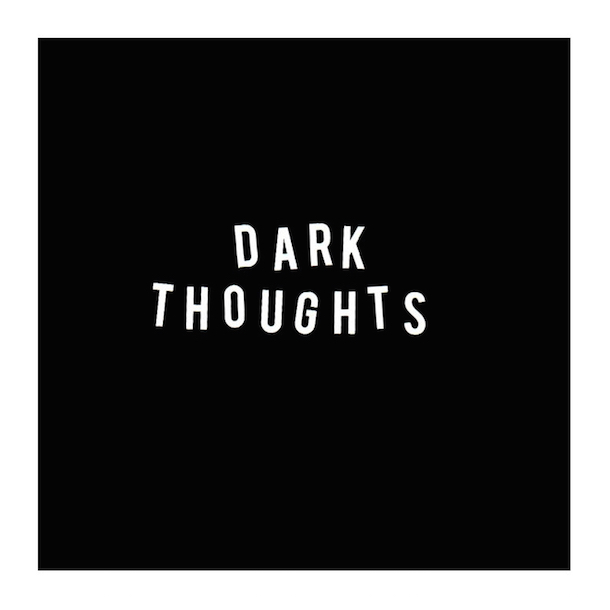 Philly trio Dark Thoughts have been hovering in the city’s punk scene for some time, popping up on bills with acts like Blank Spell and Sheer Mag. Two years ago Cynthia Schemmer of Radiator Hospital told Impose that Dark Thoughts was “absolutely a band to be anticipated,” and since then they’ve released a handful of ripping, melodically driven demos and, now, and album that confirms that suggestion.

Dark Thoughts’ self-titled LP is twelve tracks that altogether total less than 20 minutes—there’s no time for a breather, but it’s all so immediately catchy that you wouldn’t want one anyway. With a sound that feels like The Ramones stirred with a good deal of power pop from the last few decades, there’s an irresistible draw to these songs. The lyrics are blunt, and Jim’s voice shifts between a distant shout and a more direct, intimate tone as he traverses the woes of love and debt: your standard topics, but the delivery makes it newly affecting. The threesome takes a sweeping approach, covering wide ground over the record’s brief course. “Identity Crisis” is lightning-quick with its constant crash of cymbals over burning downstrokes; “The Sound” opens up from a bass-and-drum groove into a count-in to some surfy riffs and then into Jim’s question of “Are you still listening?” over a steady stream of scuzz. All the while there’s a tight melodic sense, and the record closes on a light, summery chorus of ooo‘s. Though Dark Thoughts do run through some darker thoughts, these songs ultimately feel brighter than the name lets on—they’re just a joy to listen to.

Dark Thoughts is out now via Stupid Bag Records, and you can stream it in full here. Guitarist and vocalist Jim Shomo offered some of his thoughts on the band via email—you can read them below.

Mind introducing Dark Thoughts? How did you form?

Dark Thoughts is Amy on bass, Daniel on Drums and myself (Jim) on guitar and vocals.

About a year and a half ago I had been writing songs for another project called The Holidays, (a sort of Ramones-y solo thing) and I had written some more melodic sounding songs for that project but that didn’t really fit with what I was going for. But I still liked that songs and I thought that it would be cool to kind of expand them into another different band. Amy and I had been friends for years and had talked about playing a few times, and then Daniel moved to Philadelphia from Orlando right around the same time, so it sort of just took off from there.

I’ve heard your name around the Philly scene for a while now. Any Philly bands you’re especially excited about right now?

I think that POLLEN is the best punk band in the city right now. They are so good live and their demo is insane. They just recorded for a 7 inch EP that I think people will be freaking about when it comes out.

On kind of a completely different side of that spectrum I’m also really looking forward to the new Cynthia Schemmer LP. I got to hear a little bit of it as it was being mixed and it’s definitely a really special record that people should keep their eyes out for.

Philly has had a lot of really great things going on for a long time now and I’m excited to be a part of this city and it’s punk scene especially. Everyone in Dark Thoughts plays in a few other bands as well as books or helps out with shows in Philly. I can’t really imagine living anywhere else, it’s the best.

An obvious comparison would be The Ramones—kind of reminds me of Tony Molina’s music in the melodies and the conciseness of the songs too. Is there anyone or anything less obvious you took your cues from on this record?

Words can’t accurately describe how much I love The Ramones and how much of an impact their music has made on me. I don’t think that REALLY sounding like the Ramones is very easy or obvious at all, so to be compared to them is pretty much the highest compliment that we could get as a band. You can look for other things and it’s not like we all don’t listen to a lot of different bands but at the end of the day DARK THOUGHTS is a RAMONES band. Period. I hope that makes sense?

Who’s singing the additional vocal part on “Ain’t No Love”?

Your only tag on bandcamp is “punk.” Loaded question, but what’s punk to you?

Hahaha, I think that a question like that is definitely meant for an entirely different type of interview, but since the space is here I think I’m just going to use this as an opportunity to thank all of the really great people in punk that we have met and dealt with in this band or in any other circumstance. You all know who you are!