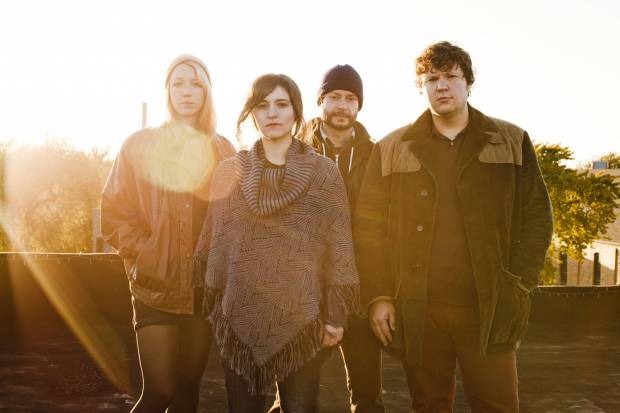 Chicago's Speck Mountain premieres an exclusive listen to their driftwood and salvia-divinorum-smoked album, Badwater. Following up their 2009 full-length Some Sweet Relief, Marie-Claire Balabanian and Karl Briedrick continue their wandering eyes and ways from the badlands and into the Badwaters where storms and elements test relationships and souls, and weary eyed quests for fresh visions present the group's evolution from a duo to added recruits that deepen their mountainous, wild-western soundscapes.

“Caught Up” catches you up to the band's expansion from a two piece Speck to a larger Mountain with the additions of Chin Up Chin Up's drummer Chis Dye and organ commander Linda Malonis. The opener features Dye's driving rhythms, rain drop keys on window glass, with Briedrick's guitars shining spotlights on Marie-Claire's declarative delivery. “Flare” ignites the album, bonded by Malonis's pentecostal keyboard chops that work like a home spun organ canvas for the signal fire cool chant refrains of, “she's a come on, come on, come on, come on,” and Karl's crisp, wave formation guitars.

Captivating the hearts and emotions of the music listening populous as of late is the heavy slow drift of their single, “Slow So Long”. Balabanian and Briedrick paint the isolated world of co-dependencies through cold sparse guitar slow chord picks that illustrate the burdens of dead ended dead weights carried around so long, and perhaps too long. “Can't seem to find our dreams in a needle's eye, always back another night without knowing why, so tired of getting high, it's the same every time”. The polar chill moves further down the ambient ravine stream trails on instrumental interlude, “Coldpoint”, followed by the title track “Badwater” that echoes one horse town twangs and outlaw taunts like, “cause I know bad water runs through…you…” that lift like campfire smoke swirls into the sky.

The dusty Mountain road continues on with the search for “Young Eyes” to fulfill existential voids and bring new realms; “fill my dreams, places I can't find”. The Chicago crew keeps the coal embers burning on the, “can't say I cared for anything”, attitude/philosophies of “Live it Down” that comes to a climatic guitar shredding-shoot-out. Keeping the desperado put downs slow and steady, “No Words” with sneers of “what you've got of what I'm not”, that carries us toward the six and half minute finale, “Watch the Storm”. “There's a south wind coming, stronger than our love, it's a forecast we can't talk our way out of, we used to walk for days, now the sleep running through our ways, it would take an act of God to wake us up”. The album's bad weather gazing curtain call serves as both Badwater's centerpiece and raison d'être that encapsulates the entire album in one song alone. Here Balabanian measures the elements against tales of loves gone wrong, Briedrick hits the floor with gentle electric strums amid the smoke machine haze from Malonis's organ dry-ice-drone with Dye keeping the pace tapping in time.

The third Speck Mountain album Badwater comes out January 22 from Carrot Top Records. You can also catch the Chicago quartet on the following US tour dates: