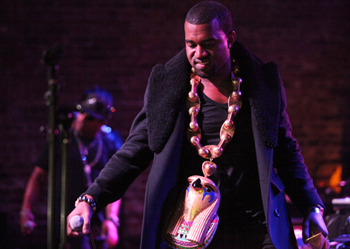 As underwhelming as CMJ felt for the majority of the week, Saturday's surprise performances at The Fader Fort and Pitchfork's #Offline attempted to salvage our waning interest. But who won?

Catching a ride with yacht-enthusiast friends La Sera in their cop car rental, I arrived outside the buzzing Fader Fort. I never found the illusive “clusterfuck” this week as Fader's claustrophobia was central to the open bar lines. (Is it wise to mix vodka and Vitamin water? are there electrolytes?) In time for Freddie Gibbs, his set felt all too brief, but was worth it simply for his interpolation of Whispers' “Rock Steady” into “we were slangin' rocks… steady.”

On my journey there I learned the wacka-flocka-lame news that Waka Flocka Flame canceled due to illness. Suffering through a set from OFF!, I stuck around for the free booze and the suspicion that a surprise guest would save Fader's rep. Theophilus London took the stage, which was a welcomed treat as I could not concede to patronizing his Urban Outfitters performance earlier in the day.

Did the bar close early? I don't remember, but I was sorely disappointed in the departing crowd while Theophilus performed. Those who stayed jammed out hard, or maybe it was just me, to “Calypso Blues”.

MTV VJ Sway should be commended for his snitching. In his live Runaway interview with Kanye he leaked the information on Mr. West's #Offline secret performance at Brooklyn Bowl. Ryan Schreiber was bummed he missed us (ditto, buddy), but I'm glad his event was easy to infiltrate. I arrived to a CyHi Da Prynce set with A-Trak, got a drink during “Ray-Ban Vision” and if memory serves correct, Kanye brought the house down after CyHi's verse on “So Appalled” – this shit IS fucking ridiculous.

Kanyeezy tore through his G.O.O.D. Friday jams, “Power,””Monster,” (it's wild hearing 600+ voices sing “I put the pussy in a sarcophagus”) “Devil In A New Dress” and closed with “Runaway”. I kept hoping Pusha-T would blow the roof off by coming out for his verse, but no dice. As groan-worthy as Kanye's lyrics can be, as much as I don't want to grant him “genius” labels, the unwitting humor of hearing a chorus about douchebags and full-time jerk-offs sung in elation in a bowling alley could never be calculated, but deserves admiration.

Oh yeah, GZA dropped “Liquid Swords” and ODB's “Shimmy Shimmy Ya” on our unsuspecting asses. I truly have little-to-no recollection how I made it out of #Offline. In this VS. match-up I'm giving the Best Saturday Secret Performance Award to #Offline, Fader Fort wins Best Open Bar and (drum roll, please) the Winners of CMJ award goes to Impose because that's what our founder was yelling out of a cab window at 5a.m. on Sunday all the way to Park Slope.