Height With Friends, No Gunshots At Our Parties Vol.1 & 2 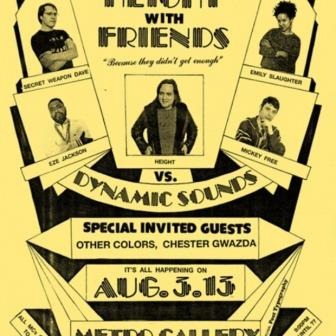 No matter the sea changes in hip hop, the controversial eras that arise only to devalue its cultural salt, and the homogenization of its principles, at the heart has always been expression. It was still alive in early films like Style Wars and Wild Style. It was alive wherever Fab Five Freddie took it in Manhattan. If Jazzy Jay was there; if Bambaataa was there; if Flash was there; if Busy Bee was there; if Theodore was there; it was alive and well. Much of that history though was loosely documented on tapes that exist in the hands of collectors.

Whether you hear rap or rock in listening to Wham City's Height With Friends, the mix series Height is calling No Gunshots At Our Parties will put to rest any kneejerk dismissals of the Baltimore group as tourists in hip hop. Height's done his hip hop homework, digging through the archives compiled by Tha Foundation and Old School Hip Hop blog to create a personal favorites list that spans live sets from '78 to '83. Height had the following to say about his appreciation for the tapes:

There are a few things I love about the tapes. I love how there are beats and rhymes and routines and everything else, but there aren't really songs. I think of the earliest form of hip-hop as something beyond songs. They created this whole other idea of music where the rhymes just go off on their own trajectory over this bed of beats that is always morphing into the next thing. Musically, I don't think hip-hop can ever be as wild and revolutionary as it was in its first phase.

I love how the tapes mess with my sense of time. Sometimes you'll hear, say, Busy Bee rapping on “Apache”, then some feedback, then silence, then Spoonie G in the middle of a verse over jungle jazz.. Has five seconds passed? Five minutes? An hour? Is it a whole other party on another day? In that sense, it makes me feel like I'm watching Pulp Fiction for the first time.

Lastly, I like listening to something that wasn't created to be listened to later. When Kurtis Blow says, “please, do not stand on the tables in the back. We cannot continue until you get down off the tables.” That's a very real moment that you wouldn't hear on a studio album. You're hearing real humans existing in reality, which you don't always get to hear on a current rap album.