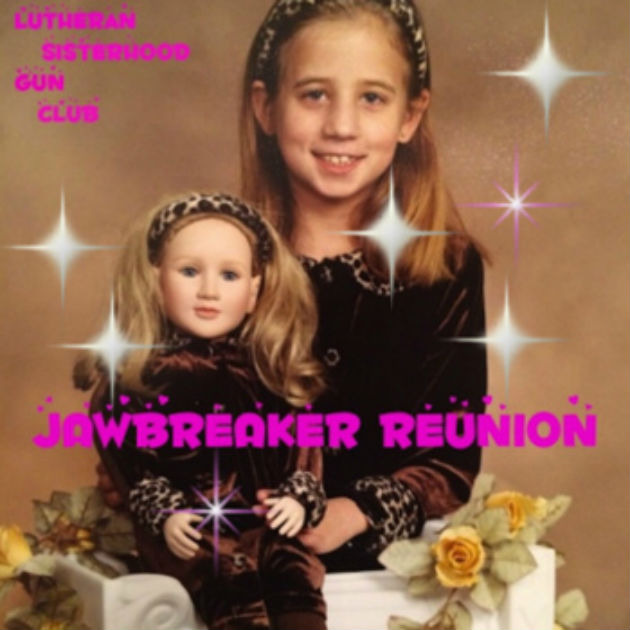 IF YOU WANT TO TRICK TON OF PEOPLE INTO SEEING YOUR CRAPPY BAND, JUST RENAME BAND “JAWBREAKER REUNION”.

Now that that’s out of the way, we can move on to the music itself.

Jawbreaker Reunion’s Lutheran Sisterhood Gun Club is a wonderful release that keeps itself short and sweet with ten songs, clocking in at just under twenty minutes of upbeat music for sad and anxious people.

“Sad and anxious” may be reading a bit much into it, but the self-defined twee band handles some heavy topics such as terminal illness (“E.M.O.”), sexual harassment at shows (“Jeggings”), and social anxiety (“Straightedge Revenge”), also mixing in songs about love and friendship. These heavier topics are often relayed with a light touch, though, through playful lyrics such as these lines from “My Own”:

And of course he didn't call
As if I was twisting his arm
I'm not looking for prince charming
Just a fucker with some charm.

It would be easy enough to slap a “garage rock” tag on Jawbreaker Reunion and wash your hands of it, but the band singles itself out nicely. Dre provides some country-fried drumming that sounds at time like a locomotive speeding out of control, while Lily and Bella’s twin guitar attack can hit a bit of the jingle jangle, as on “Laughing Alone Eating a Salad”. The four piece works very well together and some songs will get stuck in your head faster than you can say “Phineas Gage”.

Lutheran Sisterhood Gun Club as a whole rounds out to sounding a bit like life itself. It can be funny or sad, happy or angry, introspective or outgoing, but it’s always catchy and the use of humor to explore serious topics should be welcome to people who use humor as a coping mechanism.