Year of the Glad 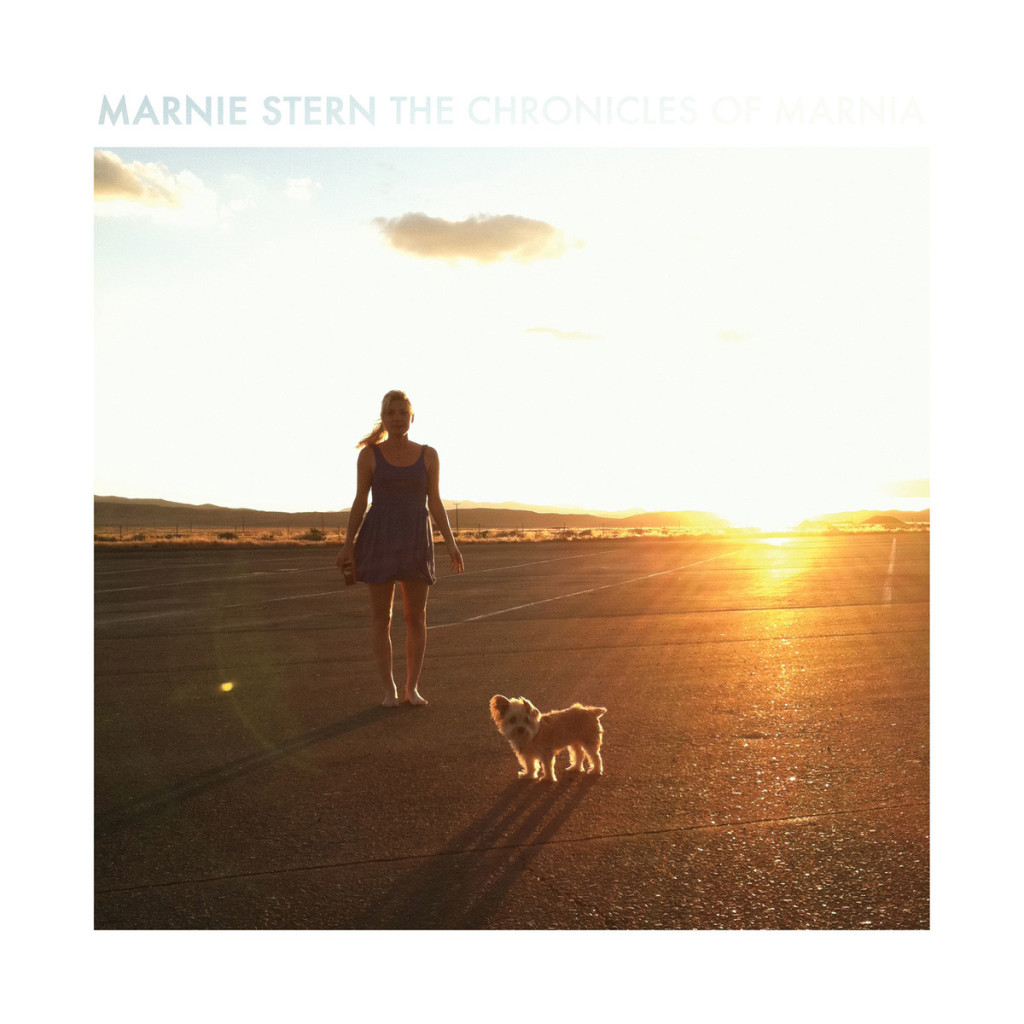 This Is It and I Am It and You Are It

I’m driving over the Manhattan Bridge and it’s the day after Christmas, the best of all days in the year to drive in Manhattan. I’m speeding, racing past tourists who chose shopping over communion, and I'm listening to The Chronicles of Marnia, an album that has lived with me since it came out in March on Kill Rock Stars. The songs remind me of those drawings of old men that look like beautiful women when you turn them upside down. My head is being turned upside down and I'm listening to it through every euphoric, deranged, depressed, manic lens that has colored the last nine months of my life. A brilliant slice of white sun hits me square in my eyeballs, and I can feel a new lens taking shape. I turn up the stereo and roll down the windows.

As I make a left on Broome, the denseness of the throng grows, making it hard for me to drive as fast or with as much determination, but the timing is just right. Marnie Stern is reaching the refrain of “Noonan,” a poignant “Don’t you want to be somebody? Don’t you want to be?” and I glare at ever tourist that I see, squeezing my eyes nearly shut. They stare and I laugh, my mouth wide open, teeth like a piranha’s. New York is scary, they think. The women are as feral as hyenas.

I love it here. Years later and I even love the tourists. The music is elevating my heart rate, anesthetizing my doubt, proving that no, this town isn’t just a swamp of misery, it is whatever I want it to be. This is the theme of The Chronicles of Marnia, Stern's fourth and best album: written with restless life-affirming lyrics and twitchy fingertapping from the virtuosic fingers of a guitar goddess, this record has come to represent truth in complexity, proof that worthy challenges come shrouded in murky ambiguities. If you let yourself see both sides of a seemingly unforgiving coin simultaneously, you’ll find a balance somehow. When that feeling is combined with Stern's inability to sit still, her frantic dedication to the power of momentum, the record's goals become crystal clear. It's no wonder that the cover features the guitarist barefoot, pressed to the hard asphalt.

As Stern shrieks, “There are no coincidences,” a shred of light cascades down Broadway, and a swarm of grey clouds begin to cluster.

On nearly every track of The Chronicles of Marnia, there is a reference to either the passing or the capturing of time. Beginning with the profound “Everything is starting now” and closing out with “I’ve got time / in my hand / I’ve got time / all I’ve got is time,” we can hear Stern wrangling with how to find pleasure in the present while shooing away the pesky inevitably of the future.

In “Proof of Life,” Stern gives up pretending not to care about this task but instead softly admits, “I’m searching / but there’s so much I can’t see.” She pleads to a puff of green smoke, to someone who appears to be controlling the threatening hourglass in a mad real-life facsimile of The Wizard of Oz—“Give me a sign / give me a sign.” The complexity of everyday existence occasionally drags down Stern’s exuberance, and “Proof of Life” is appropriately the record’s only track to feature a piano.

Stern herself—as a figure, a female musician, a guitarist, a songwriter—is a complicated force, and that's a huge part of why I am drawn to her. In a promotional tactic for The Chronicles of Marnia, Kill Rock Stars instituted a Win-A-Date with Marnie Stern contest, a subject to which Stern spoke about on our radio show last month. Apparently the scheme went well, then came crashing down as the winner ending up breaking up with her in a long, messy email. My indignation regarding this matter is unresolved.

Pairing Stern's acumen with her guitar talent and ever-improving songwriting, I am confounded that The Chronicles of Marnia appeared to only grace one yearend best albums list—ours. (This is a hearty reminder that yearend lists are bullshit.) But I can understand it in the abstract—if you aren’t listening hard enough, hyper-toned weirdness can come off as an overplayed shtick by her fourth outing. In a time where we’d rather hide behind avatars and eschew earnestness in favor of inside jokes and memes, the world that Marnie Stern exists in is pretty damn threatening. She’s aiming to tackle our denial with self-awareness, questioning and pleading her way through a real life, a life that is really fucking brightly lit.

On “You Don’t Turn Down,” a song whose low-end guitar slices back and forth like an ergonomic two-handled cheese knife, Stern rambles through a block of lyrics that sound like a drunken journal entry.

This frantic soliloquy is cut off by “‘What took you so long?’ they said out loud.” That lyric has always struck me as a conversation between Stern and her fans. It’s a bizarre release to hear Stern rail like that—that’s when she is at her best, when she is at her most honest. Ending a credible stream of consciousness with clarity is a rare talent, and Stern, as unsure and vulnerable as she sounds, always has it right in her back fucking pocket.

All My Life Is Based on Fantasy

This was supposed to be an essay about how I’ve had a really shitty year so I took up running. This was relevant to The Chronicles of Marnia because I listened to that record when I would go on long, frigid runs through the farmland of South Jersey when I was living at my parents house, an image that’s even too much of a sad-girl-cliché for someone like me to conjure up. In preparation for writing, I listened to The Chronicles of Marnia on a run last week and found that—like the old man/beautiful woman sketch—I had a different response to it while heaving down the pavement in Brooklyn, nearly twelve months distant from 2013’s beginning.

For the uninitiated, running is for idiots, but amazingly, so is introspection. In some worlds, that’s why running can be so much fun—it exists by the simple principle of just going, and nothing else. Maybe you have to go out and buy a pair of snazzy New Balances first, but ultimately, the only thing you really need in order to start running is the will to move forward. Pretty heady stuff when you think of that in terms of moving into a New Year. I may have had a self-described “rough year,” but that’s only when I think back—if I project forward, 2013 didn’t really matter. It just existed. It happened. It’s over.

Both my mother and the entire cast of The Real Housewives of New Jersey are still alive, and I’m healthy enough to be writing this, so 2013 wasn’t bad at all. Running through the wild space of a NJ farmland while yelling along to Marnie Stern’s bubbly shrill voice is actually pretty perfect, a stupid gift that I don’t really deserve. And yet, lyrics like “Immortals don’t die” and “Too much hesitation / just go out and make it” were the lines that helped me push forward, both on the open, abandoned paths I took while running and in my banal day-to-day. The Chronicles of Marnia is one of the most hopeful records to come out this year, and it still isn’t blind to the complications that life can imbue.

On my early winter runs and in that car over the Manhattan Bridge, I felt loose and carefree and optimistic, which I think is the aim of The Chronicles of Marnia. When Stern punctuates “Nothing ever looked / so good / Nothing ever looked / so good”, that positivity and near mania is intended to be addictive, transfusing itself from musician to listener, through the colorful guitar noodling of Stern’s fingers straight into the pleasure centers of our brains. The song (the aptly titled “Still Moving”) ends with a harmonized lyric, a perfect thesis statement and a revelation that Stern consistently comes up against: “No one ever really understands anybody else’s life.” True as that may be, there is no doubt that when we commit to moving forward, we get closer to understanding our own lives, all the better to understanding each other's. This momentum—like Marnie Stern's as she takes off running—is all we need.