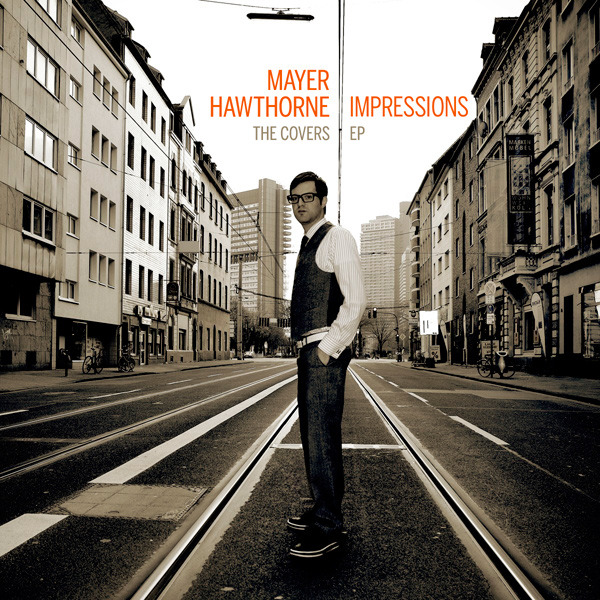 Mayer Hawthorne excells at covers. His cover of James Pants' “Thin Moon” still gets heavy burn around these parts, as Hawthorne's vocal range is just a wee bit wider, finding a frequency that could transmit to the moon's surface.

Today Hawthorne and The Country, his trusty backing band, dropped the Impressions EP on that graveyard known as RollingStone.com. The EP is a collection of collected favorites from digging through crates or just digging through electro-funk to pull the core ballad from a Chromeo song. Mayer Hawthorne was kind enough to provide a brief story noting the significance of each track, like how he doesn't understand Charlie Kaufman's Synecdoche, NY.

This one features my live band, The County: Quentin Joseph on drums, Topher Mohr on guitar, Quincy McCrary on piano, and Joe Abrams on bass. It was recorded live in a radio station studio somewhere during our Winter 2010 US tour. The tapes recently surfaced, but nobody can remember exactly where we were. The song is originally by The Isley Brothers, and that's the only version I was familiar with until we started playing it in our live shows and people would come up to us and say “hey, loved your cover of Average White Band!”.

My favorite track from Chromeo's latest LP. On the surface it's an electro-funk, dance floor filler, but underneath is a brilliant love ballad with lyrics that reminded me of something from Tyrone Davis. Dave1 (of Chromeo) told me the song is about a guy who falls in love with a ghost, so I wanted my version to have an eerie, ghostly feel to it. Quincy McCrary played the creepy piano solo at the end.

03. The Festivals, “You've Got The Makings Of A Lover”

Textbook Northern Soul from a little known Dallas, Texas group called The Festivals. I was digging for records in NY with my homey DJ Kurse, and the shopkeeper played the 45 in the store. Both of us immediately ran up to the counter and said “yo! what is THAT?!”. The original version was recorded in the late 60s, and the mix isn't very good. I wanted a version that I could bump. Quentin Joseph played the drums and we recorded them at Sam Beaubien's studio in Detroit. That's Sam playing the trumpet as well.

This song was written and composed by an amazing man from Pasadena named Steve Salazar. He was born with a heart condition and passed away at the young age of 27. Before he died he recorded one incredible album of demos in the mid-70s with a band called Shorty's Portion. Peanut Butter Wolf found a copy of the album and I loved it so much that he gave it to me (thanks Wolf!). The vinyl had a handwritten note tucked in the sleeve that was addressed to anyone who could help the band with management, a record deal, radio airplay, etc. I'd estimate there were less than 300 copies pressed. That's my Dad playing pedal steel guitar on my version.

Jon Brion is not from this planet. He penned this song for the soundtrack to Charlie Kaufman's film “Synecdoche, NY”. I didn't get the film at all, but I really got the soundtrack. The original has only female vocal and piano, but I always heard a larger arrangement. Hubert Alexander played some of the piano and I did everything else.

This one also features my band, The County, and was recorded live, in one take, in a tiny makeshift tent, at a festival in Dour, Belgium.