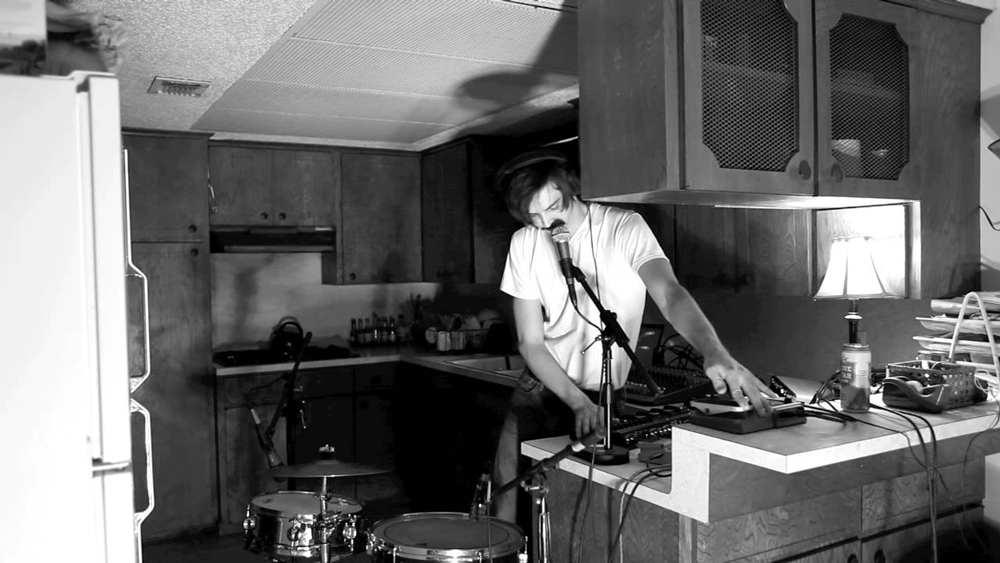 In an interview at last year’s Fun Fun Fun Fest, Texan “folk-dance-americana-electric-symphonic-fusion” artist Roger Sellers said that he basically wants to create music that makes people feel something. Sellers has always been ambitious—he’s a composer, lyricist, producer, director. . . everything but a DJ. With his upcoming album Primitives, the fourth he’s self-produced, he’s succeeded in elevating his work to a new level of emotionality.

The album is sequenced to be listened to as a singular piece of music, but each track sustains a palpable world of its own. “Lates” is meandering and atmospheric, echoing the larger climate of the album. Still, it features a strong driving melody that delivers a sustained feeling of relief. The track starts out serene with the hushed energy of a keyboard and Sellers’ breezy voice floating above. Then it opens out into a lush arrangement that includes a layered drumbeat, tambourine, some bright keys—all of which Sellers recorded himself. (Not to mention the chirping of a few birds.) He imbues the song with a sense of closure as he repeats, “The feelin’ has gone away.” Then his soothing, wordless vocal harmonies envelop the instrumentation until it all dissolves into calm. It’s the sound of clear air and things lightening.

Primitives is due out September 30 via Punctum Records. Stream “Lates” below, and keep scrolling to see what Roger Sellers has to say about his relationship with his work.

What inspired the title Primitives?

I spent a lot of time thinking about what I would name the record during the recording process. I usually try not to think too hard about a fitting title and just let it come naturally. This one proved to be a bit more difficult to find for some reason. I remember sitting on my porch chillin’ with my buddy Matt Toman as he came up with the idea “Primitive”. I thought this was perfect because I’ve always kind of viewed my music as somewhat primitive. Not in a bad way, but I’ve been strongly influenced by repetition, tribal type drums, and an overall simplicity, in which the grand scheme of the composition is more relevant than any individual part. I stuck with that but pluralized it to make it feel more like different sections of a larger piece.

This is your fourth album since your first release in 2010. As you’ve progressed, what’s changed about your approach to making music?

Each album has changed drastically from its previous. My methods have evolved throughout the years but I do maintain certain elements of melody, rhythm, and field recordings. Primitives was the first record that took me 6 months straight to complete, so my approach was much more focused and tedious. Most of the songs on the record have been written and performed for over 5 years. Therefore, much of the focus was on maintaining a fresh, new feel for me to have fun with and to maintain the energy of my previous live sets.

How about your taste?

My musical taste has also changed significantly throughout the years of recording. Many of the influences you hear on my debut album come from more acoustic, folky type music like Sufjan Stevens, Elliott Smith, and Jon Brion. Although the songs on “Primitives” has really been in development for 5 years, I’d say its been inspired by too many bands or artists to count. I can definitely say that the recording process was influenced by artists such as Steve Reich, Animal Collective, and probably Radiohead.

The vocals on “Lates” blend so well with the instrumentation. How do you approach writing lyrics? Do you privilege sound over meaning?

I often allow stream of consciousness when figuring out melody and phrases. Sometimes I’ll get stuck on a hook that really seems to work and I’ll write around it. This song is a great example in that the line, “The feelin’ has gone away” was my hook. I performed it hundreds of times, making up lyrics as I went around that one line and it almost always worked. It allowed me to sing freely and expressively without getting too far out of context. Once I started recording it I took time and wrote lyrics that I really wanted to be communicated.

Primitives is so multilayered, it’s like you’ve built a whole landscape through sound. What kinds of landscapes have influenced your work?

Minimalism has been a tremendous influence on my music. Although it seems much more prominent in Primitives, it has served a huge purpose in all of my music, including my first record. I’m fascinated by the idea of layering different voices of instrumentation in an often repetitious, yet, dynamic manner. Its all about detail. I tend to love music that allows you to fall into a looping groove yet actively hear what the composer is saying through poppy lyrics and expressive playing. Plus, layering sound is just fun, and I want to share that with my listeners.