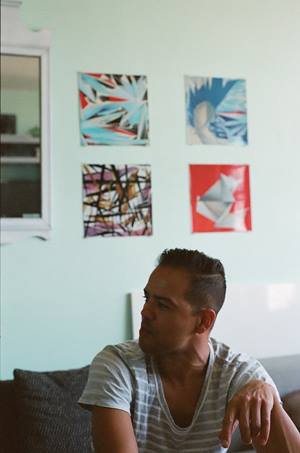 Hektor Fontanez is no newbie to the music industry. One of the founding members of Twi The Humble Feather–a New York staple–who have toured the USA and Europe with José González, he is also in New York band Imaginary Weapons. But Hektor is a newbie when it comes to his solo game, which is ready and raring to go. His debut LP Outsider’s Paradise is available on June 3rd on Dazzleships Records, but we’ve got the exclusive debut stream right here.

The album begins with “Shadow Maps”, a song that has a back track that is reminiscent of the sounds that flooded our ears playing on game consoles in the 80s or, more notably, beating Bowser in any one of the Mario games. When his voice hits the track, it reveals another–deeper–layer to it. “Beyond Fantasy” hits with a deep bass line, the song decidedly more dark. “Rushing the Hills” is more uptempo, sounding much like something we would hear on one of The O.C. soundtracks. It’s definitely got more of the warm weather vibe we’ve been craving so much lately.

“Building a Bliss Bond” is another interesting one. The instrumentals build up gradually, delicately. Hektor’s vocals are softer, higher pitched, and hold more clarity than previous tracks. It’s nothing short of beautiful. “The Saga of Oak” enters like a cartoon track, and we’re immediately tapping our toes. Hektor plays with several interesting overlays of sound effects on this one, and–because it’s like candy to the ears–we listened to it several times before moving on to track 6, “Art World Dynasty”. This song goes back to the aforementioned days of The O.C., a song that has a very Alexandra Patsavas-esque sound to it, and could be found in indie films such as 500 Days of Summer and The Perks of Being a Wallflower. This is another summer staple.

“Darkest Night” follows in a fashion we would expect of a track with that title. Eery noises overlaid with intense guitar riffs, and vocals octaves higher than what we would ever be capable of. It’s compelling, slow, and vibey. “Manic Sun” follows, and it–in it simplest form–a dance track. Hektor’s vocals almost float over the staccato notes in the track, very much video-gamey like “Shadow Maps”. “Baby Judas” plays with dark sounds and vocals mixed in with gorgeous strings. In fact, Hektor displays a full range of vocals on this track. Although it’s not something that would be easy to sing along to (on pitch), it’s almost got an interesting 70s vibe to it and is–interestingly enough–one of our favorites off Outsider’s Paradise. He wraps up his genius debut with “Lost Mornings”, a song that would be a butterfly if it were an animal. Deeper vocals, but simple, slow instrumentals. It’s the perfect slow down to the variety of genres and musical madness displayed on the album.

Hektor set out to make something unique and special with the insight he’s gained from his other projects. I’d say he’s accomplished that–and so much more–as his audience is now left to ponder what makes an artist an artist, acknowledging that you aren’t necessarily limited to one sound as a musician. Hektor leads by example in his experimental genre-crossing and eclectic collection of effects.