Trainwreck Riders, “House Upon The Hill” 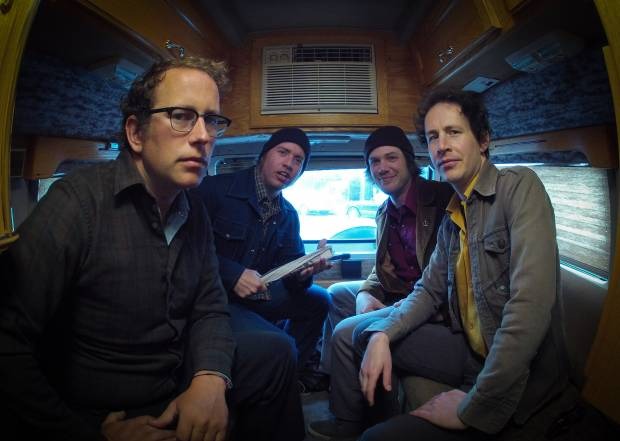 Trainwreck Riders have risen from the wreckage of adversities and premiere their new single “House Upon the Hill” off of their new album Ghost Yards. The quartet of Pete Frauenfelder, Steve Kerwin, older bro Andrew Kerwin and Shawn “Boof” Wyman have cut their teeth from playing the Bay Area's BART station circuit amongst fellow luminaries like Two Gallants to sharing the mainstage stages with Built to Spill or heroes The Meat Puppets. And not unlike their aforementioned contemporaries Two Gallants, the Riders have returned as a force of nature after the setback of having their tour van flipped by a drunk driver some years back.

The political and puritanical model of the 'city upon a hill' gets specific as the 'Riders focus on a man's journey to the fabled “House Upon The Hill”. On a mountain of guitar and violin strings, the band presents the rogue's gallery of a life misspent in the blinding beacons of metropolitan unhappiness. “There's a picture on the wall, that reminds him of the past, before them bright city lights, where no one smiles back.” While pedal steels and electric guitars howl along the tale, we get further insight into the character's secular appliance influences and desires left unfulfilled and fiduciaries left undone like dirty dinner plates. “He listens to the refrigerator, and it tells him how to think, he left his need in the laundry, laundry and there's dishes in the sink.”

The verses end with the internal narrative inquisitions of, “what you gonna do about that” that propels the man along the steep road to redemption and righteous living in that abode of many mansions. And like the fool trying to get to heaven in a Ford pick-up without directions, the Trainwreck Riders present a contemporary parable of trying to drive a motorized camel through the needle's eye after the clocks have stopped and the moment of truth has long passed the weary pilgrim by. “Where it stands and where he lands are two different places. No it ain't fair, that the time share, has been time that has been wasted, but the time has been wasted.”

Then on “Gypsy Stealin'”, they take the city by the Bay's tradition of turning Americana twang into an alternative electric hootenanny. The quartet continues the time honored, New Riders of the Purple Sage-cosmic visions-of-Jerry Garcia tradition of reconfiguring musical roots into the contemporary mind frames. Pete, Steve, Andrew and Shawn show the writers' hands like, “hard to find the words that won't come across so jaded”, promising not to waste any more time concerning their choruses with the thieving “Panama Red”-styled 'gypsy boy' protagonist. “All that time that you have been stealin', will catch up with you wherever you dwell.” And all the while the boy's heart beats across the sea for that gypsy girl that he hopes will some day return, as the band plunges into what is the best hybrid of traditional progressions fed into Marshall stacks you have heard all year.