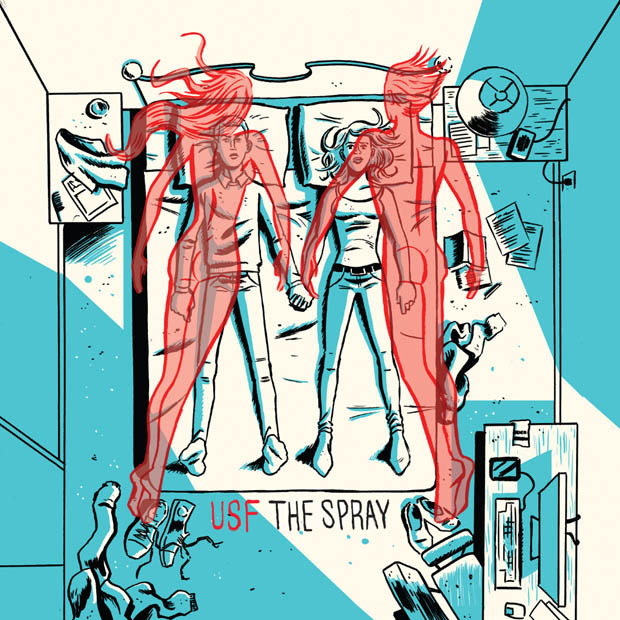 Seattle's USF (Universal Studios Florida) released a texturally striking pop album yesterday, on Portland's Circle Into Square, completely based on and titled after a Jonathan Lethem short story, “The Spray”. The story is about a young couple who get robbed, The police come to help them file the report and the couple can't figure out exactly what was stolen. The police use a spray, apparently a new invention, that shows the invisible objects that were taken as glowing, salmon-colored holographs of their formerly-placed selves. It's an entertaining read.

The goal of the album, according to the band, was “to take little fragments of Lethem's story for the titles of our songs, and then ascribe certain tones and textures to them individually, in a way that cumulatively expresses the story's milieu and spectrum of emotions.” If you begin to play the record and read the story at the same time, you will finish the story about halfway through the third song, “Let's Just Hide It”. All the song titles are short phrasal quotes from the story.

It's an interesting concept, the idea of expanding on the emotional tone with instrumentalization, which can only convey tone. It's sort of like looking at one of those pictures of a bullet going through an apple; where the bullet enters, we see only a small hole, and entrance point, but where it exits, we see apple guts spraying everywhere, in a circle, around the bullet itself. Art, literature, movies, music, and whatever else can only enter us through our small holes – it's how powerful our exudation is that matters.

You can read the band's full interpretation of the story and their meaning with the songs on their Soundcloud page, but I would suggest reading the story first, for context.

USF and Circle Into Square have generously agreed to give away a copy of the record. To win, go “like” Impose on Facebook, than leave us a comment telling us why you are the most deserving. The contest ends next Wednesday!