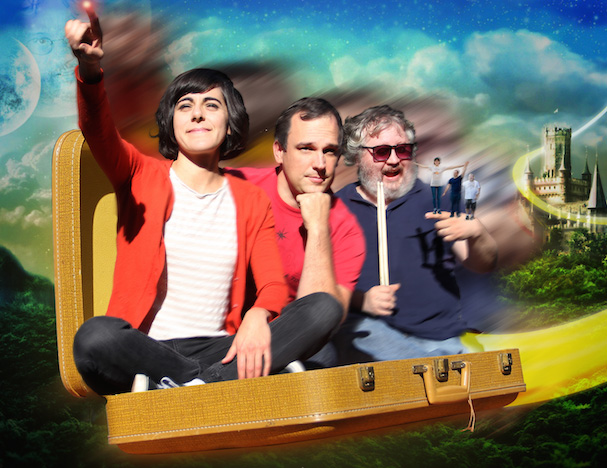 Growing older is hard for punks, not least because the circle pit’s gravity weakens: you drift from its central maelstrom to the edge, then further out towards the periphery, and eventually your old moves—that deftly timed fist thrust, say, or the once effortless-looking spinkick—are just part of a joke about your plans for the Turnstile show that turns out to cost too much, anyway.

And if you’re in a Wimps song, younger punks might mistake you for the landlord. So goes “Old Guy”—a track from Suitcase, the Seattle trio’s second proper full-length and first for Kill Rock Stars—and Wimps explode the ageist assumption.

Wimps material tends to grapple with quotidian injuries, like showing up for work, and a litany of attendant neuroses, all colored by properly petulant and dejected vocals. But the snappy, lean songs, never so intent on wallowing as to neglect sneering hooks, also celebrate the restorative power of a party, which brings us back to “Old Guy”.

Set at a soiree where attendees mistake the narrator for a landlord or a parent, vocalist Rachel Ratner emphatically denies any such allegations. And in fact, her response demonstrates a firm grasp on playing party etiquette to one’s advantage: “But hey kid, could I borrow a beer? I already drank the one that I brought with me on the way over here.”

“We typically tend to write songs that directly relate to our day to day lives,” Ratner writes in an email. “We’ve all been playing in bands for 10-15 years. As we’ve gotten older we’ve noticed our contemporaries, bands we play bills with, and folks attending shows, have tended to remain in their twenties. In the same vein, our peers, folks in our own age group, while still loving and supporting music, due to jobs and families, are less able to go out. As such we often find ourselves at parties or shows where we feel like we’re noticeably older than everyone else. So that song’s more of a tongue-in-cheek reflection of that scenario: where we find ourselves at a party and are mistaken for someone’s parent or the landlord or something.”