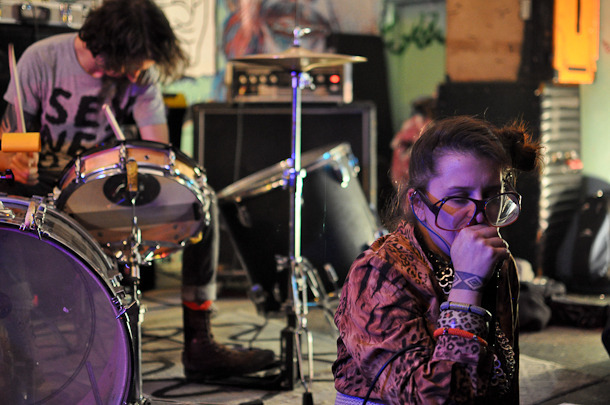 AIDS Wolf officially announced their breakup on their Tumblr late last night. The band had been rumored to be on their last American tour during the last pass through the states, but at that time the word on the streets was that it was simply due to visa garbage, and that they would continue to record and to perform in Canada. But today, we find out through a long and fairly emotional essay by Chloe Lum, the frontwoman, that this, in fact, is the end.

I am going to reprint the entire thing below. It's fairly emotional. But first I would like to say this: it's difficult to be a non-commercial but ambitious band in the American culture mill. AIDS Wolf are innovators, and we, as a group, will continue to lose access to innovators as long as the government and our collective unconscious keeps mounting barriers to their existence. The visa rules that Lum complains about are very real: that is why you are seeing way fewer foreign bands that are not government-sponsored in their home countries. The misogyny of the press that she complains of is also an issue. Hipster Runoff-ism is not an appropriate way to treat female artists, even ones who get naked for photo shoots (the guys in the band did too!). These and other barriers will continue to eradicate innovators, by running them down to the bone and exhausting them. AIDS Wolf had a good run, but other bands might break up before they have a chance to make their statement.

So my band broke up and I’m having a lot of feelings about it. I’m going to try to make sense of those feelings here.

My band is called AIDS Wolf and we started as a 4 piece noise-rock band in Montreal in 2003. Over the years with line up changes and the growing sophistication of our own tastes we became a trio in 2009 and started calling ourselves either Formalist/Unknown Wave or Abstract Rock.

When my beau and I started the band our expectations were pretty minimal. We’d already been in 2 bands together and each several bands before meeting. Him more of the garage and punk varieties and myself of the noise and industrial ones. We dropped out of university to do a major tour with one of our previous projects, to have one of our band-mates leave the day we got home. We’d already learned that relying on others for one’s creative pursuits was dicey even in the best circumstances. Besides, as Canadians we were geographically challenged on the touring side of things. We told ourselves AW would be a fun hobby and we’d play around locally and that would be that. But it wasn’t that. We started getting more involved and reaching out to American bands we liked to bring them up here and while accompanying them to play gigs across southern Ontario our fate became cemented, we become a touring band. A REAL band. The type of band we looked up to, the type of band we all went to see. It had previously had seemed so out of reach.

In the early part of the 2000′s there was a swell of noise-rock, noise and no wave influenced bands doing it seriously, some of them managing to find actual audiences. From Youtube clips of our early gigs we started getting contacted by labels in 2005, settling on Lovepump United & Skin Graft Records to co-release our debut album, The Lovvers Lp in January 06.At that point we started touring pretty much non-stop in Europe, the US, even doing a week of gigs in Israel in ’08.

We did our thing pretty modestly, sometimes getting decent crowds in the bigger urban centers, much less elsewhere. After The Lovvers came out music bloggers and journalists more or less collectively decided we were total shit and disingenuous to boot so after a rash of spectacularly awful reviews, we mostly got left alone by media. It didn’t seem to matter too much, we had our context, we had a crew of like-minded bands & musicians who were also interested in sowing a more difficult row.

And because things always change, that did too. In ’09 we stepped back after our guitarist Myles moved to the UK to woodshed as a trio with Alex. New rig, new songs and an goal towards greater abstraction. Alex Ross’s The Rest is Noise had been passed around in the van and as a trio, going towards more a formal and disjointed sound seemed a natural progression.

So we stayed in the jam room for a year and wrote songs complicated enough that the only way to learn them was drilling them over and over for hours. My own lyrics got more abstract as I’d use made up words, vocal imitations of Alex’s electronics and plenty of stream of consciousness & cut up. During this time we wrote and rehearsed the material for Ma vie banale avant-garde.

Then, exactly a year letter we took in on the road and to Dub Narcotic studio in Olympia to record. It was to see that the setting had radically changed in the year we were woodsheding. For one, many of our peer bands had either disbanded, or stopped/seriously slowed down on touring. “I’m in debt and can’t afford the time off work anymore” they’d tell us, or “I want to start a family / go to grad school / get an adult job”. “I can’t face another empty room, it’s futile, pointless, ridiculous, demoralizing”. Same story everywhere and no surprise, we were getting older and so were our friends and what’s marginal at 20-something becomes much more so at 30-something or 40-something. But beyond many of our cohort moving on, there where significant changes in what was deemed “underground”, what could get booked where and under what circumstances. It seemed that as a bunch of 30 somethings in an extended van full of big amps and a loud as hell P.A. had become an anachronism.

All of the sudden bands doing ads for soft drink companies or department stores were considered “underground”. So where did this leave the actual underground, the one that couldn’t sell cars/soda/computers even if if wanted to? Because it was weird/ugly/dangerous/challenging? It left it in a cave.

In many smaller centers, our friends moved to the bigger cities, and we’d arrive in a college town where our previous crew had moved to Chicago/LA/Brooklyn/ect, each night was like starting from scratch.

But being the scrappers that we are, we got home and chalked it all up to bad luck / bad timing and got on mixing MVBAG, feeling chipper and more certain than ever about what we were doing creatively. Then the requirements for US touring visas changed. All of the sudden the price doubled & we needed signed contracts from every promoter 3 months before petitioning for the visa. As one might imagine, getting contracts from DIY promoters 6 months before a gig is as easy as teaching your cats how to play the drums.

So the expenses are going up, the paper work is going wayyy up, the audiences are going way down and most of the bands we liked, if they weren’t packing it in, where seriously scaling back. The whole thing started feeling like more trouble than it was worth but we were so confident in our record that we went ahead despite any lingering doubts. We felt on top of our game, stoked to share our tirelessly worked songs, rehearsed to precision, with our peers. Then the actual tour happened, where by the time we had played to less than 5 people several gigs in a row, being a scroungy jammer seemed less like a fun hobby / challenging art practice and more like an exercise in humiliation. At at least half the gigs, the opening bands would split right after playing, without even acknowledging our presence. In New Orleans, attempts to chat with one of the opening bands got us eye rolls.

Myself, I had been contemplating returning to school for awhile at this point but there would always be a tour on the horizon. While my cohorts in the art scene were doing MFAs and getting gallery representation, I was playing a warehouse in the Midwest, a piss flooded communist squat in the Alps or someone’s living room in Texas.

As the front woman I was also getting pretty sick of the unending stream of misogynistic comments I’d face at our gigs, online or in the rare press coverage we’d get. Even more sick when I was told I should feel *good* about strange men verbally dissecting my body.

As someone who considered music making as part of an artistic practice, I was getting more and more disillusioned with the underground rock circuit. A lot of the time DIY shows was as shitty than the bar shows. Providing the background tunes for a party was not why I was putting this amount of effort/sacrifice into a project.Is a better context for underground experimental music too much to ask for?

So now Alex is not living in Montreal, I’m going back to school to be a 34 year old undergrad and we are still paying rent on a jam space to store our gear.

The vibrant scene we were part of seems to barely exist and it turns out that no one is actually interested in an hour long record of very formal harsh jams.

So we are playing our last 3 gigs in May. Not because we no longer get along, cause we do, and not because we aren’t happy with the actual music making, because we are. It’s simply not sustainable to be in this type of project for us anymore. 9 years is a long time to invest all of yourself in something that gets next to no feedback. It feels like the death of a loved one and we have to bury the body to keep the maggots away.

The only reason I even though to announce the breakup and not just do it quietly so our friends who live near by can come up to celebrate/commiserate with us, I posted it on our Facebook page. And then the blogs and magazines got up on it. It’s hard not to feel cynical when publications wouldn’t wouldn’t waste an article or review on us before are reporting on the breakup.

I posted on my twitter feed that I was crying for an end of an era as much as I was mourning the end of my band. But it’s not just that.In a sense it’s the end of myself. I’ve been in bands since I was 17 and I’m now 34. My self image is that of a jammer. A scroungy jammer. If I don’t have a band and don’t play shows am I still a jammer? If not a jammer than where do i fit in?

I’m not sure yet if this is the end of me making music or just the beginning of a long break but if it’s the latter I hope I can come back to it with ideas on how to create a new context for underground experimental music. A context that doesn’t revolve around youth culture or selling drinks (or anything else for that matter) or “entertainment” but one similar that that of performance art or that of musique actuelle.

All that said, I regret nothing. I stand behind everything we put out and despite the difficulties, frustrations and financial hits, it’s been 100% worthwhile. I’m proud of what we’ve done and glad as well as humbled to have gotten to play/work with the people and bands that we have. I don’t know I’d recommend this path to anyone else or if it’s even relevant to younger folks but I’m glad for the experiences because even the terrible ones become funny in time.

PrevPreviousStream live sets from the first night of the Austin Imposition
NextPandercakes, “Paint By Numbers”Next