Why It's Hard to Go See a Band You Really Love 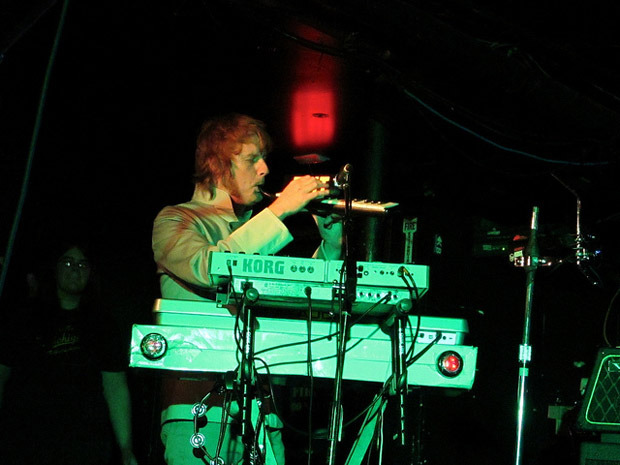 I never saw Olivia Tremor Control, and not because I didn't have the opportunity. Well, I didn't have the opportunity for a very long time, from when I first bought Dusk at Cubist Castle in 2003 until last year, when the band reunited after a long hiatus where founding member Bill Doss slipped into a drug funk and then re-emerged. They played a bunch of festivals, and a few standalone gigs in New York City, where I could have gone to see them fairly easily. But even though Olivia Tremor Control were one of my favorite bands in the world, I never went to see them. I did this on purpose.

Doss, who helped encapsulate the angst of the Southern psychedelic warrior by founding the Elephant 6 label in Athens, was 43 when he died today. He founded Olivia Tremor Control with Will Cullen Hart and Jeff Mangum, who left the band to be in Neutral Milk Hotel. One song where Doss and Mangum were still together, entitled “Fireplace”, was released on an EP called California Demise in 1992, and then on the Presents: Singles and Beyond collection, which is where I purchased it when I was 18. Here it is. Please listen to it now.

This is my favorite song of all time. I have never heard a song, in all the songs I have ever heard, that I love more than this one. I have played it for every date. I played it for every friend. There was a time when you could not even enter the door of my apartment without being asked if you had heard this song. I spent many evenings, over a span of years, listening to only this song repeatedly. When I was high. When I was not high. When I was sad. When I was happy. When I was in a car. When I was walking around with my first iPod. This song is the most important song ever written if your name is Ari Spool. I am listening to it right now. I listened to it thirteen times today already.

And yet, I never wanted to see Olivia Tremor Control. The thought didn't even enter my mind, that I would want to go see this band play live.

I want to see Bill Doss smiling in an empty field, sitting under the one tree which sprawls over him, dressed in paisley. I want to see Bill Doss eating Chinese in an over-decorated kitsch palace, laughing as he deconstructs a piece of egg foo young. I want to see Bill Doss with a group of children, holding a ball above his head that they can't reach. But I don't want to see him play music because there is no possible way that any live performance of any Olivia Tremor Control song can match the loaded emotional weight I have given it in my head. Every song, not just “Fireplace”, has been used and re-used to suit my mood cycles, during both the depressive lows and enthusiastic highs. I have assigned this music meaning beyond its own physical capability.

I'd like to think Bill Doss would like to hear me say this. I think he would be happy that I felt his music to such an extreme that it padded every emotional corner of my own personal insane asylum, that I loved it more than any other music in the world when what I needed most was to love music. I kind of wish I could have told him, in person, but that probably would have required that I go see his band.