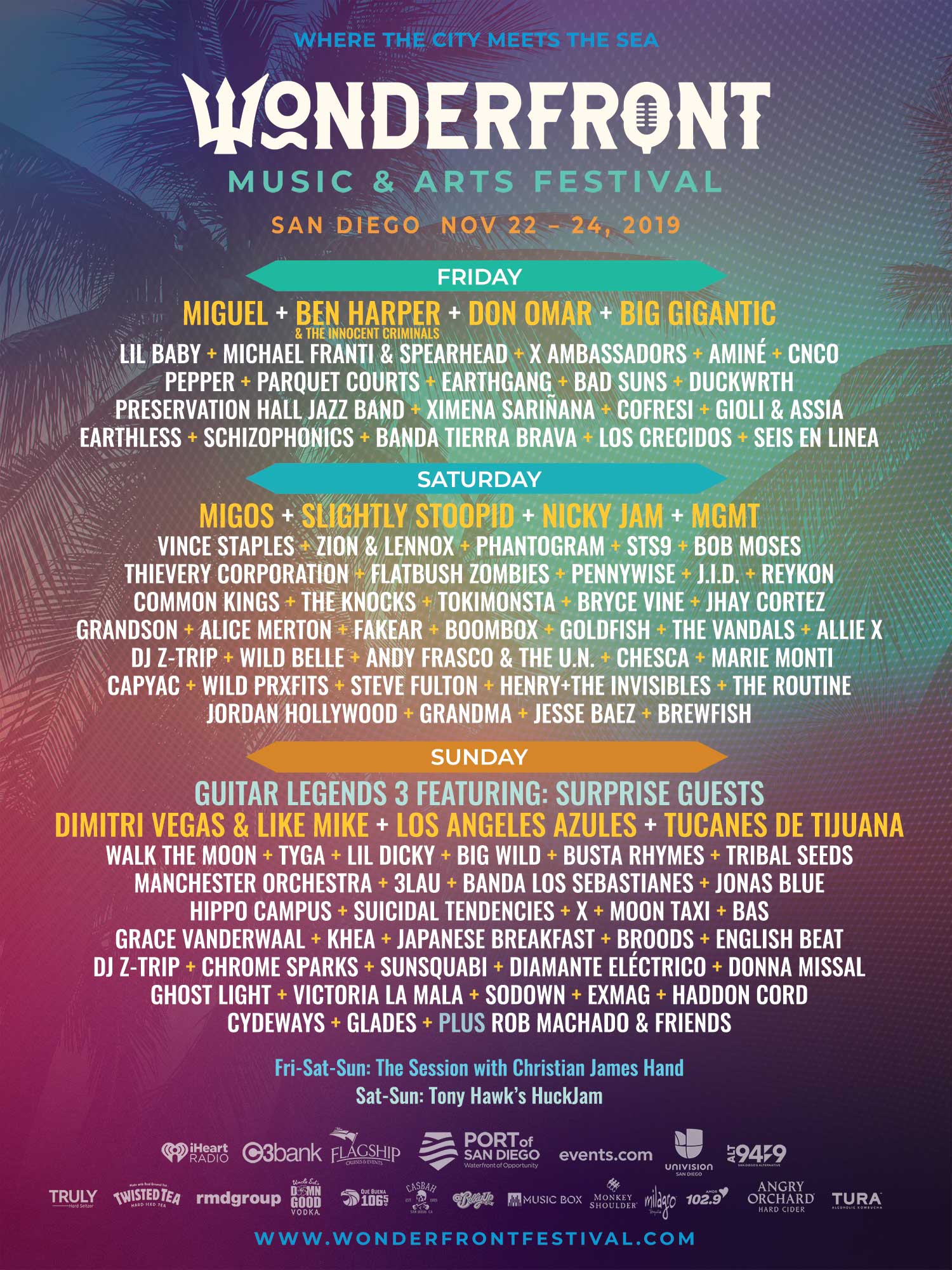 The day-by-day lineup has been unveiled for the inaugural Wonderfront Music & Arts Festival, which is set to take place November 22-24 at Waterfront Park in downtown San Diego.

Friday is top lined by R&B superstar Miguel and alt-rock vet Ben Harper & the Innocent Criminals. With one Grammy and three top 10 albums in his discography, Miguel is one of the most popular and acclaimed R&B artists of his generation, in addition to being widely regarded as one of the best live performers. Meanwhile, Harper is an eclectic bluesman and jam band artist who’s dabbled in a wide spectrum of sonic styles including funk, soul, and reggae. Both acts will surely kick off the festivities in style.

Saturday features a much deeper bill, with chart-topping rap group Migos and San Diego icons Slightly Stoopid headlining. Migos, the trio from Lawrenceville, Georgia comprised of MCs Quavo, Offset and Takeoff, have notched back-to-back number one albums (Culture and Culture II) as well as a slew of number one singles. Their forthcoming album Culture III arrives early next year. So far their presence on the bill had been kept under wraps; their performance at Wonderfront promises to be an incendiary one. Also performing on Saturday is reggae-rock band Slightly Stoopid, who at this point are a local institution. A big show on home turf will definitely be worthwhile.

And finally, Belgian EDM duo Dimitri Vegas & Like Mike will headline the fest’s final day along with a pair of legendary Mexican bands: cumbia collective Los Ángeles Azures and norteño group Los Tucanes de Tijuana. Dimitri Vegas & Like Mike are one of the hottest acts in the electronic music world at the moment, and are currently the reigning #1 artist on DJ Mag’s Top 100 DJs List. On the other end of the sonic spectrum, Los Ángeles Azules originally formed in 1983, while Los Tucanes de Tijuana have been kicking around since 1987. Both bands have nearly 30 albums of material to their names, and are considered to be two of the most important acts in the history of Mexican music. To have both groups performing on the same night is an absolute treat.

Other attractions include Tony Hawk’s Huck Jam on Saturday and Sunday. Wonderfront looks to be an eclectic blend of rap, pop, rock, reggae, and electro, with a heavy dose of laid-back SoCal vibes.

Three-day General Admission and VIP passes are available now. To purchase tickets and for other info, click HERE. And check out the rest of the lineup poster above.