Luke Scott is a racist 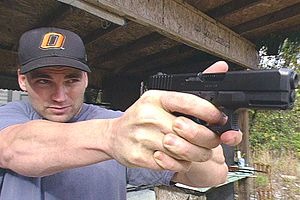 While I would like to sit here and point out the hypocrisy in the words of Baltimore Orioles' outfielder Luke Scott, it's much easier to call him what he is.

In a very recent interview with David Brown of Yahoo's Big League Stew, conversation of Luke Scott's recent hunting expeditions and his adoration of Ted Nugent turned to gun control.

“First of all, the reason the Second Amendment
was put into place was to keep the government from controlling the
people.”

“History will tell you everything. Just look at anywhere else in
the world. Look at Russia, look at Eastern Europe, look at South
America. Gun control means control. It means control for the government
and the government starts controlling the people.”

Here's where I would like to interject and point out the fundamental difference between right wing and left wing ideals. While I agree with Scott on his overall point, unlike him, I don't fear the government. I am keeping my guns for the giant corporations the GOP is selling our country to. I find them much scarier. Still, after making a somewhat educated statement, the slight, racist overtones start to creep in.

“The law is made for law-abiding citizens. The guy who you don't have to
worry about robbing you, the guy who pays his taxes, the guy who has a
job, the guy who's not interested in hurting people. He's not the
rapist, he's not the killer. He's the one who's going to follow the law.
Now, the law can say you can't have a gun, but the thug, gangster,
rapist and criminal — the thief — they're not going to obey the law
anyway. It doesn't even apply.”

Like I said, they're overtones. Scott only hints at the fact that poor and unemployed communities — who are subject to lower funding for education, healthcare and social services — have a higher crime rate, without explicitly saying they're primarily minority neighborhoods. Well played ol' chap. I can almost hear your agent and coaches telling you now, “You might want to keep that idea to yourself.”

But without prodding, Scott ventures straight into the real issue: socialism and
communism, and how President Obama is leading us down this destructive path.

“Obama does not
represent America.”

Good start, this is going to get fun!

“Nor does he represent anything what our forefathers
stood for. This country is basically built on an attitude. It's a way of
life. It's not because you're born here. It's not that you're supposed
to take from those who have and give to those who haven't. That kills a
country. It killed Russia.”

Again, I'd like to interject and say I agree with Scott. Our forefathers definitely did not have a socialist government in mind when starting America. But someone should remind him what they ran away from: A country that took from the toiling workers and gave it to the wealthy elite, because after all, they're the “job providers.” Anyway, please go on. Russia's good, but the racist nuggets are in there, you just have to keep digging.

“Cuba, Venezuela. People are trying to escape these lands like a plague.”

“What would make a human being swim 90 miles in
shark-infested waters on a raft made of tires and planks? To leave their
culture, their family, their language, their way of life. Everything
they've ever known. What would make someone do that? You don't see
people in America doing that.”

Actually, as the economy dwindles for much of America, many citizens are looking to European countries with socialized healthcare, better education, more vacation time, and incidentally, many more freedoms than we currently enjoy. It's a good thing you play on one of the least diverse teams in the league, with only six Dominicans and Dutchman Rick VandenHurk currently on the roster. And I'm sure Rick has a much different view on socialist values. But you were saying?

“Obama, he
doesn't represent that. He represents, 'Hey, everyone. Give me votes and
I'll give you stuff.' And there's even people on TV who [are asked], 'Hey, who you voting for?'

SCORE! And there it is, the nail in any Republicans coffin, and the basic point of most southern-raised, white land owners: I don't want those black people taking my stuff!

But still, it's not blatant. It's nothing you can't walk away from. I can practically see Orioles brass shaking their head in disapproval, but there's nothing to suggest that this journeyman outfielder would be worthy of discussion on some indie culture website with a sports “blog.”

Then David Brown did what any good reporter would do while having this obviously unaware man on the ropes; ask THE question. “You don't think that Obama wasn't born in the United States, do you?”

“That's my belief. I
was born here. If someone accuses me of not being born here, I can go —
within 10 minutes — to my filing cabinet and I can pick up my real
birth certificate and I can go, 'See? Look! Here it is. Here it is.' The man has dodged everything. He dodges questions, he doesn't answer anything. And why? Because he's hiding something.

“You
know what? People who have bad intentions, people that are deceivers or
are not of honor and integrity — that's how they act. I've seen it in
every — it doesn't matter what level. It can be in politics, it can be
in business, it can be in sports, it can be in the construction field.
Doesn't matter. It's all the same attitude. It's the same thing.

“People
who tell the truth, they're very easy to … their actions prove it.
Something as simple providing a birth certificate. Come on. If you're
born here, there's plenty of documents. But you know what? There's no
documentation of him. No legal documentation of him. There's been lie
after lie after lie exposed, but people put it under the carpet. Hence,
the problem we have in this country.”

I just left that part as is, because there's really nothing left to say. To make matters even more amazing, Yahoo posted Obama's birth certificate directly below this tirade.

There were some more words about why our forefathers fought for our freedom. To which I would be inclined to tell Mr. Scott that my grandfather fought for this country to help pull it out of a cataclysmic depression caused by the greed and lawlessness of the banks, which was then repaired by the “socialist” New Deal. So when you talk about what our forefathers fought for, I'm sure as hell they didn't fight for a generation of corporate shill republicans to turn around the best economy in the world and hand us a steaming pile of mortgage, bank, and oil company debt.

But this isn't political, this is racial. And you just said about the only racist thing you can get away with and still be able to walk into a clubhouse filled with lots of people who look like Obama and some who maybe even swam “90 miles in
shark-infested waters on a raft made of tires and planks.”

Have fun playing baseball in 2011 Mr. Scott. You just made playing for the Baltimore Orioles even more uncomfortable, and that's no easy feat.

PrevPreviousThankful to be gambling: Week 12 NFL picks
NextI told you the Jets were lameNext