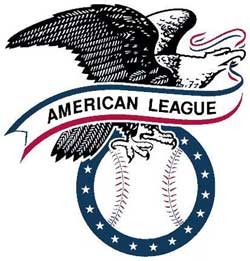 Ah, summer is finally upon us. At least for baseball fans. Who cares if they're playing games in the snow, it's fucking baseball season bitches! And with that comes the annual ritual of trying to predict who will win each division. We're starting with the junior league, known around these parts as the one where pitchers are too scared to hit and fat guys can continue their careers into their 40s being a DH (otherwise known as fake baseball). You might know it better as the American League. Here's how we see it all going down, which, based on our NCAA predictions, is almost certainly not how it will play out. We'll have the National League preview tomorrow.

1. New York Yankees
I don't really want to pick the Yankees to finish first, but I'm going to. In the early 2000s, I would've never made that pick because the Yankees represented greed and evil and the Red Sox were charming underdogs. The Red Sox don't really have that going for them any more though so I'm trying to stay objective. AJ Burnett is likely to bounce back at least a little bit from his sub-par 2010 so their pitching will be pretty solid. Offensively they are still stacked with Teixiera, A-Rod, Granderson, Jeter etc., but some of the guys in their line-up are getting pretty old. Take Jorge Posada for example. At some point he's gotta be finished, but to his credit, dude has looked the exact same for about a decade. For now, though, they are a reasonable bet assuming their pitching shows up.

2. Boston Red Sox
For the Red Sox to finish top this year they have to avoid the injuries that plagued them in 2010. Not to mention their pitching staff has to suck less than it did last year, especially John Lackey. As I write this, Lackey's ERA is 22.00 and he was also awful in the spring. It's not looking too great, but he has plenty of time to get it together. The Sox picked up potential MVP candidate Adrian Gonzalez in the off season and Carl Crawford is another new acquisition that'll add a lot to the lineup. One of Crawford's keys is his defensive range, but that will be largely wasted in left field at Fenway Park because it's so small. Oh well. He's still a good addition. The Red Sox look a lot better but they might not have enough, especially if anyone goes down with an injury.

3. Baltimore Orioles
If the season ended today, the Orioles would take the division. The season actually ends over 5 months from now though and usually by the time the fall comes around Baltimore is epically far off the pace set by New York and Boston. I think most people would pick Tampa here but the Rays are a shadow of their former selves, and Baltimore wheeled and dealed their way into a weird but decent looking line-up over the offseason. To do well they'll need efficiency from Vlad Guerrero and they'll need Derek Lee to be about 20% better than he actually is. They also need some pitchers to make the leap into semi-passable decency. Bummer part for O's fans is that even if they do well, the rebuilding process has a long way to go. It'll be awesome if they finally win the division some year, but with global warming and all they're going to have to get a move on if they want to do it before the world ends.

4. Tampa Bay Rays
Tampa Bay bought Johnny Damon and Manny Ramirez in the off-season, but the financial limitations of Major League Baseball prevented them from also buying the time machine that they need to travel backwards to when that would've been a good move. They lost Carl Crawford to Boston and Carlos Pena, Matt Garza, and Jason Bartlett all took off as well. They have a pretty good pitching rotation still so maybe they'll do better than the Orioles, but whatever.

5. Toronto Blue Jays
Vernon Wells' contract is hilarious. I don't know how he and his agent pulled it off, so the best thing Toronto has going for them this year is the fact that it's the Angels problem now. Maybe some young player will emerge as a real talent in this line-up but it seems like it'll be a few years until the Jays have anything going on.

1. Detroit Tigers
The Tigers have a lot going for them this season, and with the Twins on the (temporary) wane I think they could take the division. There are a few key variables at play, but none more important than the Cabrera Teetering on the Brink of the Sweet, Sweet Boozy Abyss Index (CTSSBAI), which is currently at +2. Their pitching situation is a little top heavy, but new additions Brad Penny and Joaquin Benoit will help fill out a rotation anchored by Justin Verlander and Max Scherzer. On offense they’ve added Victor Martinez and Jhonny Peralta, who is sort of a question mark, but the change of scenery might be good for him. And Brandon Inge at third base has great athleticism and range that’ll help pick up any slack Peralta leaves at SS. Austin Jackson had a great season last year and they can make a real run for the division even with Guillen and Zumaya perma-injured. Magglio Ordonez is pretty ancient at this point but I don’t think he’s crossed over into liability territory.

2. Minnesota Twins
The Twins will probably be the consensus favorite for the division, and they have the star power to justify it. Their problem is injuries. Joe Mauer is coming back from knee surgery and might not have the durability to do what the Twins need him to do (i.e. play all-star level baseball) all year. Morneau has lingering concussion issues that could very easily turn into a slow start or patchy play season long. Joe Nathan, the Twins closer, is coming back from Tommy John's surgery and is basically a question mark at best. In an alternate dimension, Francisco Liriano is one of the best pitchers around. Unfortunately for him that dimension is decades away from accidental discovery by scientists (we’re calling it here on Impose first) and he just doesn’t have the magic right now. Maybe he’ll get it back this season. Maybe he'll make a rom-com movie called “How Francisco Got His Groove Back”, complete with poor lighting and terrible dialogue.

3. Chicago White Sox
Ah, to be raised a fan of and live in the city containing one of the most detestable lineups I’ve ever seen in pro sports, made all the more so by their beady-eyed maniac of a manager. First thing I’ll say about the White Sox, if you’ve ever spent a night in Wrigleyville you know full-well that this team could be called the Ty Cobb Racist All Stars and it would still be more legit to be a fan than to cast your lot with that seething frat-boy nightmare horde known as Cubs fans. But just barely. The Sox are veterans which works for and against them. They’ll have staying power late in the season but they’re very susceptible to injury problems and they just don’t have the offense to go at it with the Twins and Tigers. The one shining diamond in this asbestos mine is Alexei Ramirez, who has insane power for being a stick figure drawing come to life. He’s not a complete enough player yet to make much of a difference though.

4. Cleveland Indians
Both the city of Cleveland and this team still exist. Neither is really very bad or very good. I went to Cleveland for the first time this past summer and it was pretty alright in a rust belt sort of way. As far as the baseball team is concerned: Orlando Cabrera is good, of course, and Travis Hafner is alright, but if I were an Indians fan I’d be worried that he’ll figure out he could make better money pretending to be Vin Diesel in Bollywood movies. I imagine they’ll restructure a bit once Sizemore’s contract is up, but for right now, I wouldn’t expect too much.

5. Kansas City Royals
The Royals are a lot like the sandy sea floor. They get stirred up and float around a little at first, but give it some time and they’ll inevitably settle straight back to the bottom. Without fail a few baseball insiders go for some “told-you-so” cred by saying the Royals will be good in the coming season but it never really happens. Someday, Royals fan(s?).

1. Oakland A's
Oakland's bullpen had a combined ERA of 2.94 last year, which is pretty nice, and they made some good trades in the off-season despite letting the semi-threatening Adrian Beltre fall into the hands of their Texas rivals. Hideki Matsui is in the line-up now as well as Coco Crisp, who had a good spring after playing only 75 games last season. I'd say it's a little sketchy as to whether or not those guys are going to provide too much, but the pitching is good and this division is pretty weak so I think it's probably enough.

2. Texas Rangers
The Rangers had a great season last year but they had a bad trip of an off-season. They whiffed on landing Cliff Lee, endured some front office problems, and totally alienated their DH, Michael Young, by forcing him to stay on the team. They have a good chance at taking the division if the A's can't hit and their line-up is definitely good, but their pitching might not be there. Plus George W. Bush always goes to their games. Fuck that shit.

3. Los Angeles Angels of Anaheim
I don't know why it has been such a big deal settling on what this team is officially called as far as the city or state that they are from, nor do I really want to find out because it is probably a long, boring story involving lots of stubborn millionaires and tax loopholes. They have a funny name and the same owners who eventually settled on that name also managed to take on one of the most disproportionately huge contracts in baseball history, which means they have to pay Vernon Wells $81 million dollars through 2014. Not that Wells is terrible or anything, he'll be a fine addition, but that contract is going to really hurt their ability to acquire new talent for a few years. They missed on pretty much every other trade they tried to make. Scott Kazimir should be their ace right now but just like the cast of Party of Five he peaked way too young and is now inexplicably adrift. If he pulls it together they might have something.

4. Seattle Mariners
This team is dysfunctional. Their star pitcher, Felix Hernandez won a Cy Young last year and pitched a 2.27 ERA over like 50,000 innings, but still went 13-12 because his team let him down so bad. Ichiro is still incredibly efficient as a hitter. Milton Bradley is a moody, underperforming disappointment and looks to continue down that path. Similar to the Jays in the East, there's some talent but it'll probably be a little while. This division is hard to predict, so maybe they'll climb out of the basement.