20 years ago today I had the worst birthday ever 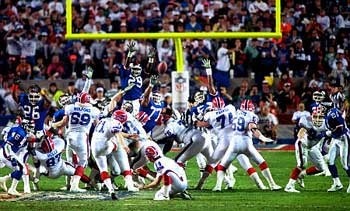 The two words that live in infamy in my lexicon next to “No Goal.” It wasn't supposed to happen. The Bills were coming off a 51-3 thrashing of Bo Jackson's Oakland Raiders in the Championship game, and were the most favored AFC team in Super Bowl history.

I remember the night well, hanging out with my friends. I was still young, barely in my teens, so the game was far less important than the girl I would make out with for three quarters. Besides, the Bills couldn't lose: We practically invented the no-huddle offense, the roster was filled with would-be (and now are) hall of famers, and we just didn't lose. For those too young to remember, the Bills at that time were like the Patriots of today with Peyton Manning at QB.

And reason number one, it was my birthday. Surely if God existed, he wouldn't let the Bills lose to an inferior team from New Jersey on my birthday.

Most of you should know how it ended. Even non-sports fans know how it ended. Just watch Ace Ventura if you're clueless, and if you must, you can see how it went down here. All I remember is the room falling silent when they lined up for the kick. All of us middle-schoolers holding hands with baited breath to celebrate the inevitable win. It was destiny, it was our time, it was… wide right. Someone screamed. My heart sank. There was always next year we thought. How right we would be.

That moment scarred my memory and started a domino effect of defining moments in my life. Of course, Buffalo has still yet to win a championship. My feelings on God, well, let's just say he clearly doesn't care about human beings nearly as much as we'd like to believe. And this chip. This giant chip on my shoulder I carry towards anyone whose team has won a championship in their lifetime. It hasn't gone away. Although, my feelings towards the Giants have softened since they beat the Patriots in 2008 (incidentally, also the most favored Super Bowl team at the time).

Maybe it's a good thing. Maybe it's what keeps me driven. That's what I try to tell myself. It definitely puts things in perspective. It's just sports. At least I'm not Scott Norwood. And even with the Bills losing in dramatic fashion, I still got to make out with a girl for 75% of the night. You have to like those odds.