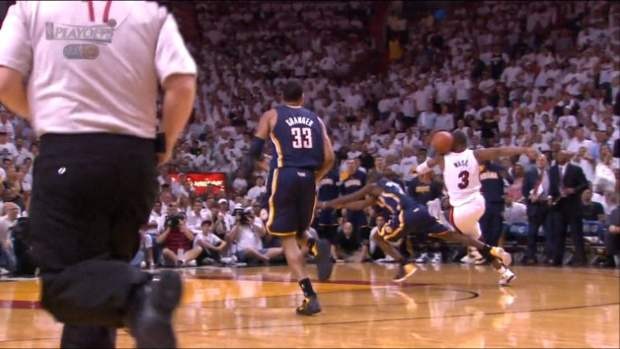 I’ll introduce this by saying I am Indiana by more than birth, and when the Pacers play like they did against the Heat in game three I can somehow forget about our fractured public education system, our capital city’s lack of public transportation, and the cracker jack houses that are eating up our farmland.

What I'm here to discuss right now, though, isn’t the complete domination the Pacers put on last night – for, ever the Midwestern pessimist, let's will assume the Heat aren’t going to roll over – but the hard foul Dwyane Wade gave Darren Collison in game two.

It’s a tired subject, perhaps, with shitty websites like the Bleacher Report praising the play and the NBA for not upgrading it from an inconsequential Flagrant 1 to a Flagrant 2. Truth, as a fan, I applaud the aggressive play of yore, but Wade is kind of a bitch.Growing up I had a Larry Bird poster wherein he was flying horizontal six inches above the ground trying to grab a loose ball. The accompanied quote from Bird read, “It makes me sick when I see a guy just watch the ball go out of bounds.” Wade is a physical presence and can shoot the ball, but his poster would only show him raising his arms in protest and mean-mugging Joey Crawford. The quote, obviously, “It makes me sick when I see a ref not give me the call I want.”

I’ll allow that the NBA has designed basic rules of play – 3 second violations, traveling, illegal screens – in a way that limits subjective calls. Whether they enforce these kind of rules that’s something else, with the argument switching sides and gaining or losing fervor depending upon how your team fared the night before. The more subjective element comes in when the officials must make distinctions between the levels of Flagrant fouls and Technicals. As mentioned, Wade was whistled for a Flagrant 1 when he lowered his shoulder and forced Collison to the ground. Both levels of Flagrants involve unnecessary contact and most often include a wind-up, contact, and follow through from the offending player. The main distinction between a level 1 Flagrant and level 2, according to the NBA rulebook, is that level 2 includes unnecessary and excessive contact. And, as most are aware, the penalty is much harsher for a level 2 Flagrant: immediate removal from the court and possible suspension. To help determine which category the foul falls under, officials will look at the severity of contact, whether the player was making a legitimate basketball play, potential for injury, and the outcome of contact (whether it led to an altercation).

This is all quite cute, but still allows for a lot of variation in the treatment of fouls. Depending on which team you’re pulling for, Wade maliciously leveled Collison and the NBA is blatantly putting its star preferential treatment on display or Collison widened his path and Wade has nothing else to do but bowl him over. It's a quick exchange, and even though once a foul is labeled as Flagrant the refs have the ability to look at the instant replay, a 'wind-up' and 'follow-through' aren't wholly determinable. That players from neither side engaged each other after the foul also limits the perceived severity, though that should not influence the front office when the look at the tape the following day.

Youtube lit up in the past day with clips comparing Wade’s foul against Jason Smith’s leveling of Blake Griffin. Smith, one of the however many NBA players destined for obscurity, was assessed a Flagrant 2 and suspended for two days. Conspiracy theorists are busting themselves as they watch similar fouls with very different responses from Stu Jackson’s office.The Wade/Collison interaction was in the playoffs, though, while the Smith/Griffin was in the regular season and wouldn't have any effect on the end of the season. One can argue whether or not that matters – a foul is a foul – but it did feel good to watch Wade turf out at a historical level during a game most Pacer faithfuls thought he should've been suspended.

In pursuit of making sense of the call, we can check NBA.com for an in-depth video breakdown of what constitutes various fouls, with 18 videos attempting to demystify the differences between a Flagrant 1 and 2. I watched these damn videos for an hour straight, and in the way repeating a word aloud for several minutes renders the word to an unintelligible sound, I can no longer tell the difference – not that the difference between the Flagrants was obvious from the beginning. An interesting note, is the harsher rulings seem dependent upon more than simply the contact. How did the fouled player land; did he remain on the ground; was there jawing from both sides? These, however, remove the weight from the offending party and put slight responsibility on the fouled player. To make a foul harsher, the player must sell his fall – something fans all aware of, but is also seen as a detraction from the game.

Immediately after the foul, Collison got up and received multiple 'pep-talks' from his teammates. Wade walked around and chewed his gum. Nobody skirmished.

We understand our judicial system to use precedents to help guide them through future rulings, and perhaps we are quick to assume most American entities do the same. If Smith's foul was a Flagrant 2 and resulted in a 2-game suspension, should we not refer to that interaction when breaking down the Wade-Collison foul? Sure, but we'll also have to keep in mind fouls like Kenyon Martin's on Dirk Nowitkzi in the 2009 playoffs. K-Mart shoved Dirk out of bounds while not making a basketball play and was only given a Flagrant 1 foul – though he was fined $25,000.

The trouble most people seem to be having with the NBA – aside from Wade's entitled and juvenile playing style – is the lack of communication from the front office. Now, sure the NBA is a company and what responsibility do they have to inform the general public of all their dealings? But a little clarity would go a long way. On average, most people aren't too upset with hard fouls. We are America; bigger, faster, stronger. We are also, though, riding that 99% tip and in a time where we're constantly being reminded that most of us are the “Have-nots,” we don't want to think that there's some sort of Matthew Effect spinoff in our beloved game of basketball.

The Pacer fan in me is calling for Wade's head, but the inconsistencies from Stu Jackson allow me to understand how Wade's foul might not be upgraded. On the NBA site, you can watch Troy Murphy take down a Spurs player as an example of a Flagrant 1 and then J.R. Smith take down David West in a very similar fashion as an example of a Flagrant 2. There seems to be nothing to do but concede that the distinctions between the two types of fouls are somehow hyper-nuanced and only a great mind like Stu Jackson can determine what is truly going on. If Jackson and David Stern have intentions on helping us forget that what they are pushing is indeed a product, it would do them good to give their fans the occasional explanation for their rulings. Otherwise, us small market guys have nothing to do but whine about star treatment and drum up conspiracy theories of fixed games and championship groomings.