Week in Sports: “Why don’t you leave this to the boys, sweetcakes.” 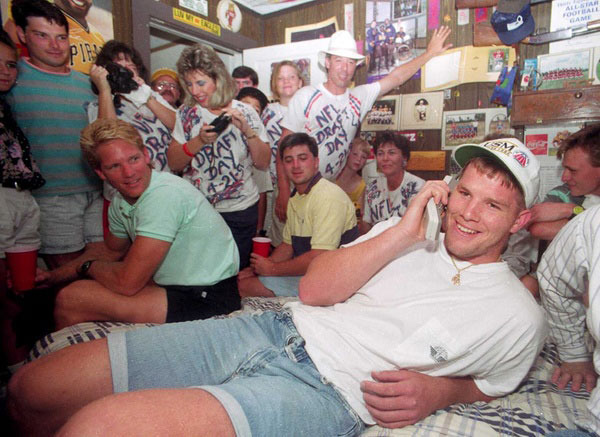 Holy crap isn't just what happens from eating too much on Christmas Eve.

It's also a term to describe a lot of shit that went down, like this week in the wild, wacky world of competitive sports. So we'll get right to it.

“Why don’t you leave this to the boys, sweetcakes.”
Sometimes you have to wonder if calling all those non-consequential bowl games makes you care less about losing your job. Either way, the Chik-fil-A Bowl last Friday was filled with enough misogyny to last until next football season. Longtime ESPN announcer Ron Franklin was part of a production meeting before the game with sideline correspondent Jeannine Edwards and announcers Ed Cunningham and Rod Gilmore. During the meeting, the subject of Gilmore’s wife Marie being elected Alameda (CA) mayor came up.

As Gilmore, Cunningham and Franklin discussed the subject, Edwards tried to join the conversation, causing Franklin to reply, “Why don't you leave this to the boys, sweetcakes.” To which Edwards fired back, “Don't call me sweetcakes, I don't like being talked to like that.”

Being the stand-up guy that Franklin is, he took it back. “Okay then, asshole”

Of course Franklin has been suspended. Both from ESPN and in time, since the tiring old sportscaster must think he's chilling in the 1950s. For the record, Impose is your only sports source with the balls to type out the word “asshole.”

TCU is your National Champion
We won't let an old man's sexism keep us from the excitement of Bowl week. Well, at least the TCU-Wisconsin game, which is one of the few games we could find reason to talk about before next week's national championship game. The Horned Frogs gave us yet another reason to believe in anything besides computer rankings by becoming the first small school to win the Rose Bowl. Despite beating a Big 10 team and finishing a perfect 13-0, we're still gonna have to listen to old rich dudes from the big conferences tell us why they shouldn't be in discussion for the national championship. And we're supposed to believe it has nothing to do with money.

Until then, the only excitement in the current bowl set-up is when the refs make a horrible call to ruin the only game that was fun to watch.

And the first pick goes to…
Besides the bowls and NFL playoffs, this time of year is marked with chatter of early draft predictions, with the top of the pecking order decided as the season winds to a close. The Carolina Panthers will draft first and more than likely admit their 2010 draft was an apocalyptical failure by taking Stanford QB Andrew Luck. While Luck is regarded as the best talent in the draft, Carolina used two picks last year — including their second round pick for Jimmy Clausen — on QBs, and picking Luck might open the door to speculation that their GM doesn't know what the hell he's doing. That said, Luck hasn't even announced if he will leave school early to enter the draft, so this could all be a moot point. My Bills pick third, their highest draft pick since choosing Bruce Smith first overall in the 1985 draft. SBNation posted their mock draft, but I think they're wrong. Cam Newton baby!

Speaking of the draft, did you know that Arian Foster entered the NFL undrafted and ended the 2010 season as the league's leading rusher?

To the loser goes the spoils
The big news coming out of the NFL this week was the finalization of the Playoff schedule, with Seattle's riveting 16-6 victory over the St. Louis Rams making the Seahawks the first NFL team under .500 to make the playoffs. Even that wasn't low enough for this game however, as some are suggesting the refs gift-wrapped a first down to help secure the win.

Outside looking in
Making the playoffs as a 7-9 team is like rubbing salt in the wounds of the NY Giants and Tampa Bay Buccaneers, who each won 10 games and are left on the outside looking in. Then again, that's much better than being on the outside of the entire league looking in, like the Mangina is today in Cleveland. But even someone with as little respect as I have for Eric Mangini wouldn't high-five my friends over his firing.

Oh yeah, and one last NFL point: Tucker Carlson should shut the fuck up.

From football to futball…

Villa Thrilla
On Sunday, Chelsea drew 3-3 with Aston Villa in what was probably
the game of the season so far. If you like your highlight videos grainy
and incredibly slow-loading, click here
for a link to a bootleg one on what appears to be the Russian version
of YouTube. Definitely worth a watch unless you were somehow awake and
at a soccer bar at 7:30AM and got to see all the mind bending drama
unfold live. Chelsea is now out of the top 4 (meaning no Champions
League, if the season were over today) and having their worst run of
form in a long-ass time. John Terry's return from injury doesn't appear
to be the miracle cure-all that Blues fans were hoping for. –JW

…And the Rest
The player of the moment right now is Samir Nasri, who scored once and set up another in Arsenal's 3-0 drubbing of Birmingham City, who are usually called Brum in the British press for some reason having to do with their accents
or something. Manchester United stayed top (yawn) with a game in hand
by beating West Brom, who could've taken a 64th minute lead save for a
missed penalty. Manchester City is second after squeaking past the
remarkably competent scrubs that are Blackpool. Tottenham also won, and
Sunderland continues to look strong
after beating Rovers 3-0. Liverpool temporarily staved off the chaos
that surely awaits if their coach gets fired by beating Bolton Wanderers
2-1. –JW

From across the pond to skating on it…

If a hockey game is played and no one hears it
The biggest hockey game of the year was played on January first, and surprisingly not many Americans seemed to care. No, that's not sarcasm. The game featured the two best players in the world playing outdoors in front of 70,000 people, yet for some reason the hoopla that normally surrounds the NHL's Winter Classic game was noticeably absent. Maybe it's because it was played in the rain. Maybe it's because it was moved back to 8PM on a Saturday night, or maybe it's because the NHL should stop pandering to Americans who don't understand this is the most exciting sport to watch and just play it in Canada where people would actually appreciate it. They can't all be as great as the first one.

Less is more
The NBA was surprisingly quiet this week, but the Celtics might think otherwise. The excitement of finally getting Rajon Rondo back was suppressed by the loss of both Kevin Garnett and Paul Pierce to lower leg injuries. And did we mention Rondo's sprained ankle was acting up? Luckily Garnett will only miss two weeks with a calf strain and Pierce won't miss any action. Still, got to wonder if this team is just too old, or if highly underrated Doc Rivers (seriously, he deserves mention among the NBA coaching elite) is beginning the Celt's annual mid-season IR rests.

Kobe Bryant might also argue against the notion that this week was quiet, at least the week's end. After losing woefully to Pau Gasol's brother Mark's Grizzlies — the Lakers third loss by 15 or more points in their last four home games — good ol' Phil Jackson brought the hammer down on Bryant. Is it just me, or is Phil getting crankier in his old age?

Maybe it's because his dad's head looks like an alien
On the sad side of the basketball arena, perennial all-star and current Atlanta Hawks exec Nick Van Exel's 20-year-old son Nickey was arrested for capital murder when he reportedly confessed to killing his good friend Bradley Bassey Eyo. Van Exel's attorney is calling the matter an accidental shooting, but the Dallas Morning News is reporting that Van Exel shot his
neighbor with a shotgun in the middle of the night before dumping the body in a nearby lake.

At about 1 a.m. Sunday, Eyo went across the street to visit
Van Exel at his home in the 6900 block of George Brown Drive in Garland.
Documents say that Van Exel aimed his parents' shotgun at his friend's
chest and fired.

Van Exel wrapped Eyo's body, dragged it downstairs into the garage and
loaded it in the back of a 2001 Chevy SUV, detectives wrote in an arrest
affidavit.
About 8:30 that same morning, a man called police to report a body near
the park on Barnes Bridge Road in Dallas. The affidavit stated that
Eyo's body was missing a pair of Nike Air Jordan shoes, two cellphones
and jewelry.

We don't want to speculate, but we suspect one of three things came between the younger Van Exel and his neighborhood friend: Money, women or drugs. Nor do we want to make light of the subject, but this is a story to watch. It has Lifetime movie written all over it.

The Orioles are in the news! Oh, wait…
Murder doesn't just reside in the NBA this week. Baltimore Orioles reliever Alfredo Simon surrendered to police in the Dominican Republic to face involuntary manslaughter charges in a fatal shooting on New Year's Eve. Simon reportedly shot and killed 25-year-old Michel Castillo Almonte
and wounded his 17-year-old brother. Simon's lawyer said he was firing
celebratory shots in the air. Though prosecutors suggest the shots were fired less jubilantly.

“The version that we have is that there was a dispute between two women
and he tried to dissolve it, fired a shot that ended up wounding a young
person in the arm and that same bullet lodged in the chest of the
deceased.”

To make matters weirder, Simon turned himself in via the advice of Orioles free agent second basemen Julio Lugo, who apparently accompanied Simon to the police station. Simon's lawyers want us to believe this celebratory shooting defied physics more than the infamous JFK magic bullet. Still, we're marking our calendars this January 3, 2011: A day we actually talked about the Orioles.

Sportsmanship is also dead
And lastly, because we hate ending on sour notes, we'll pay homage to the dead while giving everyone on this side of the Pacific reason to believe that a lack of sportsmanship is really awesome to watch. This is Pearland Texas High School using the “Dead Man” trick play to pull off a 28-24 upset over No. 5 nationally ranked Euless Trinity High (also of Texas) in the Class 5A Division I state championship. Bout it bout it.