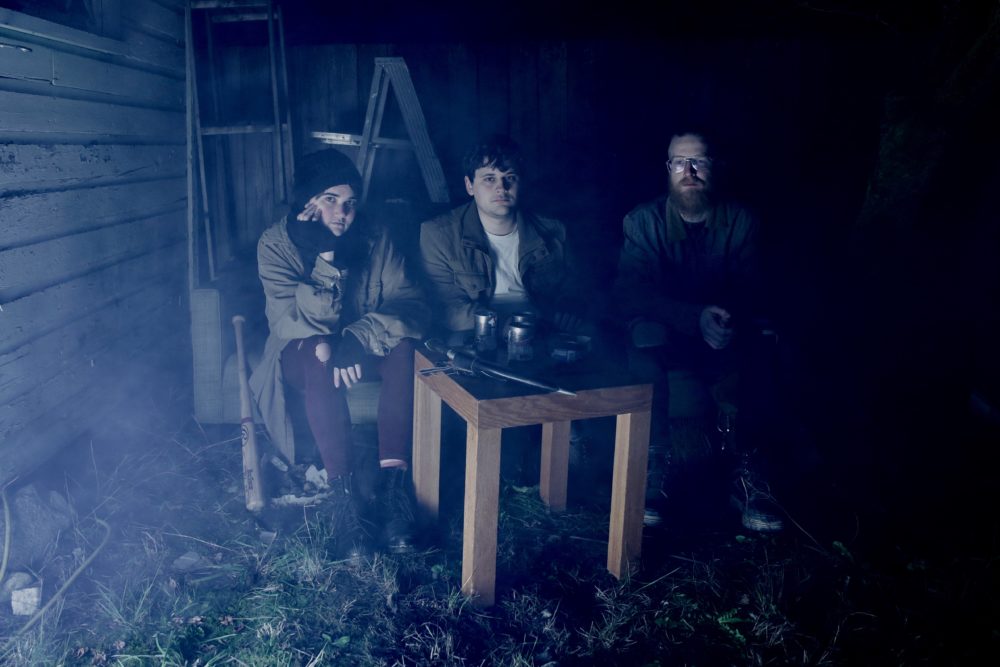 Seattle-based rockers Scarves recorded their new album, Dinner Dates for the End of Days, “under a cloud of smoke and ash from British Columbia forest fires.” That apocalyptic backdrop offers room for the band to experiment with all things math-rock/emo/art-pop in a wonderfully unique way.

The LP is out today and to celebrate, we had Scarves break it down for us track by track. Check it all out below and order your copy of Dinner Dates for the End of Days on vinyl here.

When I was in high school I lived next to this kid who was just a giant. His name was Bolar and he was such a strange figure in my life. He was this 7 foot tall Mongolian party animal who always tried to teach me words in his native tongue or explain to me why Depeche Mode were the greatest band in the world. He was also terrified of ghosts and always made me walk him home when it was dark out. A couple of years ago his heart burst and he passed on his sleep. This song is for him.

Seattle is a city under eternal construction, meaning most of the time the streets are flooded with construction workers. I think my image of them was always stuck on the old masculine man sitting on a girder, eating a sandwich out of a tin lunch box. That was until my brother got clean and became one, and then I started to really consider how arduous that job really is on a person. I remember the first few months he had the job, he would come home from work and just crash for hours in the middle of the day, wake up for dinner and then crash again. I thought about him a lot while writing this record.

It’s funny to me the Ouija boards are always depicted as a terrifying thing. I always thought the sentiment of wanting to commune with the dead was kind heartbreakingly sweet. This song is meant to capture that feeling of being up at two in the morning and truly believing that you are connected to someone who is gone, even though you won’t an hour or two later.

I love what our guitar player Nessa did compositionally on this track, and their vocals at the end still wreck me.

I think this song is our take on Nickelback’s “Rockstar.” I could say more on that, but I think it’s more interesting to let you know that “doo wop’ part was me trying to inject a little “Bob’s Burgers” flavor onto the record.

My mom thinks this song sounds like a on old Western movie and I love that. The band actually painstakingly resurrected this track from an abandoned demo we made for our second record, which was a pretty tedious process but I am really happy with how the instrumental turned out. Lyrically the track is just focused on how complicated and messy but gorgeous most relationships are. It is pretty pop punk, but to be fair I am pretty sure even after the world ends there will still be a speaker playing “Enema of the State” somewhere.

This song is about having one of those moments where you realize you are definitely not the same person you were a year or two ago. One of those sucker punch moments where you look in the mirror and realize that after years of trying you can finally grow a beard. The chorus on this song is one of my favorite moments on the record, and instrumentally maybe my favorite chorus we have as a band. I love how the bass and the bass drum groove while the guitars do a sloppy Television impression.

I have a friend named Alex Vigue who is one of the best poets I have ever met. Last year they put out this incredible collection on the the topic of masculinity called Myth of Man that wrecked me when I first read it. Their writing depicts it as brutal and beautiful in ways that floored me. The lyrics to this song are sort of a love note to that book.

My guitar riff came to me in a dream a week before recording. I took that to my band and they just crushed it and composed a full song in like 2 hours just based off of like 6 or so notes I showed them. Our drummer Cael really killed it when it came.

Finding a place to live in the northwest, and I assume any city in the shadow of the tech industry, is an terrifying thing. A while back a partner and I spent a couple of weeks couch-surfing up in Bellingham trying to find somewhere to land after college. I was anxious almost 24 hours a day, but there was also something really beautiful and imitate about being on that search with someone else. This song is about that beauty.

Also that slow down at the end is mad Pink Floyd, isn’t it?

One of my biggest influences is the Hold Steady. I admire how Finn has these complex narratives that let characters grow and interact through multiple records. The characters in this song were the main ones on our first concept record Empty Houses and I figured the end of the world was as good as a time as any to check in and say goodbye to them.

This song, and really the whole record, is about celebrating what’s worth living for even if the whole world is dying. It came together over slowly and is sort of a collection of three or four riffs that we tried to turn into stand alone songs but somehow magically fit together. The choral part at the end was written by Nessa and has made about half the people I have shown it to cry.