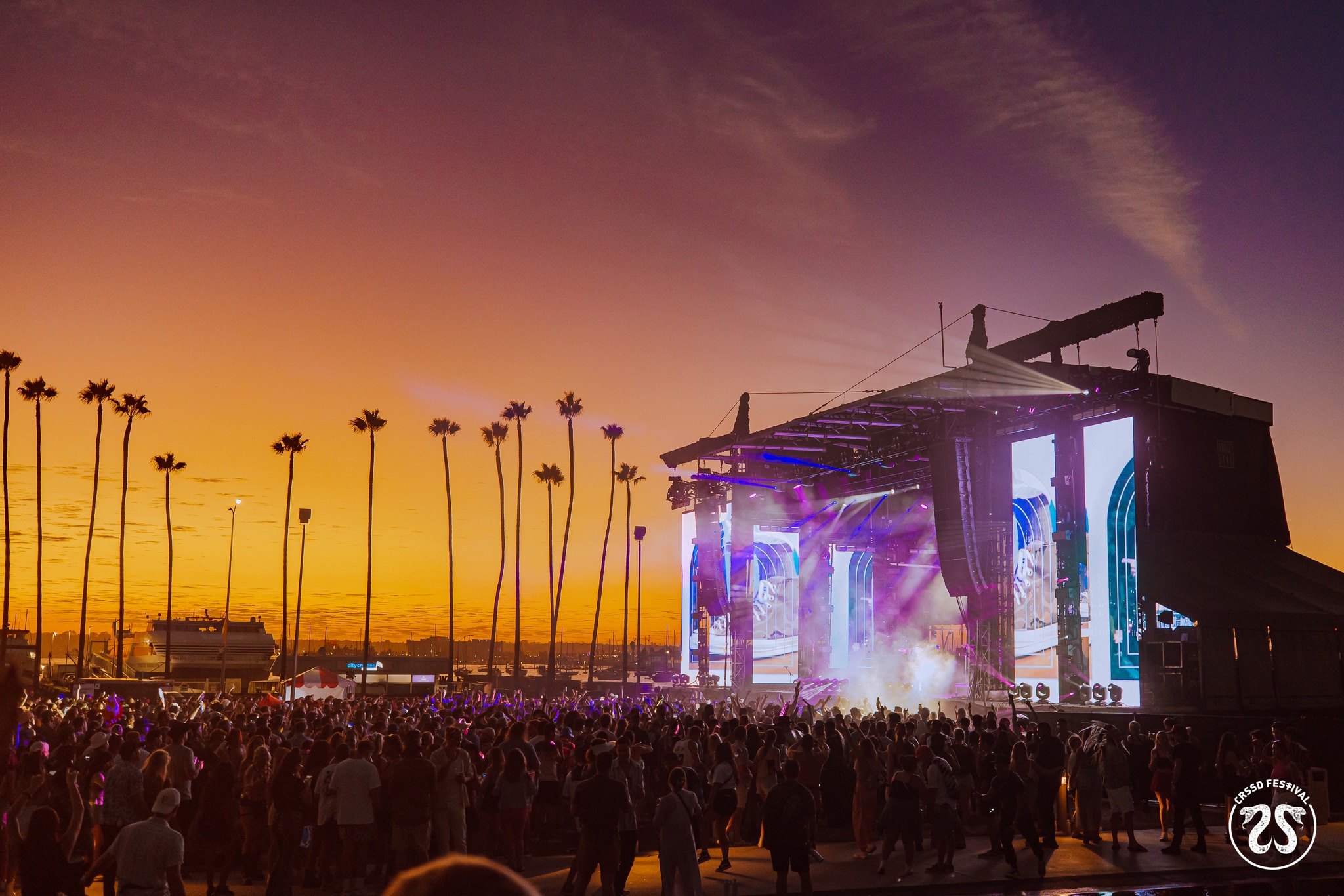 There really isn’t a better venue for an event like CRSSD than Waterfront Park. It’s the definition of picturesque, lying directly adjacent to the San Diego harbor, with the antique sailing ship Star Of India nestled in the background. There’s green grass and water fountains you can wade in as the sun disappears into the ocean and the sky turns to a bright pink hue. It’s the perfect place to soak in the vibes of some of the best electronic music the scene currently has to offer.

I’ve been a San Diego native for most of my life, so it’s practically a sin that I hadn’t attended CRSSD up until now. I’ve never been able to fully enjoy an entire day of straight EDM at festivals past – EDC, HARD Summer, etc. – but this latest edition of CRSSD had a lot more to offer beyond that.

Waterfront Park had truly transformed into an eclectic musical oasis, and each stage had its own unique set-up. The Palms and City Steps stages had shaded overhangs, which helped cool you down while dancing. City Steps and Ocean View ran adjacent to pools of water with gushing water fountains that you could dance, wade and splash in up to knee high. City Steps and Palms played host to DJs while Ocean View seemed to exclusively feature live acts. Amazing music, chill vibes, and great food and drinks abound (any festival that has Spicy Pie is a tier above).

The crowd was also incredibly mellow and one of the most diverse I’ve ever seen. I saw newly drinking age-legal adults and even some old school ravers, as well as one lady in her seventies who was dancing fervently with an umbrella all day at City Steps. CRSSD has cultivated an impressive audience demographic.

The first act I saw was the legendary English breakbeat duo Orbital. Though it was a bit strange to see them and their trippy visuals at 4 p.m., they still rocked the time slot for a modest but devout crowd. The brother duo Phil and Paul Hartnoll staved off the beating sun and brought ominous energy and improvisational stylings to the tables, invigorating their live set via a swirl of synths, drum machines and sample looping. They even busted out a jungle remix of Spice Girls’ “Wannabe” to the delight of everyone in the area.

The Avalanches have made their mark as one of the most fascinating and unique recording projects to ever exist, as evidenced by their legendary 2000 album Since I Left You. A lot has changed since then, but they’ve still maintained their mythic status in the plunderphonics sphere. It was a bit of a bummer to see them billed as a “DJ set,” however, the duo of Robbie Charter and Toni Di Blasi laid down an inch-perfect mix at the Palms stage, with adept song choices and smooth transitions you’d think were their bread-and-butter. Ultimately, the Avalanches have way too many tricks up their sleeve.

Caribou is one of my all-time favorite musicians, and Dan Snaith and company did a brilliant job of warming the crowd up during the golden hour. Of course, a good chunk of the crowd was there waiting to see Fred Again.., the golden boy of electronic music at the moment, but they wound up being very receptive to the searing, full-band IDM-pop that Snaith has become infamous for. Highlights of the set included Suddenly track “Never Come Back,” Swim hits “Odessa” and “Sun,” and especially the swooning set-closer and Our Love single, “Can’t Do Without You.” Caribou is simply one of the most reliable live electronic acts in the game.

In between Ocean View acts, I ventured over to the City Steps and caught the last half hour of “Papa” Sven Vath, the pioneering techno and trance veteran notorious for his vinyl deck set-up and titanically long sets (his longest set ever was 30 hours). He opted instead for a simple two-hour slot, and in that time he unleashed a cavalcade of synth-heavy new beat bangers full of epic transitions and drops. Sven has been doing this for nearly 40 years, and he’s on this day he was even impressing young zoomers in attendance. The cream really does rise to the crop.

Ever since his name popped up on the Coachella poster, and on top of all the buzz that set eventually generated, Fred Again.. has dominated the EDM discourse to the point where you’d assume he’s one of the scene’s biggest acts. The fact that he’s accrued so much buzz so quickly is a bit absurd, and here at CRSSD he was given the coveted main stage subheadlining slot. In the end, I had to for myself what all the hype was about. My answer: he is the real deal.

The crowd at Ocean View was by far the biggest I’d seen all day. His house-laced dance pop style is perfect festival music – melodic, anthemic, easily-digestable, but also in possession of an aura of incorrigible, forward-thinking cool. Fred’s voice is pure-sounding and pure of heart, and it galvanized the crowd to sing along loudly as his bandmate pummeled the drum machines with passion and fury. I will admit to Fred Again’s music not totally being my cup of tea, but there’s no doubt that he sold it well with this set. He is objectively good at what he does, and it will not surprise me one bit if he goes on to become the next mainstream electronic titan ala Flume or Porter Robinson.

I left a little early from Fred Again to beat the crowd and check out Rainier Zonnefeld, another highly buzzed young act in EDM. Techno was the name of the game for this guy, and he brought an edgy, heavy, futuristic spin on it to a swelling crowd. The beats he laid down at City Steps urged me to dance harder than I did all day, and while I’m not a huge techno aficionado, I absolutely will be checking him out again down the line. My guess is he starts blowing up very soon.

My night ended with a spectacular headlining set from Jamie xx, who has grown to be one of the go-to guys to anchor these smaller electronic music festivals. There’s something equally kinetic and melancholic about Jamie’s live mixes that stirs the emotions, and while the crowd was much smaller than Fred’s behemoth throng, you could feel everyone collectively swoon together at different dynamic points. It’s especially cool to see an off-kilter, experimental guy like Jamie get all the love from a more mainstream-leaning crowd. He’ll never get old.

A simple trolley ride home put the nightcap on a smooth and steady first experience for me at CRSSD fest. I’ll have to attend many more to make up for all the others I’ve missed. See you next spring!