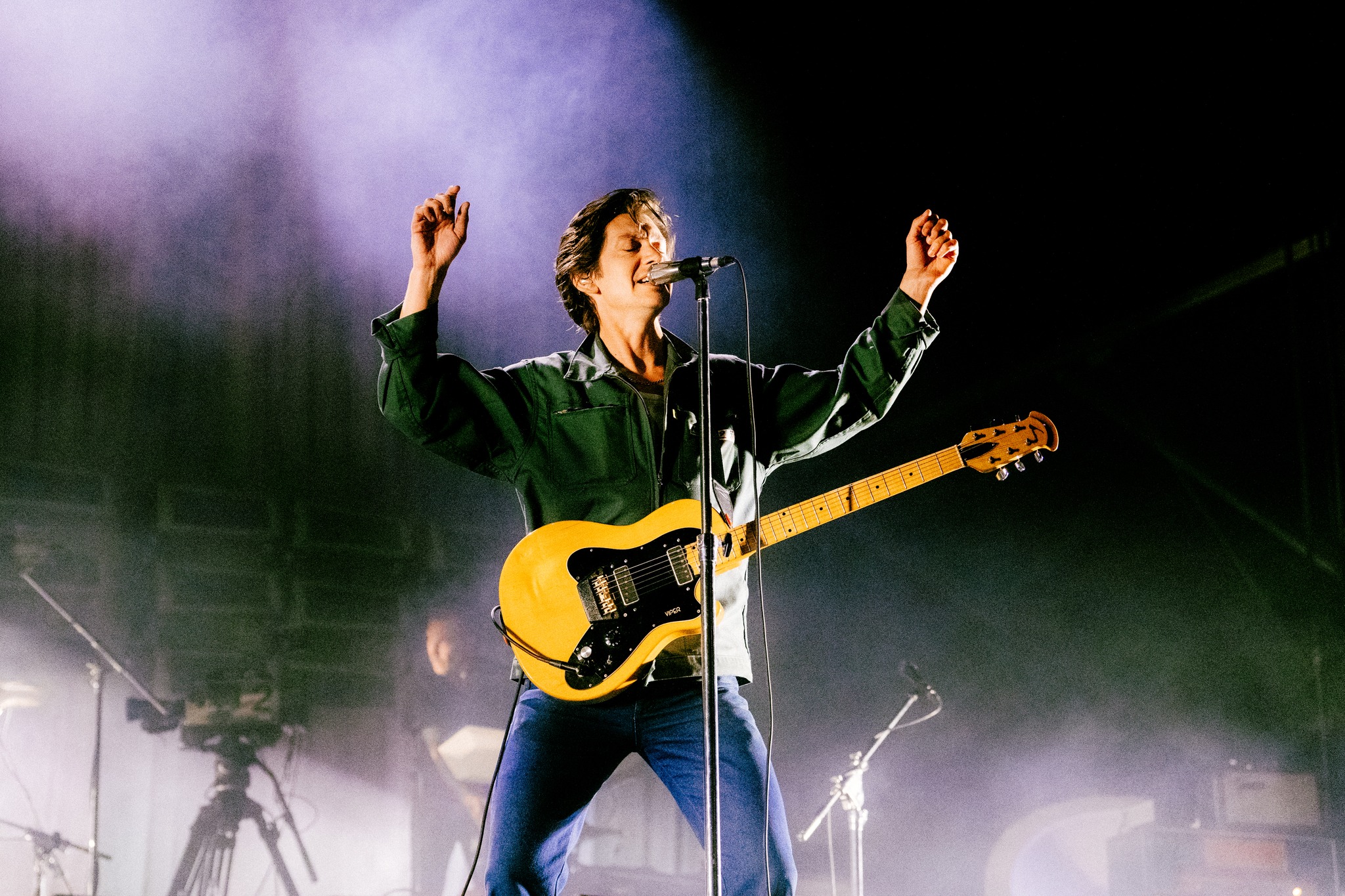 After arriving around 3 p.m. on Sunday at L.A. State Historic Park, I was already taken aback at how crowded everything seemed. By contrast, the first day of the festival felt under-attended. Day 2 felt like it had hit a sweet spot. But on Day 3, the attendance hit what I felt was its full capacity…and some.

That was down to the festival saving its biggest and most popular headliner for last: Arctic Monkeys.

It struck me as I watched Squid that the early afternoon crowd was big as it was for Bicep’s closing set the previous night. Drink lines were already getting long. Good thing I got most of my partying in on Friday and Saturday. For me, Sunday was all about sitting down, relaxing, letting my body recover a bit, and having a good old lazy time.

But Squid made that nearly impossible, being one of the most dynamic and intense live bands around. The English post-punk up-and-comers throttled the swelling crowd with hits off of last year’s breakthrough debut album Bright Green Field, including “Pamphlets,” “G.S.K.” and the epic, proggy set closer “Narrator.” Joining the long list of bands pushing experimental rock music to futuristic new extremes – including Black Midi, black country, new road, Shame, amongst others – Squid also proved their mettle as a titanic force in a festival setting. I wouldn’t be surprised if we see them pop up on a number of the major festival lineups next year.

I wasn’t quite warmed up enough to join the fearsome mosh pit that erupted during Amyl and the Sniffers, but then again, I’m probably not in my mosh pit prime anymore. That didn’t stop me from enjoying the hell out of the Australian garage-punks, led by the dynamic frontwoman Amy Taylor, who thrashed and gyrated around the stage belting out hits like “Starfire,” “I’m Not A Loser” and “Maggot” with fiery aplomb.

Later on that same stage, we were graced by the heavenly presence of Bad Gyal, the Spanish singer, actress, model and dancer, who brought an eclectic pop style and maximal set design. Her gorgeous stage presence and choreography, as well as her mindblowing singing voice, made for an immersive, theatrical set that imprinted hugely on me while I waited in line for a drink. I would have loved to stay longer, but I had to make the trek to see one of my favorite acts in the current alternative-mainstream sphere, King Krule.

The man behind the music, Archie Marshall, is one of the more mercurial artists working today. He only releases albums every few years, rarely gives interviews, and possesses one of the most elusive sonic styles of anyone out there – and that’s not to mention his jaw-dropping, obscure singing voice. Despite a semi-late start to his set, Krule delivered like the King he is. He also drew one of the largest crowds on the day on the main stage, helping the camped-out Arctic Monkeys fans get their money’s worth. “Easy Easy” is an all-time anthem, and the tracks off The Ooze were just as weird and vibrant live as they are on record. Replicating his deep baritone voice is a tall task, but Marshall was more than game.

It’s nice to know there’s some weird artists capable of being mega-popular in this fractured musical climate, and King Krule looks to be the next weirdo savant to straddle the line between the indie underground and the pop mainstream.

As had become our favorite routine of the festival, my group got in plenty of R&R time over on the Smirnoff Ice dance stage throughout the afternoon and evening. Right off the bat, English DJ Sherelle set the tone with her freaky breakbeats and jungle tapestries. The entire day at the Smirnoff Ice stage was expertly curated, with spooky, ominous drum and bass, rattling hardcore breaks and breakbeats persisting via acts like Special Request, Helena Hauff, and the legend Jeff Mills.

Special Request, aka Paul Woolford, released one of my favorite DJ mixes of the last several years (last year’s DJ-Kicks compilation). He did not disappoint, unleashing tracks off that one as well as a bevy of explosive warehouse rave anthems throughout his intricately woven set. As he ushered in the sunset hour, the Smirnoff Ice stage began to swell to its biggest crowd sizes of the weekend, no doubt thanks to the extra fans the Arctic Monkeys brought, but also due to the essential acts booked on that stage on Sunday.

I’d been clamoring to see Helena Hauff for several years now, and on Sunday night, I finally got my chance. The Berlin-based techno wizard unleashed puncturing beats of the industrial variety as she chain-smoked cigarettes amidst a cloud of fog machines and strobe lights. Hauff has evolved so much since her early electro days, and she’s managed to beautifully embrace the more dissonant sounds from the rave sphere. Her set on Sunday was one full of technical precision and dramatic emotions.

After the Arctic Monkeys concluded their rousing headlining set, my group raced back over to catch the final 15 minutes of Jeff Mills. The frenetic legend dropped rapidfire breaks to the biggest crowd at Smirnoff Ice all weekend, and the crowd gleefully ate it up. It was my first time seeing Jeff Mills, and you can bet I’ll be seeking him out at a solo show the next opportunity I get.

Dance stages at festivals are essential to setting the tone, and the Smirnoff Ice stage pulled that off with flying colors. I could’ve sat there the whole weekend and had the time of my life. One day, I just might.

Once nighttime settled in, the party vibes came alive. We opted against camping out for the Monkeys on the main stage to instead watch Arca on the Barcelona Stage. We chose wisely.

There really isn’t another artist on the planet quite like Arca. That extreme slice of futuristic, experimental beat-making – with shades of dancehall and reggaeton – might have some of the same DNA as the late-great SOPHIE, but Arca is truly her own unique talent. On record, she makes incredible, forward-thinking electronic music, and on stage, she’s a straight-up goddess. Performing tracks from all of her recent Kick albums, Arca was powerful and sexy and commanded the crowd from beginning to end. Had she been given a full set’s time, she might have managed to upstage the most popular act of the weekend…

I’ve covered music for a while now, and even then I sometimes have no frame of reference for how popular someone or something is. I’d consider myself a fan of Arctic Monkeys. Not a huge fan, but I did love their first couple albums and have fond memories of listening to them in my teenage years. Somehow I’d never seen them live before, so this was a special chance for me to catch up for lost time. I’d always known them to be a popular rock act, one of the biggest in the world (though perhaps not quite as big as they could be here in the U.S.?). Well, I might need to revise that last part.

Because Arctic Monkeys’ festival-closing set yielded nothing short of pure pandemonium. The largest festival crowd I’d seen since Coachella showed out to sing their heart’s content to not just their biggest hits (AM favorites “Do I Wanna Know?” and “R U Mine?”), but also deeper cuts like early tracks “Do Me A Favor” and “From the Ritz to the Rubble.” The pure collective euphoria that released during “505” was breathtaking. I know it’s a cliche to say it, but, you really had to be there.

The venue was packed to the gills all day, and maybe some adjustments could be made to make the lines shorter, but the experience more than made up for it. Primavera Sound Los Angeles had a tall task in its inaugural year, but it passed with flying colors. Hopefully there is a continued market for interesting, forward-thinking live music that can help this festival series grow here in Los Angeles. I know I’ll be there next year. Until then, scroll below for some final highlights.