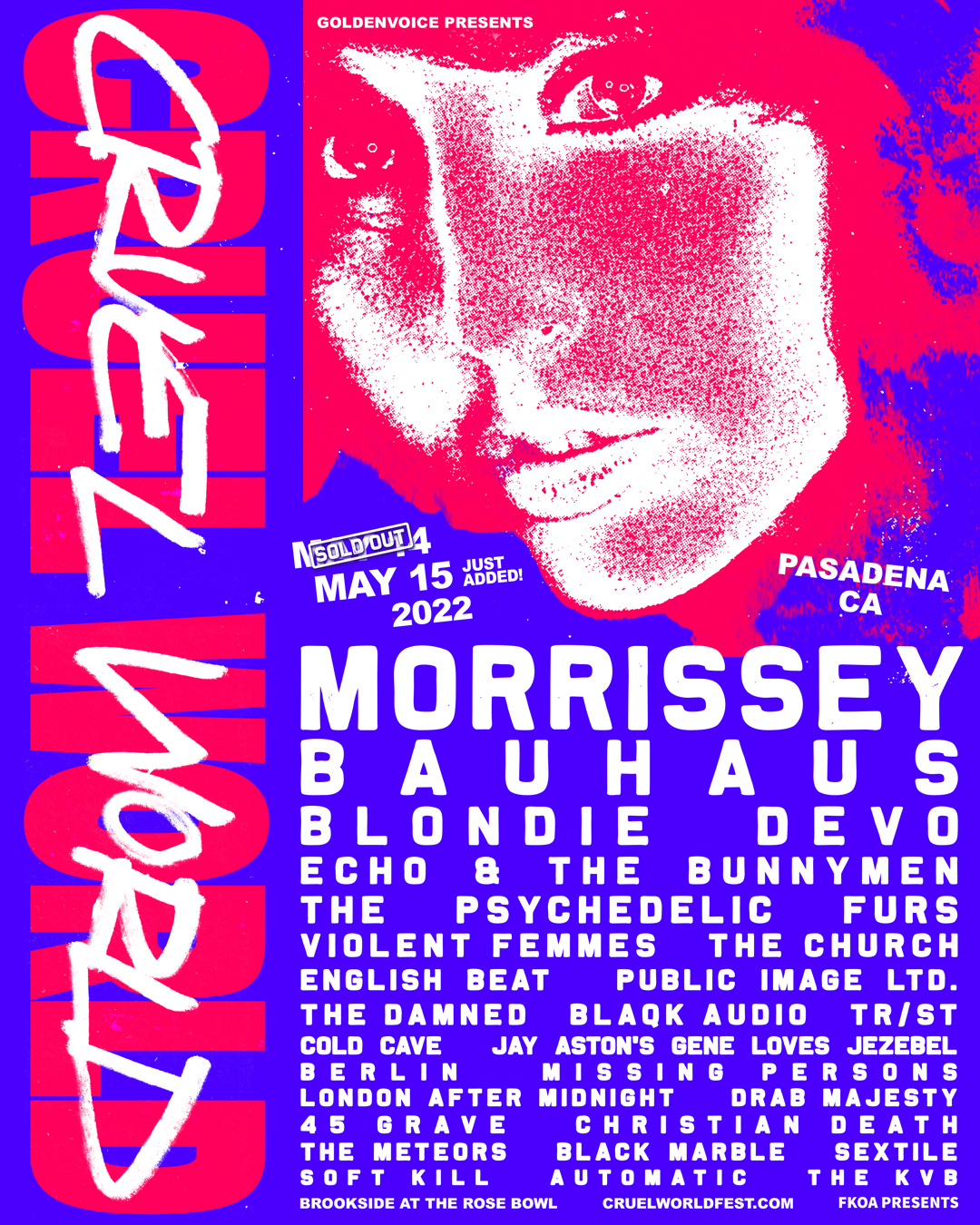 When We Were Young, Lovers & Friends, and Just Like Heaven will be taking notes as the new wave nostalgia bash kicks off this weekend

For Goldenvoice, Cruel World marks the first of two back-to-back weekends of genre and era-specific music festivals, the other being Just Like Heaven – the late ’00s-early ’10s indie and blog rock-leaning fest featuring a lineup of Interpol, Modest Mouse, The Shins, M.I.A., Bloc Party, Cut Copy and many others.

If this sort of nostalgic, stylized festival programming feels like an emerging trend, it’s because it is! In the post-COVID live music era, we are seeing a rise in the genre/era-specific music festival. Later on this summer, Live Nation will throw their hat in the ring with Lovers & Friends, a lineup heavy on acts from the late ’90s and early ’00s golden age of R&B and hip-hop. That one features acts like Usher, Ludacris & Lil Jon, Lauryn Hill, TLC, Ashanti, Ja Rule, Akon, T-Pain, Lil Kim, Ginuwine and many, many more. And then you’ve got the mother of all these festivals, When We Were Young, which debuts in the fall and dives full throttle into the ’00s era of Hot Topic emo, pop-punk and hardcore. That lineup includes a whopping 40+ acts all crammed into one single day (demand was so high that two more days have since been added), including My Chemical Romance, Paramore, AFI, Bring Me The Horizon, A Day To Remember, Sleeping With Sirens, Taking Back Sunday, and a whole gaggle of other bands you might not have even thought about since your middle school days. It’s a lot.

There will absolutely be many more to follow. It’s not exactly clear what is driving this new craze, but it’s easy to see why the major concert promotion companies are taking such wild programming swings. The music festival bubble has burst numerous times in the last decade, with only the gigantic, major destination festivals (Coachella, Bonnaroo, Lollapalooza, ACL, etc.) enduring through multiple recessions and pandemic-related pauses. The smaller, broader genre-spanning city festivals like Treasure Island and Bumbershoot have thinned out a bit. Meanwhile, genre-specific festivals like EDC, Ultra, CRSSD, Stagecoach, and others are still going strong because they target a specific audience who will show up no matter what.

Festival organizers have clearly taken note of this, and have lately poured more energy into targeting crowds who wouldn’t normally attend a massive, genre-spanning fest. That means zeroing in on specific music tastes and giving those listeners exactly what they want. From a fan’s perspective, why spend thousands of dollars on tickets, travel, and accommodations for a festival where you don’t even recognize 75% of the acts on the bill? Discovering new music is a thrilling experience of course, but so is going to a festival that exactly lines up with your personal music tastes, and where you can recognize every single act on the lineup. If you’re a die-hard old school R&B fan, for instance, how could you not go to Lovers & Friends?

As time goes on, you’re gonna see more boutique festivals like these pop up, with lineups that will become increasingly specific. Are you a fan of country music specifically circa 1995-2005? There will inevitably be a festival bill in the future that features Tim McGraw, Faith Hill, Tobey Kieth, Brooks & Dunn, Shania Twain, et al. Are you a ’90s adult contemporary alt-rock and alt-pop fan? I’m sure Third Eye Blind, Matchbox Twenty, Everclear, Lifehouse and Goo Goo Dolls are itching to play that bash. You get the idea.

And so it goes this weekend with Cruel World, a lineup that appealed so much to one subset of music fans that they even added a second day. Fans of goth, new wave and post-punk will be mainlining this lineup directly into their veins, and that’s exactly what Goldenvoice loves to see. They’ve opened themselves up to an entirely new formula for music festival success, and this weekend just might be the harbinger. Let’s take you through a handful of our most anticipated sets:

Easily the most crucial band on the Cruel World lineup. As pioneers of the genre, Bauhaus has done more for goth culture than any other band in history. They’ve only played a small handful of shows since reuniting a couple years ago, so this set has to be considered the most anticipated. Expect a calamitous sea of strobe lights, thunderously dark post-punk riffs, and frontman Peter Murphy’s chilling, mercurial presence steering the ship. A bucket list set for sure.

The wily, funky-hatted new wave magicians are still going strong after 40 years together. In addition to their prolific body of recorded work, Devo have always been renowned for their entertaining live shows. Expect a career-spanning set of greatest hits, from “Whip It!” to “Girl You Want” to “Satisfaction” and so many others. Devo conjure a stage spectacle like no other.

Of all the bands on the Cruel World lineup, The Church are perhaps the most demonstrative of all its many stylistic facets. An incredibly versatile new wave group, the Australian legends have incorporated goth, dream pop, neo-psychedelic, jangle pop, and more into their impressive body of work over the past 40 years. Frontman Steve Kilbey is the only remaining original member, and he continues to impressively steer the ship; his voice still sounds the exact same after all these years! Except a dazzling and emotional set to take hold as day turns into night.

In addition to the ’80s legends that make up the bulk of the lineup, Cruel World also included several contemporary acts continuing the new wave legacy. The best of those bands is TR/ST, the electronic-tinged band led by Toronto musician Robert Alfons. Over the past ten years, Alfons has turned TR/ST into one of the best and most popular synthpop acts in the game. His latest albums The Destroyer (Parts I and II) are excellent. This is an afternoon set you’ll want to get in early for.

Tags: Cruel World, just like heaven, Lovers & Friends, When We Were Young