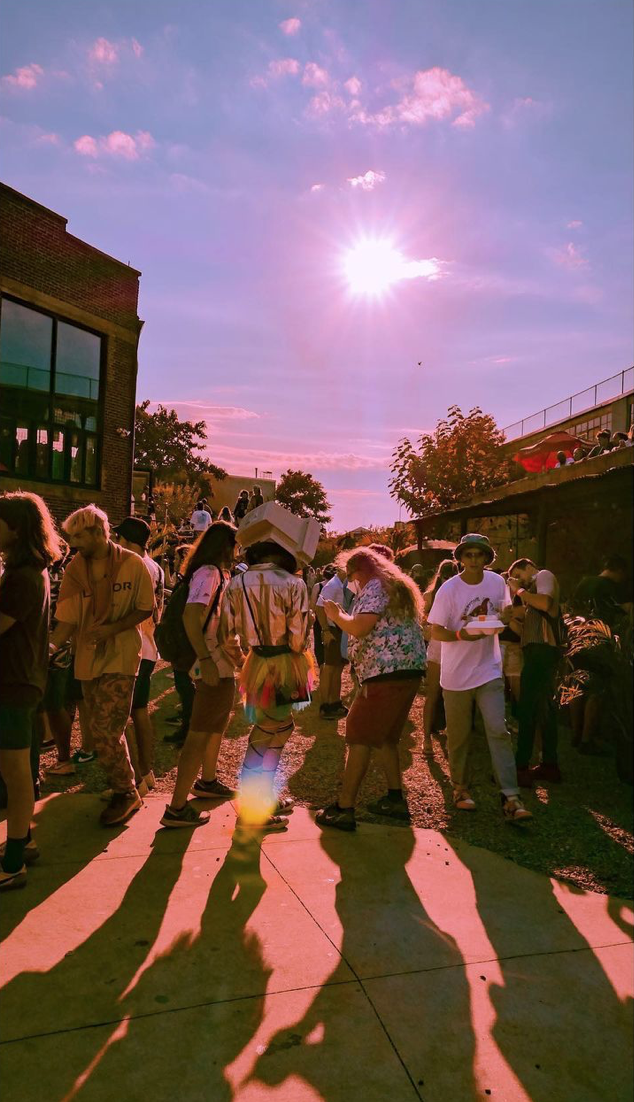 If you found your way to The Knockdown Center in Queens in New York City on Saturday, August 20, you’d find yourself positioned within and around the venue’s fragmented walls and industrial outdoors with thousands of others joining together for 100% Electronica’s third installment of ElectroniCON.

The Knockdown Center is an ex-glass factory turned venue and cultural event space surfaced with hidden rooms, basements, brick walls and art galleries. The venue itself felt like it was made for the vaporwave festival and its attendees. From giant TV-heads to Ed, Ed and Eddy and Pokemon T-shirts, facepaint, mesh and neon, ElectroniCON brought out one of the most eclectic collective crowds. The lineup featured legends and newbies alike to the vaporwave community: George Clanton, the labels founder and festival visionary; Neggy Gemmy, a crowd favorite;  Runners Club ’95, fresh faces from Sweden; a Washed Out DJ Set; desert sand feels warm at night, and many more.

As an “outsider” to this general community, I found myself entranced by their commitment to this wide array of musicians – with no two musicians sounding alike but all having something unspeakable in common. One rocky corner of the venue was glistened with cigarettes and deep talks, another was a brick-lined room filled with people silently awaiting artists at the third stage which the worker told us, “We had to find it” when we asked where it was located.

Every musician on stage had their own aesthetic niche; from EQUIP’s mail coif, to Neggy Gemmy’s hot pink dress and streaky highlights, Vitesse’s iconic hair-do, Luxury Elite’s white mask and gloves, and the Frost Children’s iconic capes and makeup. ElectroniCON felt like a very safe space for both artists and attendees to be whomever they wanted to be without bounds. This allowed for incredibly extraterrestrial and intimate performances.

I spent most of the daylight hours at the outdoor stage in the hopes to soak up as many outdoor shows as I can before summer flees.. Being new to the vaporwave genre, I decided it’d be best to dive into other attendees’ experiences and relationships with the festival to best capture its ambiance and profound sense of community.

Ari (@nyc_street_views), a photographer from Long Island City, captured some of my favorite photographs of the weekend. This was Ari’s first Electronicon. “I was really excited to see Hotel Pools, I’ve listened to his music a lot over the last few years because it’s super chill and he’s really talented at turning a few notes into deep relaxing lo-fi sounds. Overall each crowd at each stage shared the right kind of energy, and while getting to bounce around to see each artist, you got to share in the excitement, the vibes and the pure enthusiasm that you could feel shared between the music and the crowd. I can’t wait to go again.”

Audrey from Philadelphia said, “Cowgirl Clue’s set was really fun. A pit opened up, I go to a lot of hardcore and metal shows, so it’s funny to me that one of the hardest pits I’ve ever been in was during Cowgirl Clue.” She also added, “I thought The Knockdown Center was the perfect venue for this festival. I was really impressed with how smoothly the festival ran – all the sets started on time and there weren’t any notable technical issues. I also saw a lot of the performing artists just hanging out with the festival attendees, which was cool. It felt like a big community rather than fans idolizing these musicians.”

Chris from Brooklyn shared “ElectroniCON is basically a vaporwave pilgrimage. I flew from Japan to attend the first ElectroniCON in 2019. This time I went with a friend I bonded over vaporwave, and even met someone I met at a vaporwave show in Japan! Something about being in the presence of so many vaporwave fans was an interesting feeling. We were all physically here because we were drawn to this weird genre – however we discovered it.”

“The absolute star for me was Luxury Elite – who I wanted to see the most! The lace gloves with the mask was giving a vapor-mystique. [ElectroniCON] made me realize, a part of why I enjoy vaporwave is because I almost get to consume an era of culture I grew up with, only this time as an adult, and being more conscious of it. It’s nostalgic entertainment.”

“There’s a strange allure to vaporwave especially when paired with visual material from the late 80s/ early 90s, such as TV commercials. I have this memory back when I was a child in California, of light jazz being played in Staters Bros, this grocery store my parents went to. It’s that kind of music but played around with. Not only can we enjoy it sonically, I’m sure many of us play a montage of cheap 80s/90s visuals in our heads while listening.”

Angel from the Frost Children:

“ElectroniCON was a great opportunity to continue the cosmic intergalactic plot that we were set on after George assigned us to the elite mission of saving DJ Ryan. It was also cool to play music in the daylight to people who hadn’t heard our music.”

“It felt good to scream and sign in the sun and see people bouncing up and down.”

“The most special part was probably meeting new fans at the merch booth and performing with Neggy Gemmy for a track on the main stage, and also seeing two minutes of Giant Claw’s set was a massive dose of inspiration.”