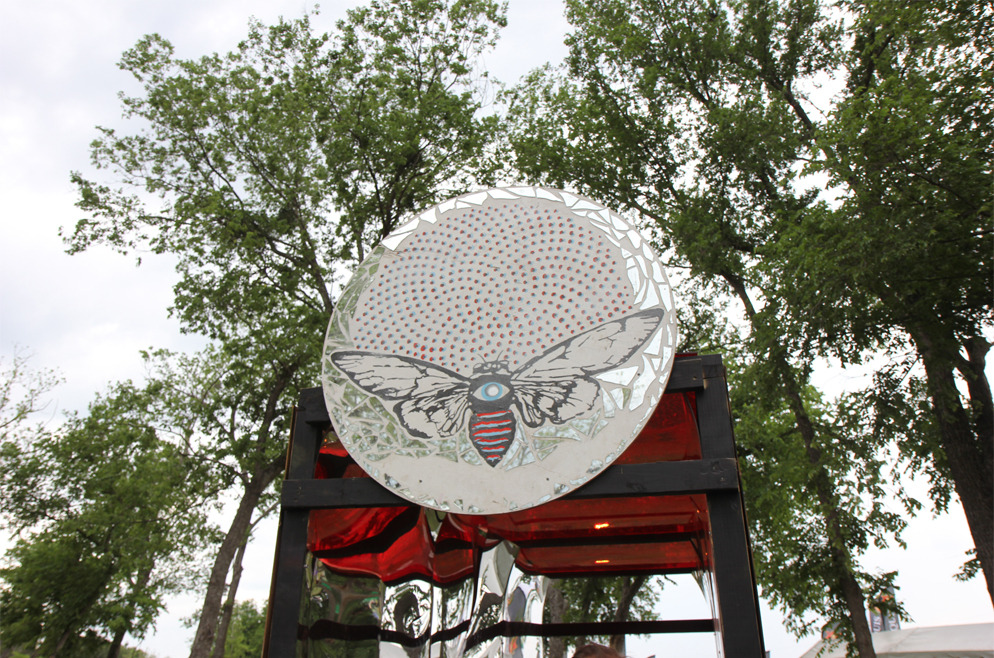 Out where the sky stretches for miles and the world travels close overhead, zooming in planes that cut through the clouds with drawn-out sonic whomps, hundreds of freaks descended on Carson Creek Ranch to feel far-out during last weekend’s three-day Austin Psych Fest – looking like unclean ants in Technicolor huts to those suits in the sky.

But on the first night of the fest, what those nighttime travelers can’t see is that we’re all drunk on overpriced Dos Equis – if they were here they could smell it on us and jump back yards when they saw the size half of these folks’ pupils. They can’t tell that the whole mess of us are already burned out from a full day of fuzzed tunes, grouped in a muted herd on plastic-grass-covered tiers in the best of Psych Fest’s three stages perched on the edge of the Colorado River, watching OM play in the early dark. They can’t hear the band’s heavy, evil-surging beats reverberate throughout the darkness and disperse over the fields behind us, and whizzing by so fast, they won’t be able to see the full moon rise almost in fast-forward above the stage, called from the depths by the band’s howling guitars and our open mouths. But we see it, and it blows all of our fucking minds. Welcome to Psych Fest 2013, where reality is weirder than the shit you’re on.

This year, the fest moved from warehouses to the outskirts of Austin, and expanded to include three stages, a camping ground, and more (questionable) sponsors. My traveling companion and spiritual advisor, Kayla, and I traveled down in a far too small tent to sleep in the dirt, mingle with the masses, and see this year’s stunning line-up

Starting off the weekend with stars in our pockets the night before the fest began, Kayla and I met our future campmates in the line outside of the Red 7 pre-fest party. Two Nashvillians with a welcoming way about them: Heather, a blonde-haired girl with a huge smile, bigger laugh, and outsized, energetic personality that burst from her tiny frame into streams of long jokes and funny characters that would keep our Canadian camp neighbors entertained for hours during Saturday night’s torrential downpour – a girl that both put you at ease and dug sincerely deeper into who you are, and who awoke in the morning with a quiet, squinted softness that blurred the world; and Meghan, raven- haired and relaxed – almost still at heart – with a deep, lasting grin that seemed to sink to the core of the earth and piercing, doll-like eyes with dark lashes that took the world in wide and calm. At Red 7, we took shots, exchanged numbers, and agreed to join their camping area the next morning.

Waking up on Friday, after a full breakfast and a partial fill of much-needed Austin wandering, we made our way to the campsite in a covered pick-up, sipping High Lifes with two dudes we met at Sidebar the night before who had a tendency to snort shit off hunting knives and cross our path wherever we wandered. Together we traversed the huge, gray parking lots tucked back off an un-marked exit just a few miles away from the Austin airport, towards the camping grounds. The guys at the fest gate only squeezed our luggage, intent on finding nothing – a theme that would recur throughout the fest as the benevolent staff kept it chill for all three days, only freaking when campers kept unplugging the power to the showers to plug in their iPhones. We set up by Meghan and Heather’s canopy near the only tree in the vast camping lot, passing oddly-shaped domes, teepees, and every color of tent you could think of, the whole swath of relatively untouched ground now filled with sounds and smells of the normal fest rats, hippie freaks, random bros, and a formidable coalition of accents.

Compared to last year’s fest between Emo’s East and Beauty Bar – stuck between two warehouse-style clubs – this year’s first day brought a whole new vibe to the thing that couldn’t be attributed to the kind of un-showered crowd that only an outdoor music festival could attract. As each band played their own brand of mind-melding psychedelia, sounds that would normally live in the concentrated, cave-like areas where today’s stoners thrive were suddenly blasted big and wide across the acreage, expanding into a weirdo arena-rock that gave everything a thumping, engulfing sound, whether it fit the mood or not.

On Friday’s main stage, Bass Drum of Death and Warpaint built on the big crowds, playing huge and heavy to their thick nodders, though Warpaint broke the drone with their precious, piercing lullabies, winning the hearts of every blissed- out soul in the swarm. Maybe because of the big spaces their music was meant to fill, desert soldiers Tinariwen played Friday’s stand-out set to a densely peopled field, spreading the mellow as the sun set before OM’s magical moonrise. For those who didn’t quite make it past party-hard o’clock (ahem), Acid Mothers Temple not so gently swayed our drunk asses to sleep, booming across the darkened campgrounds.

Saturday, we escaped from camp with two Austin newbs to introduce them to one of our favorite brunch spots – Bouldin Creek Café – and stock up on more affordably priced provisions. When we returned, we danced the afternoon away to high-energy sets from Night Beats and Golden Animals before the skies opened up and the rain fell so thick and hard it felt like hail, and there was no way to enjoy the mud and water-terror except to run back to the tents and giggle with the other shelter-seekers. Fortunately, the rain quit in time for Black Mountain and Deerhunter to end the night. Bradford Cox was in top shape for the Psych show, wearing a patterned dress and black wig and shouting things like, “ARE YOU HIGH?” and “LET’S GET SOME MORE PSYCHEDELIC LIGHTING FOR THIS PSYCHEDELIC FESTIVAL!” into the crowd. At one point, a car alarm started going off in the distance, and Cox insisted the band jam along to it for a while. The most tiny, most tripping dude spent half the show literally tripping over me until I thought I might stomp him out. I had to move to the left to see the rest, but even in the mud puddle I was not denied Deerhunter’s purple-drenched set as a perfect end to the damp day.

After the torrential downpour, heat waves and bright rays broke through the clouds on Sunday morning, burning off every wisp before 9 a.m. and frying our wet tents and soggy clothes back to a pack-able (if totally brown) crisp in no time. The day started sleepy, with everyone wandering around in the sun, eating breakfast tacos and waiting for the crowds to descend one final time, holding back for the late afternoon when some of the fest’s best acts would take the stages for the final hurrah, understanding that all the drugs had to be ingested by the end of the night.

Starting off our early afternoon, we shot-gunned half-priced campground beers before making our way to the White Fence show, where Tim Presley did his best to be heard in the big, bad world. Though we may have been the only dancers for Presley’s set, The King Khan & BBQ Show finally, FINALLY got some bodies moving and the ONE and ONLY moshpit of Psych Fest broke out – gentle and kind as it was. After the high-flying, body-bumping mood of King Khan’s set, Dead Skeletons brought us way down in the early evening, chanting “DEATH. DEATH. DEATH.” in a dirge as terrible as my worst nightmare, even as beautiful lattice-white lights stretched across the trees behind their river stage set up.

With our mellow thoroughly harshed, I grabbed a quick nap before The Growlers took the stage in the Levitation Tent, filling the space with their cut-out, child-like props and rambling gypsy-stoner rock that put everyone in a good mood. The second biggest dance party of the Fest opened up here with a huge, burly bearded dude thrashing his body around wicked fast and happy while tight-thighed young things shook and shimmied in a group of gender-inclusive vibrating bodies, everyone howling along to their favorites. Clinic ended the night with a heavy set that sounded too close to the rest of the fest performers to really make a splash, but die-hards were packed in never-the-less. We found an open space behind the stage, where we could watch the shadows and dance silly without shame.

As we wandered around the fest grounds on the last night, everyone and their mother was dosed with something or other – fungus or alphabet soup, mostly, for those with curious minds – and after the music stopped, the night transformed into one long, strange trip. Between the tossed bottles and bent plastic cups, black grass lit by huge halos of high- powered spotlights, we encountered one glass-eyed fool after the other. Approaching two limp objects under a tree, we found a fresh-faced, totally gone kid lying smiling next to the beached form of the plastic, formerly pure white Red Bull statue, now coated in scribbled hippie graffiti spouting messages of love and drugs in multicolor marker. Under the tree, we were soon joined by a black-eyed toughie wrapped in a woven wolf blanket that his new friends had talked him into buying along with some MDMA. All together, after some fast-paced rambling and mumbling, we helped Wolfman carry the colored bull like a dead thing across the field to his blank-faced comrades who seemed little more than strangers to him before we jumped back into the night and our own hard-won sanity as they started to crawl over the thing like confused ants.

Though we slept like stones, the rest of the drug freaks were left to wander, so that when the dawn shone gray and Kayla stepped outside for a cigarette, the fields were covered with bleached-eyed zombies, still walking aimlessly under the Texas sun. As we cut out early for the airport amidst overflowing trashcans, collapsed tents, and groups of people lying on the grass asleep and unsheltered, it was too early to tell – they may be there still.