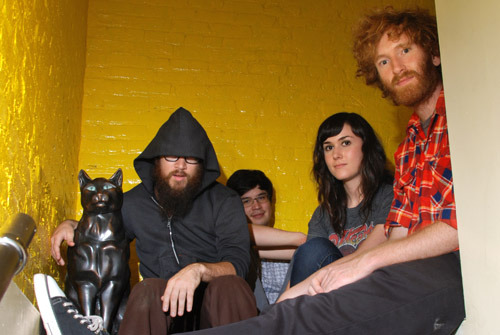 Parts and Labor seemed to have hit their stride. With the addition of a new drummer and full-time guitarist into the fold, the band is expanding sizewise, and judging on their newest full-length Receivers, soundwise as well. Their strongest album to date has Parts and Labor getting cozy doing what bands like Sonic Youth, Husker Du and Oneida have done in the past by molding noise with rock for a record that's totally accessible to crowds that enjoy either of the two.

Keyboard/electronics guy Dan Friel, guitarist Sarah Lipstate and myself commandeered a huge table in a Williamsburg cafe to discuss the making of the new album.

Impose: So this is your first album with new members, how do you think it went?

Dan: It was awesome but it was also kind of a crazy process. Sarah joined the band a month or two before we started recording the record, and couldn't leave work to come record with us in Milwaukee where we did the bulk of it.

Sarah: So I recorded all of my guitar parts in a basement in New Jersey at [bassist] BJ [Warshaw]'s girlfriend's house.

Dan: It should be mentioned the basement in New Jersey kind of looks like Romper Room.

Sarah: It looks like a Twister map on the floor.

Did that help you get better guitar parts?

Dan: I think it induced madness.

Dan, you were one of the originators of the band…

Dan: Yes, me and BJ and Chris was the drummer [after Jim Sykes and Joel Saladino]. Chris left in last July because he couldn't tour anymore when his writing career was taking off so he had to choose between the two. Now he's writing the 33 1/3rd book the Public Enemy album It Takes a Nation to Hold us Back.

So initially you guys were a three piece, what made you decide to get a full-time guitar player?

Dan: I was playing guitar and keyboard, sort of alternating between the two. Sometimes both at the same time. It was too much multi-tasking for me. We just decided to make all of the changes with Chris leaving and getting a new drummer and guitar player all at once.

Sarah, you have a background in more avant-garde, drone kinda stuff?

Sarah: Thats what I was doing prior to joining up with these guys [With her project Noveller). I lived in Austin for about 4 and a half years. I played in a duo where I was playing guitar and theremin and doing more soundscape stuff then I moved to Brooklyn and started doing more stuff with the double neck guitar. So this is the most traditional guitar playing I have done.

Dan: It's the most traditional thing I've ever done. The bands I played with in high school were like total noise and grindcore and a lot of improv.

So when you started Parts and Labor who focused more on the electronics?

Dan: It was me. The way the band started was I was doing early Parts and Labor songs by myself and I asked BJ to play bass. So we were like “we can turn this into a whole rock band.”

A quote I read of BJ's was “in the beginning we were trying to mix very harsh sounds with harmonic sounds…I snapped and just wanted form.”

Dan: I think what he was talking about was the band in general. Even the early stuff we wanted that. The two of us met when we worked at the Knitting Factory in 1999 and most of the people working there were into improvised music.

For the first couple of years we knew each other all we listened to was noise and improvised stuff. When BJ was talking about form I think he meant he wanted to take all the things he learned texturally and compositionally but I want it to be a rock band.

So putting this album together, does it just take its own form or was it pieced together slowly?

Dan:This one was put together sort of quick. It was kind of chaos. We knew it was time to do another record and wanted to have one out this year but we had the new members. I had a few songs I was working on, BJ had a bunch but they weren't fully done and we just sort of threw it all together, which is not how we necessarily worked together in the past and it resulted in a real crazed rush to get everything together in the end but it worked out.

Would you say this album more straight forward?

Dan:It is. In a way it sounds straight forward, but the songs are much longer than pop songs are. Our last album had twelve songs on it and was the same length, this one has eight. It was combination of going a little more straight forward and slowing things down a bit and getting more into our more psych influences. We wanted more Pink Floyd on this record and BJ is a huge fan of Eno's pop records. Stuff that's weird but isn't all harsh and fast, which is what the other albums sort of dealt with.

Dan:We were sort of burnt out on all the harsh fast stuff and we were working with a different group of people.

You had the open call of sorts for people to send you sound clips that you would implement into the record. How did that end up working out?

Dan:That came from watching a documentary on the making of Dark Side of the Moon. Like all the laughing in the background and stuff like that, that was all from interviews and sound clips and BJ was watching it and said “we should do something like that so we came up with a list of questions together. We wanted this to be more inclusive and it helped us come up with new ideas. We had this whole library of sounds that could help us bring this record together.

How many sounds did you guys get?

Dan: There is one contributor that sent us literally hundreds. This women who put up fliers all over the city and in other cities too asking questions like “what happened?” and she had this answering machine to collect all these peoples answers and she saw we were looking for snippets, she sent us all of those.

So are you ever going to use the other samples you got?

Dan:We technically used all the ones we got. On the first song we play them all at the same time. We put them all together in that great big rush of song and that us the one about information overload.

The Parts and Labor release show for Receivers is tonight at Impose's Not-CMJ Party at Death by Audio.