Back and Forth with Evan Weiss and Mike Kinsella 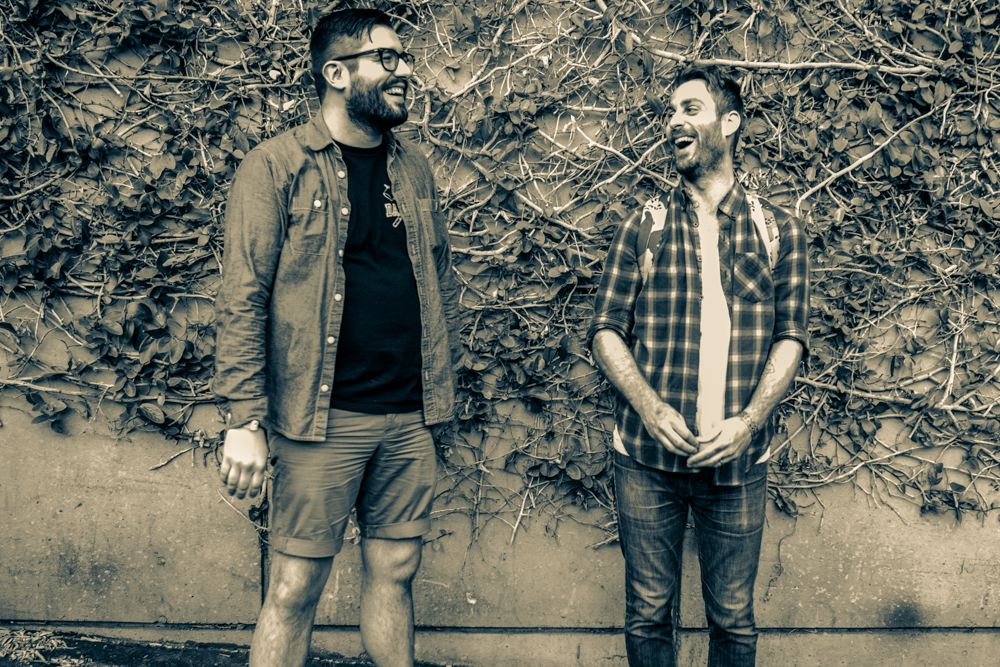 Evan Weiss and Mike Kinsella may inhabit the same city, may be fixtures of the same scene, may play in a band together, and may even be on tour together at the moment, but there is no mistaking them for each other, be it in disposition, appearance, or ethos. Kinsella is blunt and charismatic, what some might call rough around the edges, but not in a threatening or dangerous way. Weiss is more refined in his speech and boyish all around, wearing shorts that make you realize how rare it is to see a grown man in shorts outside of a gym or the beach.

Besides the aforementioned connections, both musicians also share a similar need to be prolific, or at least they seem to from the outside, before actually meeting them. Headlining the tour is Kinsella’s band Owls, for which he plays drums, and opening is Weiss’ Into It. Over It., usually a full band but on this tour it’s just Weiss. Owls had been dormant—at least recording wise—for 14 years before this most recent effort, similar to Kinsella’s songwriting project from the past, American Football, who will be touring later this year. Of course, Kinsella also played in Cap’n Jazz, has his solo project Owen, has played in Joan of Arc, and as Their, They’re, There with Weiss, in addition to a number of other projects that either never really panned out or that he couldn’t stay in for whatever reasons. Confused yet?

Though his career may seem a little scattered, Kinsella asserts that it’s been a pretty natural progression.

“My brother Tim was just in high school and he started a band and they would practice in our basement,” Kinsella recalls, with said brother being the leader of Owls as well as many other noted projects. “I used to hang out down there and pretty soon I playing rhythm guitar. The model we would look to was the DC scene, which wasn’t about really making money. Most of the bands weren’t even popular. Bands we like were bands our friends would bring into town to play the VFW from East Coast.”

“It was a thrill just getting to play with bands you liked,” he continues, “and it was only recently that I realized you can make money doing this. I mean, if you practice and if you put time into making your records and all that other bullshit.”

This c’est la vie-attitude makes questions about the band’s legacy and whether he would recommend his path as a “business model” seem even less cool than the low bar they had already stood on. Weiss explains it best:

“I don’t know if I gave it that much thought. I was maybe fourteen or fifteen years old when I started playing in bands, maybe younger. I think the original goal is just to get together with your friends and our parents were actually psyched about it because it kept us from going parties and getting into drugs. We were just making something in a basement so they didn’t mind. And that first band was a band until 2008, so we kept that going as long as we could.”

“All I was doing was quitting bands,” Kinsella adds.

“It wasn’t so much that I was anyone as a road map,” Weiss continues, “but that I wanted to be playing music more than anything else. There were ways to facilitate that addiction or habit, and it contributed to one large growing process.”

“It satisfies different urges,” Weiss says, delving further into why so many projects is beneficial. “There’s many things that I wouldn’t do completely myself. Like I don’t want to write hardcore music but I like playing hardcore music.”

Kinsella can’t name off the top of his head how many bands he has recorded with, deflecting to Weiss, “You have more than me and are younger than me.”

“Oh yeah,” says Weiss, “I must have 20 bands or something. It might have just been a demo, but it was still something.”

“I feel like I’ve been in half of that,” Kinsella says. “Most of the bands I am in now, I was in ten years ago. I just ended up quitting a lot of bands because I was either starting school or finishing school or some guy is fucked up on drugs.”

Nothing about this seems abnormal to the pair because it is all they have known. Where from the outside, you might fear burning out or losing interest, Kinsella and Weiss can’t imagine doing it any other way.

“I separate my stuff really well, I think,” Weiss notes, “where I don’t have to primary songwriter on some bands. It can be more me coming in as a secondary source, to come in and shape a song. Like arranging a song or something like that. Really, at this point, the only one I have to come up with all the ideas for is Into it. Over it. Their / They’re / There or Pet Cemetery are two other bands I’m in right now and I just show up to play bass or sing. But Into it. Over it. is mine. That’s where the focus is. The cool things about the other bands is they are all casual. Like, we all happen to be home, so we do something. More something to fill time than to focus time on.”

For Kinsella, his flagship project, Owen, might be less known that some of his past projects, but that doesn’t make Owen any less important to him. He considers it focus of his music, with the others having long been dormant or being something where he fell into a very defined role that doesn’t require him to write in the way he does for Owen.

“American Football is a weird one because I have been so detached from them,” Kinsella says. “I have to remind myself that those are my songs. Of all my bands, we played the least amount of shows. When we said we do these new shows, it almost felt like we were a cover band.“

But it works for them. Neither have jobs outside of their music. And Weiss admits that having all the outlets helps make the musician career work. “If Into it. Over it. is in a lull, I have all these other projects I can work on.”

The two stand against a wall as I pull out my camera and Weiss jokes, “So would you recommend being a writer and a photographer as a business model?” And as I answer, we are all sort of linked by the hustle to do what we love, somehow finding ourselves on the Sunset Strip on a Saturday night, making a living for what we started doing for fun. It won’t work for everyone, but it works for us. The only business model we have is hard work and stubbornness.