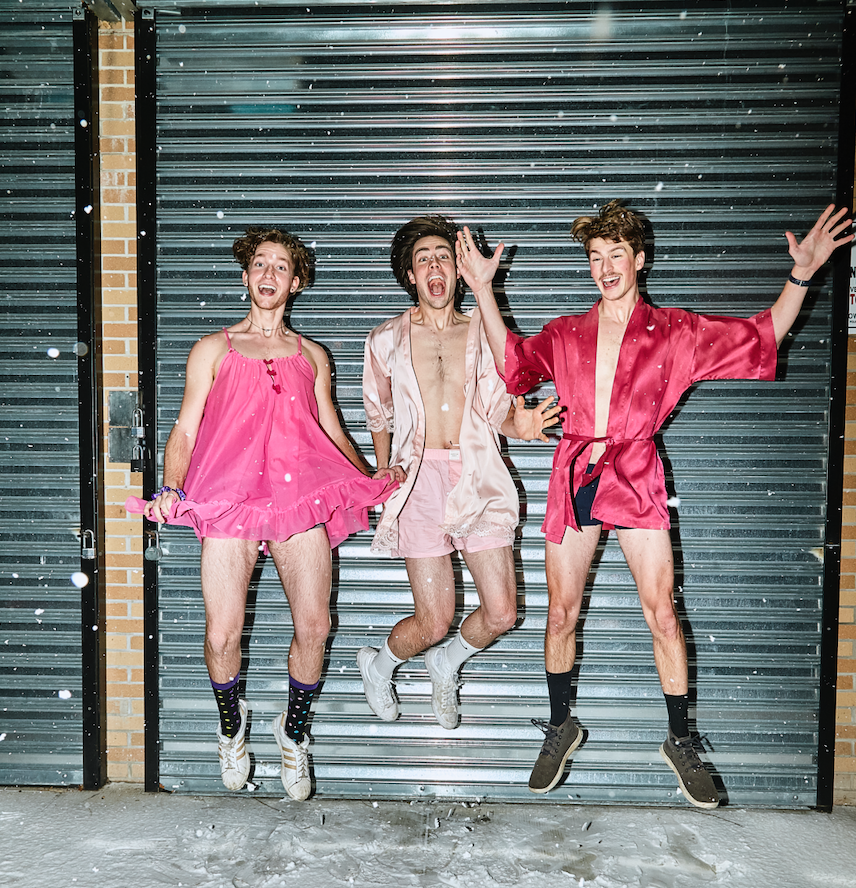 Brooklyn-based trio Mary Shelley, named after the author of Frankenstein, has officially entered the NYC scene with the release of their debut album, Look at You (which you can purchase HERE). The record is a 10-track trip from punk to funk and many things in-between. The group consists of vocalist and guitarist Jackson Dockery, drummer Charlie Hull, and bassist and vocalist Sam Pinson.

Look at You twists and turns through the lives of its anguished characters, touching on addiction, adultery and masculinity in punk-infused fashion; An ex-WW2 veteran in a nursing home who can’t remember his wife, fraternity pledges and a Brooklynite party-attendee who aims to please them all.  “Paddi Smith” talks about gentrified New York and the romanticism of Just Kids, “Democracy is Alive,” well, you can guess by the title, alcoholism in “goodnight goodbye” and adultery in “Mr. Jack.” And through the anguish and addictions, Mary Shelley still defends life to its fullest, like Frankenstein who hails the namesake honor, through the act of making music about the mundane and bleak.

Impose had the chance to sit down and have a conversation with the group and discuss in detail their genre-bending style, how they write best as a group, and why they like to“show not tell” below.

You can also check out the group in NYC this spring at the tour dates below:

This is for our “NYC Scene” column, so I have to ask about New York’s influence on your band. I know you guys are a Brooklyn band, and with so many incredible bands out in Brooklyn, how has the music scene contributed and influenced you guys?

Jackson: I think it’s just very supportive. Everybody is so nice and by playing more and more shows we build our network and we’re able to open for other people’s shows. We saw IDLES and Gustaf opened up for them, who is a Brooklyn-based band, and now were huge fans. I think it’s incredibly supportive.

I hear a lot of IDLES in your guys’ music, would you say that’s something that influences your sound?

Sam: I feel like IDLES is the leader of the punk scene right now. If you’re in the punk genre you gotta be taking notes from these guys.

What are you most excited for listeners to hear on your debut album?

Sam: I’m excited for people to hear the progression of our sounds…none of us had really ever recorded a full album before. You can hear how much we learned through the recording process, and the progression of our interests in music and adding different complexities and things like that. I’m excited for people to hear “Paddi Smith,” because people who have gotten to see that song performed live really love it.

Jackson: I think the order of the album, thanks to Sam and Charlie. It starts really heavy and molds and gets more positive but with a punk edge, and ends in a completely different place with synths and hip hop. The way it contorts, it’s not just a different genre every song, but slowly it takes you along from each song making it more palatable to someone to open up their mind to what we can do. I think that’s a scary thing to ask an audience, hopefully this helps people be okay with us trying new stuff.

It’s exciting that with modern music, artists are openly allowed to really be expansive in the genres they add to with their releases. On ‘Look at You’ you guys really play with so many genres – punk, new wave, hip hop, etc. When making a song, did you guys write the song and then decide to add whatever genre’s respective elements, or how did your song-making process come about with this influx of musical influences?

Sam: When we first started Jackson would come in with a song and we would jam out, and then we started just improvising in the room in between rehearsing songs. We needed time to be able to just let your mind go and play something, Jackson starts playing something crazy on guitar and then Charlie adds in a part and then I’ll add in a part and we’ll realize we have something, like “oh this has a little hip-hop, or shoegaze” and then we’ll decide to run towards that or away from that. It’s very organic as we’ve gone along, and even the ones that we’ll come in with preconceived notions, the other two of us will totally change the song. Whenever we notice the genre it’s after the fact. With the exception of a few times

Jackson: I think it’s funneled through what our tastes are. We all have similar bands or artists we all touch base on like Talking Heads or IDLES– But then Sam loves Toole, and funk stuff like Red Hot Chili Peppers. I’ll want a very simplistic baseline because I like really simple things and Sam will make it way more dynamic and better. Charlie loves a lot of disco and dance stuff that he’s played around with like more bright and pop-y drums and even heavy metal. We’ll each come in with an idea and it’s very quickly colored by all of our variations. And we’re all very much about not trying to write the same songs twice. We all have a lot of bands that we love that have great songs, but a few of them sound similar. I think we make a conscious effort to not write the same rhythm or same songs.

I understand that you guys are a group of “not just musicians but also actors and film buffs”. Are there any moments on this album that are inspired by films? Do you think also being actors has altered or enhanced how you tackle your live performances?

Charlie: For sure, one thing I noticed early on in Jackson and Sam’s lyric writing is they sort of take on the mentality of these characters and explore a moment in their lives, or what it would be like to be that person, obviously based a little on themselves. Performance wise they’re out there jumping, dancing, you don’t just pick that up one day, that’s hard work.

Sam: I think with a live performance, being comfortable on stage, having gone to school for acting, makes being on stage sometimes more comfortable than being in normal day-to-day life.

Jackson: I think one of our favorite things is when we see a performer and they’re like a character, like I saw Sloppy Jane performance once and they take on another worldly thing. Or, when you’re watching something and somebody’s in a zone – we all get into that – that feeling of watching a different version of another person. I think in lyric writing it’s a lot of fun to pretend. We have a song called “The Nursing Home Jig” which is about an old man losing his mind and his wife trying to bring him back. Those are two very crazy fun characters. I think it’s born out of a real thing. I remember seeing my grandma towards the end of her life and her losing it and that kind of feeling of when you’re not aware of you losing your own faculties and just how maddening I’m sure that is. I had this nightmare I remember towards the end of her being like “Hi, How are you?” and we start laughing at her and she doesn’t know why we’re laughing. Whenever we write stuff it’s born out of real fears or anxieties and then we exaggerate it or put it into a different character.

I understand that you guys create characters that in one way or another embody aspects of yourselves, but exaggerated into these fictional people. Likewise your name Mary Shelley is inspired by the classic novel, Frankenstein. Both your themes and even Jackson’s vocals have kind of an 8’0s horror movie quality; haunting but not in a scary way, in a more aesthetic way. Why paint all your characters with this monster-esque quality?

Sam: That’s something that peaks our interest a little more. With punk music, it’s supposed to scare you a little bit, and if the theme and the way it’s delivered is a little in your face and monster-y, that sort of character attack, forceful vocal is what draws our ear. The stuff we’re writing about just kind of has an in your face quality that we add the vocals to.

Jackson: It’s in your face in a way that we really like which is “show don’t tell more.” There’s so much punk music out there that’s like ‘don’t do that, do this, don’t be this” but i think its much more effective when you paint that imagery. I’m proud of the stuff we come up with where we’ll paint an image of what it’s like to be very alone at a university and you’re pledging a fraternity and just what motivates young men, because it’s a fear of being lonely is the main thing that motivates these young men to join these groups and group think gets involved and people who are very well meaning to bad, terrible, awful things. We have a lot of fun not just telling people, “old people are people too,” but instead showing them a person, and the more grotesque you make them the more they jump out to you

Charlie: I think some of the most compelling songs are the ones that sort of paint a picture, but you’re the one filling in all the details. I think our songs give you a character and a mood and you can take that and build out anything.