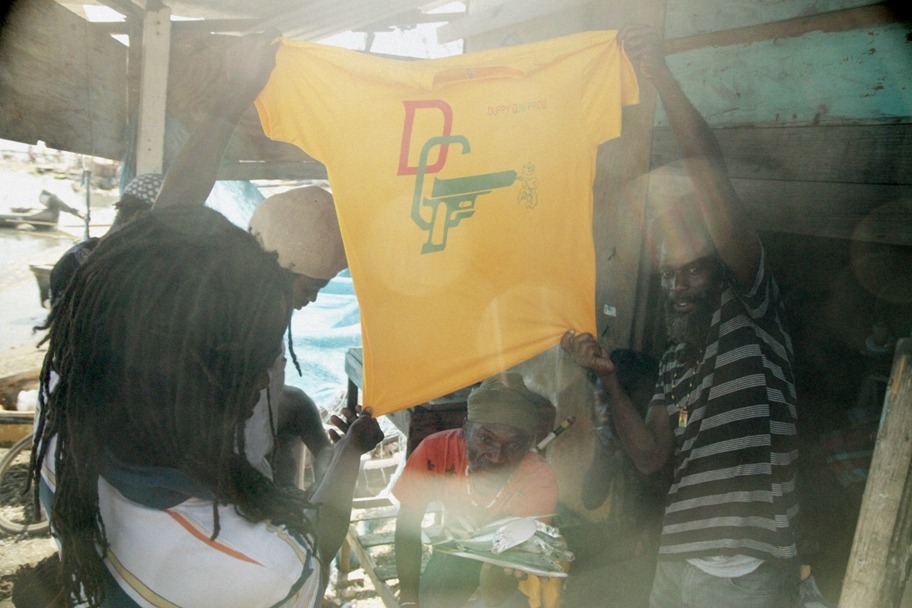 On a warm night just outside Kingston, Jamaica, a young man sings into a microphone in the foundation of an unfinished house. Wires hang from the ceiling, the dim lighting falling flatly on the dull grey of the concrete walls. A laptop sits atop a stool along with a small recording interface, the engineer carefully tracking the vocals as they come through. A small crowd has gathered to watch. They sway lightly, their bodies feeling out the rhythm as marijuana smoke fills the air. It’s an unusual scene, but the Portmore-local appears to be at ease working with the LA-producers to create what would become the fourth installment in the Duppy Gun series.

When Cameron Stallones (Sun Araw) and Ged Gengras (M. Geddes) headed to Portsmore, Jamaica to work on a record with reggae-roots legends The Congos back in 2010, they were unsure of exactly what to expect. The NYC-based label RVNG.Intl had engineered the trip as part of its FRKWYS project, a series that pairs up contemporary artists with influential forbears to collaborate on a record. Label-head Matt Werth had suggested The Congos and two weeks later they were on a flight to Jamaica. The 10-day recording session that followed would culminate in a 12-inch called Icon, Give, Thank, a full length documentary film entitled Icon Eye directed by Tony Lowe, and an idea that would only begin to fully take shape in the months to come.

Through the Congos project, they’d been introduced to a multitude of musicians and songwriters from the local community.

“Recording and production down there is super social and people just roll,” Cameron tells me over the phone. “So we were chilling with a lot of Rastas and a lot of musicians and eventually they wanted to do tracks.”

He, Ged and I are on a three-way call to talk about the latest release on their dub imprint Duppy Gun.

“We had these tracks and everybody who was there just really kept pressuring us because [they] wanted to record,” Ged adds. “There were some of the more established musicians there and then a lot of the younger kids who just wanted to try it.”

Following the Congos’ sessions, Cameron and Ged were left with a bunch of unused fragments that didn’t quite work with the record. Late one night they were finally cajoled into letting one of the Congos’ nephews get on the mic. He’d spent a lot of time hanging around the studio while they tracked the Congos record, but had never actually recorded before.

“As soon as we started hearing it, it was definitely one of those forehead slapping moments when you realize that there's something amazing here,” Ged says. “I think we had the label name within like 45 minutes. We were already sketching it up, it felt like a necessary thing. It was one of those moments where you're like, ‘How dumb would I have to be to say no to this?’” And thus, Duppy Gun was born.

It’s an improbably marriage, the pairing of dancehall vocals of Jamaican songwriters with the spaced-out riddims that Cameron and Ged produce. And yet with the first Duppy Gun release that would come out in November of that year, they were able to achieve it nearly seamlessly. Distributed through Stones Throw, the 12-inch features singles with Jamaican artists Dayone and Early One. The tracks drip with psychedelia, layers of dub oozing out from beneath the reverberated reggae vocal stylings. It’s a futuristic take on the traditional roots vibe, an unlikely fusion of two disparate genres in a manner that feels positively natural.

In January of 2012, Cameron and Ged booked another trip to Jamaica. They’d been back on the island briefly in 2011 to present the Congos with the finished record, but hadn’t been able to do any recording there since their initial visit. This time they came prepared, armed with a dozen or so riddims they had created with the help of a few different American producers that they’d enlisted to work on the forthcoming Duppy Gun releases. Still, the uncertainty of the first trip remained. There was no concrete plan, no real framework as to how the recording would operate.

“The idea was really to go down there and see what unfolds,” Ged says.

He and Cameron knew that they wanted to collaborate with the sorts of underground musicians they’d met the year before, but there was no precedence for what those processes might look like. They were venturing into uncharted territory and the possibilities seemed endless. New doors opened at every conceivable turn as they expanded on their contacts from the previous trip, easing their way ever deeper into various underground circles.

“Everybody sings and everybody sort of has the casual experience of being a musician,” Ged says. “In that it’s a thing that people do; they get together and sing songs.”

Cameron adds, “So almost all these dudes have notebooks, just like full of songs. And they have three or four songs that they're just working on at all times.”

The entire project was an experiment in the process of trial and error, of trying, failing and realizing a way to move forward.

“That was what we learned making that record,” Ged explains, “That there's always a way, you just have to find your way around it.”

Running on a tight budget, they’d opted to cut out the cost of booking time at a recording studio. Instead they brought along a mobile studio, travelling with a laptop, an interface, a microphone, and headphones. They purchased a 100-foot extension cord and recorded wherever they could, setting up in bars, in the foundations of half-built houses and in the jungle.

“That actually ended up opening this up to some really interesting possibilities,” Ged says. “All of a sudden we could kind of record anywhere that was within 75 or 100 feet of power.”

Electricity had become a sparse commodity in parts of the island in recent years. Although most households across Jamaica did have electrical access, high energy costs had coincided with rising unemployment rates to make it unaffordable for many of those living the poorer neighborhoods that Cameron and Ged worked within. Access to power in these communities was pretty limited, most structures lacking any electrical capability. With the extension cord, they were able to maintain a degree of flexibility, seeking out the musicians they wanted to collaborate with and bringing the studio to them.

The pair delved deep into the network of musicians, meeting countless people and finding vocalists who were able to connect with the tracks they’d brought along. They exercised a strong curatorial hand, but there was no denying the significant role that spontaneity and chance played within the structure the project had begun to gravitate towards.

”It was nice, the way that certain tracks ended up finding their way naturally to certain artists, because it felt very [organic],” Cameron tells me.

“We’d be playing them the tracks that we wanted them to do,” Ged adds. “So one guy would be listening to a track and then other guy would say, ‘Let me hear that,’ and he’d grab the headphones and be like, ‘I want to go on this track.’”

Many of the vocalists that they worked with were hearing the tracks for the first time just as they were about to record, pulling from their repertoire of lyrics and working them to the rhythm on the spot.

“It's like they write these songs, but they’re so malleable that they can bring it to whatever their confronted with, [whether] it’s a YouTube rhythm or like a 128MB mp3 on a Blackberry blasting in this shack and they’re singing to that.” Cameron says, describing the process. “But then you bring your beat [to them] and they start singing their song over your beat and they form a relationship with it.”

It’s an intersection of music and culture that has only recently become possible as technology makes its way across on the island. The digitization of music production has allowed for a reworking of the dancehall traditions and techniques in a way that is in continual flux.

“What's most interesting to [us] is the way they're interpreting this music because we are looking at it through a totally different lens and their point of view on it is going to be way more revealing,” Ged explains. “I just don't expect people to understand just on the face of it. Like what it is. I think because it's coming from a different culture. I want the music to not just be for reggae heads or dance hall heads or Jamaica heads…”

“Or,” Cameron chimes, “Not just for American people, like American underground music fans. We're really trying to put something in a different place, or just put it out where it's supposed to be, whatever that means.”

As outsiders to the local music community, Cameron and Ged were constantly learning how to navigate their way through its unfamiliar landscape.

“They're doing this on faith,” Cameron says, “Because when they met us they got a vibe from us and that's what's been able to transcend all this stuff. In the end we connect in a certain way with these guys as grounded individuals.”

The fact that they’d worked with the Congos certainly didn’t hurt either. As longstanding pillars within the Rasta community they commanded a certain level of respect amongst their peers that transferred over in a way. They’d brought Cameron and Ged in and vouched for them, their word alone bestowing the pair with a sort of repute within the community from the get go.

Nevertheless, it was a fine line to walk. As Americans travelling to the third world, there was a certain stigma that they needed to work around. Incidences of white-exploitation on the island had taken place in the not-so-distant past and so Cameron and Ged wanted to ensure that their efforts wouldn’t be interpreted in that way. They had drawn up contracts for the artists to sign, hoping to keep everyone’s expectations in check and prevent any misunderstandings from taking place. The paperwork outlined costs, royalties and payment agreements, explaining exactly where the money was going and why no one was making any yet.

Throughout the project, Cameron and Ged brought the tracks up front, making provisions to pay the artists royalties if they should materialize later on.

“It's been a weird negotiation between these two very independent ways of putting out music.” Cameron explained. “Like the way that club music and dancehall stuff goes in Jamaica and they way any sort of underground music goes in America, its sort of similar. But there’s an interesting translation that happens there where there's some sort of understanding [that] needs to be constantly interpreted and reciprocated.”

“Because obviously nobodies making money off of this,” Ged adds. “But it's a good-faith effort to sort of spread this message and this music to places that it wouldn't get to normally. And also to connect what we see as two very similar strains of experimental music out here.”

For further insight into M. Geddes and Sun Araw's Duppy Gun adventures in Jamaica, check out the video below featuring collaborations with G Sudden and Bookfa.