My Dinner with Hunx 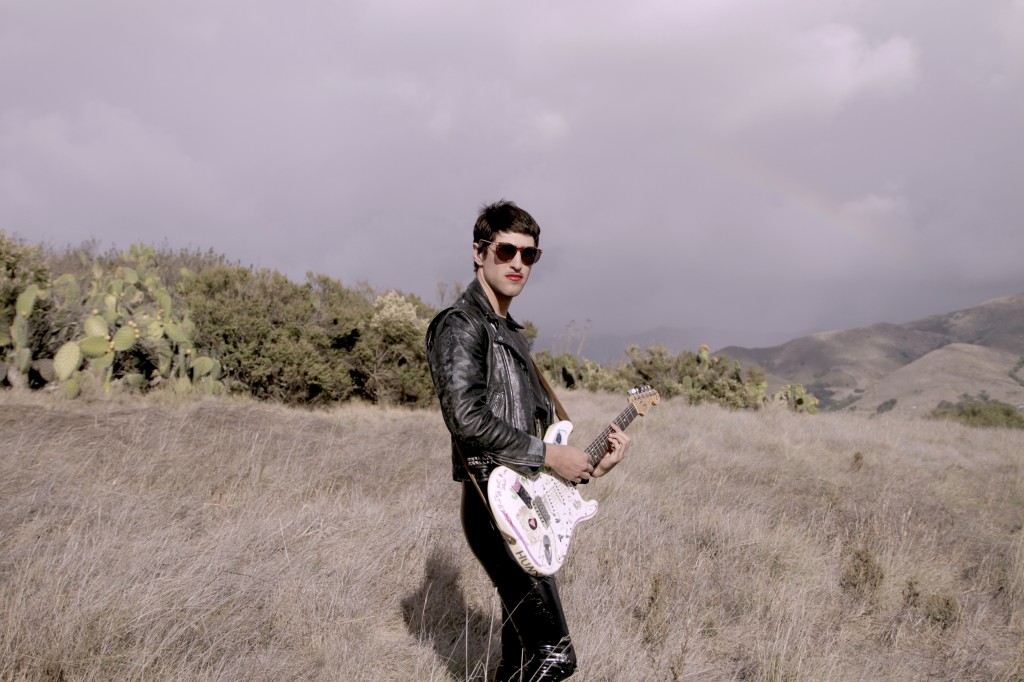 Hunx, aka Seth Bogart, released a solo album on Hardly Art called Hairdresser Blues that finds him both rocking out and engaging the sentimental in a much more free fashion than previous efforts. We met up at this new vegeterian joint called Source in SF where SOMA converges into the interior design district at the foot of Potrero Hill.

Sporting fresh trimmed black hair with leopard spots of blonde highlights, midnight black denim, and black leather motorcycle jacket with Bikini Kill pin, Seth and I met up and mulled over the menu. The truffle macaroni and cheese caught my attention before I began to express my misgivings over eating heavy dairy and carbs so late in the evening.

I’ve heard that Courtney Love has also claimed that Kurt’s death was over his consumption of fatty foods.

After our random pop culture idling we placed our orders for veggie sandwiches and grabbed a table. We started talking about the span of Mr. Bogart’s career, when his earlier band Gravy Train!!!! served up irreverent ghetto tech beats. They were gay-friendly with over-sexed attitudes and what some might call proto-Das Racist stream of conscious flows. All this happened in the wake of the Bay Area’s dot com meltdown, when the music trends turned toward electroclash, as the garage rockers were given keyboards and beat machines. While Seth insists G. Train!!!! had little to do with that movement, he was a fan of the scene regardless.

I loved Erase Eratta though.

I dug that album with the insects on the cover.

How about those other local electro-clashers Numbers?

I never got them, they were just too…boring.

Being anything but boring, Gravy Train!! shows were events that involved the audience to not only sing along to classics like “You Made Me Gay,” “Titties Bounce,” “Gutter Butter” to the more refined dance tunes from the latter release All the Sweet Stuff. Looking forward, we moved on to the subject of Hunx’s solo evolution.

How do you feel about the songs Hunx, sans Punx?

I felt that I had these songs that didn’t exactly fit as a Hunx & His Punx songs, where there is more of that Ronnettes thing happening and this was something that was more personal than the material with the Punx.

I guess you could say that, there is a lot of that '50s style in what I do with the Punx.

And I get the impression on this outing you are actually trying your hand at more conventional singing!

Oh yeah, ha ha, well I had always sang at that shouting octave and when Nobunny came to me and was like, ‘Hey I need a girl singer for my band and I don’t want to go asking girls at a high school and looking like a total creep.’ So I had always taken that girl group approach to styling my voice.

But that singing approach has had an impact, listen to Chris Owens’ screech and wail on “Lust for Life” [impersonates Owens high pitch squeal of “I wish I had a loving man in my life…I wish I had a pizza and a bottle of wine”]

Ha ha! I don’t know if I would go that far, he’s got his own sound working for him.

Hairdresser Blues does showcase a certain Hunx vocal style like on “Let Me In” and on the chorus of “Always Forever” that you have patented over the years.

I love that song too, ha, that’s great that you think of it as my style,

And then on your Bay City Rollers tribute “Do You Remember Being a Roller” you come off sounds like glam icon Brett Smiley.

Ha, cool, I do like Bretty Smiley! Do you remember that band School Girls that we used to play with?

I do, I remember them doing a cover of Hello’s “Another School Day” live.

Yes! They were into a lot of those really old school glam rock artists like, have you heard that Glitterbest compilation that has this kid Ricky Wilde?

Kim Wilde’s brother, he does that “I Am an Astronaut” song.

Kim Wilde’s Kids in America album was one of my favorites in high school. But yeah, I have always wanted to write songs like [Kim and Ricky Wilde] for other kids to sing.

So you’re not going to SXSW this year?

Thank god no. Last year at the end of doing 5 shows a day I was in tears. It’s too much and then there is that whole getting your gear from one spot to the next where you’re lugging everything on foot across town.

And I take it you don’t do the Bruise Cruise?

No, but Shannon [Shaw of Shannon and the Clams and Punx bassist] plays that festival. I really want her to make it, I really hope she gets the attention that she deserves.

Our conversation turned toward the pursuit of fame, the off the record perils of being a buzz artist and tours spent with Smith Westerns, Best Coast and Wavves.

We toured with Smith Westerns and they would just all sit there, arms folded, looking uninterested and I was like, 'You guys should be out, having fun! You’re all on tour have a good time!' And they were just all, ‘We just wanna be famous.’ So we were just like, 'Okay, fine.'

How do you feel about the wave of success that Kreayshawn has discovered?

It’s so crazy, I’m very happy for her. I’ve known her and mom for so long now, I used to cut Kreayshawn’s hair back when she was a teenager! And her mom Elka [Zolot] was in the Trashwomen and Tina [Luchessi, drummer for the Trashwomen] runs Down on Lulus. I’m not so much down for her friend V-Nasty who says the n-word and all that but with Kreayshawn she’s like the girl you know from the neighborhood who gets really popular and you just really want her to do well out there.

After discussing the East Bay swag momentum, alternative salon stylist culture, Hairdresser Blues and all, Hunx returned to his thoughts and feelings on Gravy Train!!!!.

You know for so long I couldn’t listen to any of those records but now when I put on Hello Doctor I think about all those crazy shows just getting out of control, having so much fun and how much the fans got into it, dancing on stage at the shows and filling those small venues.

Seth became reflective, looking back on a decade’s worth of performances, enthusiastic audience responses and the intrigue of the future.

I just wonder where will this all go,you know? What we all make from this? Will we make something of ourselves from these efforts?

And from what we heard, Hunx & His Punx played a killer show the other night at Bottom of the Hill for Burger Boogaloo with Nobunny, Shannon & the Clams and Heavy Cream. Hairdresser Blues is out now on Hardly Art.