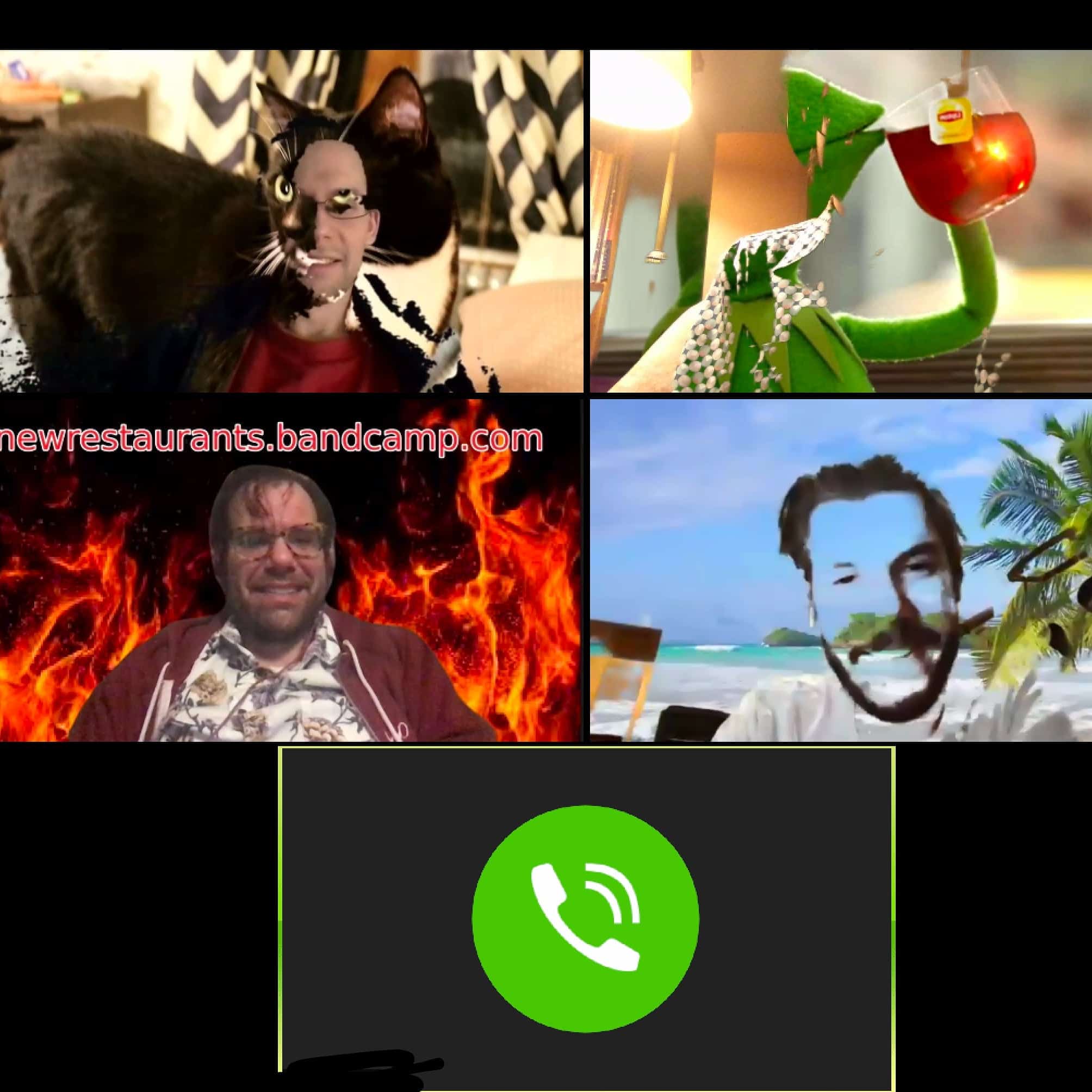 And you may find yourself sitting in a regional chain restaurant in midtown Manhattan. And you find yourself slurping down a frozen margarita with a tequila shooter that was advertised as Patron but is decidedly not Patron.

And you may ask yourself, well, why am I here?

Inspired by a they-said, they-said incident at the 23rd St. location of the mystifyingly not-yet-dead-due-COVID Dallas BBQ, rockers The New Restaurants examine the mind-boggling aspects of trying to parse events you weren’t present for over social media. Today, Impose is happy to premiere their new single, “Fuck Dallas BBQ,” which leads off of their forthcoming album, Wrong Place at Wrong Time, due via Totally Real Records on September 4th.

The track is a delectable mixture of fuzz and jangle-pop as The New Restaurants find the nuances in a “both-sides” world. Certainly more meat on the bone than the dry ass meat you’ll find at, well…

Listen to The New Restaurants’ “Fuck Dallas BBQ” and stick around for an interview with the band. Look for the single out wherever you listen here.

Hi, The New Restaurants! Thanks for sharing your new single with us. Can you tell us more on who you are and how you first got into making music?

Beau: Hi, we’re The New Restaurants, four interchangeable white dudes [Beau (guitar, singing) – Doug (synth, singing) – Roger (bass) – Rich (drums)] who play in an indie rock band in Brooklyn. You may have heard some other bands we have played in over the years, such as Miniboone, Robot Princess, Pretty + Nice, Gunfight!…Many years ago, Doug and I stood in the front yard at Fort Useless (RIP), listening to a pretty sick set by Howth through the walls, and decided that the world needed a fake band that released websites instead of albums. After releasing two 8-song websites, we did a 180 and morphed into a real band called The New Restaurants who are releasing an album. Ironically, the album will only be available on a website.

Doug: I’m sure we all got into music for the reason that everyone gets into making music – a love of drink tickets – but the reason we started making music together had more to do with wanting to do something that didn’t have the same baggage that all of our other bands did at the time. Going farther back, I personally first got into making music singing in a boys choir at church. Go figure!

Rich: Doug approached me and asked if I wanted to play drums in a sort of “supergroup” of people from different bands we all knew and that maybe we would be playing slowcore versions of Taylor Swift songs. But it turned out Beau and Doug were actually working on original songs with this minimalist approach to songwriting and it sounded cool in a way that no one else was doing. I was totally into it. And the Taylor Swift thing did happen for a short time later.

The New Restaurants has existed in various formats over the years, what influenced your decision to move forward in this current representation of the group?

Beau: The New Restaurants started as more of a nebulous concept than a band. Roger and Rich joined the band in order to help us bring some of the early songs to life on stage, but we very quickly and very predictably evolved into something much stronger than that early version. after five years or so of playing together, we decided to finally record some of our songs with this full lineup.

Doug: Even though the music for our first two websites were recorded just by me and Beau with drum machines and studio magic, we’ve actually been playing together as a four piece since right around when we put out that first website. The band is definitely more about the four of us than it was ever about just me and Beau, so it felt like the only natural thing to do to have this record reflect that.

Rich: This record is the first where Roger and I kind of helped build and arrange some of the songs. I like to think that even our fully produced sound as a band owes its structure and aesthetic to those early drum machine recordings.

“Fuck Dallas BBQ” reads as a timely examination of how our fractured inner perceptions of the outside world can combine to explode in slight provocations. Is that an overarching theme on the record?

Doug: First of all, excellent reading of our song, “Fuck Dallas BBQ”. I think you nailed at least one of the things that are going on in there. If this record has an overarching theme then that’s a happy accident, but happy accidents are sort of at the heart of how the band works. The four of us are pretty solidly on the same page about the absurdity of life these days – we talk a lot about memes and politics and weed and The Masked Singer – and I think that the record reflects, if anything, our shared love-hate relationship with the whole American thing. Part of that is, as you said, a recognition of the degree to which fractured inner perceptions seem to result in catastrophic real world consequences these days more than ever, but part of it is also shitty architecture, and part of it is also Charles Grodin.

What’s your songwriting process like? Who are some of your biggest influences?

Beau: We usually write an “a” section and then a “b” section and then arrange them in some kind of arbitrary order. Occasionally there’s a bridge but we mostly moved away from that. Then we listen to it for three hours on loop while trying to visualize what the lyrics should be. Our influences are mainly like Windows 95 and Jim Morrison.

Any new NY-based artists you could turn our readers onto?

Doug: No! … Just kidding. It seems strange to plug your friends’ bands when nobody is playing live these days but before COVID hit I was very excited to be doing more shows with Monster Furniture. We played with them in February and they were great – a rare band that can do the indie rock thing without making it just about volume and fury and all of that. I’ve also been listening to Gabriel Birnbaum’s record from earlier this year a lot, and also Gemma – folks who I am blessed to be able to say I once shared stages with in a former life.

Beau: It’s been a little while since I’ve seen a show, but I will never stop telling people to listen to The Royal They, who do indie rock volume and fury better than anyone I’ve seen in a long time. Also a general shout out to Jam Eater Records who are doing yeoman’s work in being contagiously passionate and loud about rock music in 2020. Is it gauche to plug Totally Real Records, whose mission statement is completely inspiring, and Mount Sharp, who just blew me away with a record that I’d been anticipating for years?

PrevPreviousForward Motion: Q&A with The Only Ocean
NextDouble Trouble: Q&A with Body DoubleNext