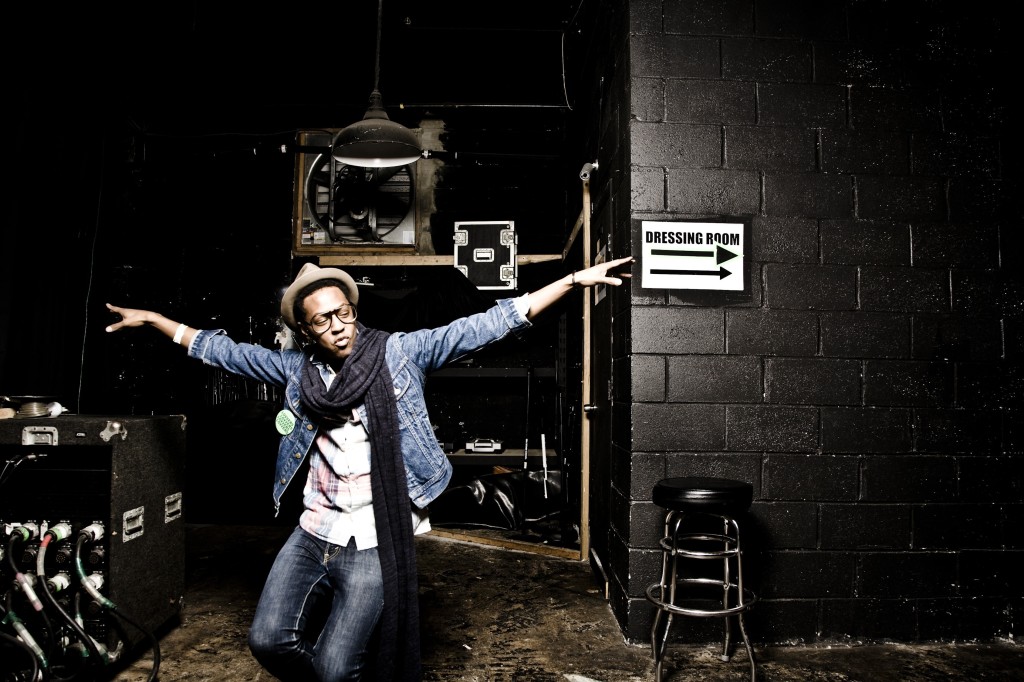 It’s been five years since Spank Rock, a.k.a. Naeem Juwan dropped Yoyoyoyoyo, a party album of scattered styles for people of discerning tastes with little tolerance for the frivolities of cheaper mash-ups in popular culture. Flash forward to half a decade later, Naeem is set to release his long awaited second album, Everything is Boring and Everyone is a Fucking Liar September 27 on his personal imprint, Bad Blood Records. He's enlisted a cast of characters that includes Boys Noize, Crystal Castles, Death Set, Diplo, Pharrell, Sam Spiegelo, Santigold and XXXChange. Intrigued by the album title and krautrock beat of “Energy”, we wanted to know more, so I called Naeem up in between studio schedules.

Describe the energy that drives the new single, “Energy.”

It’s funny that you ask that because I just got off the phone with my mom and she told me that new single is “half-assed.”

And so I’m kind of like dealing with that (laughs), all day today you know!

Was your mom looking for some more electronic, I don’t know, gadgets or doodads in it or what?

Ha ha, you know we have a lot of conversations all the time about music and trends and about being an artist and she was said that she doesn’t feel like it was up to par with what I was trying to achieve and stuff but it’s interesting, ha ha! But even when I wrote the song I think I was going for something that is like a commentary on the music making process like creating this album it was all about starting from scratch and making something that had to do with today you know. So I think that was like one of those things where it’s a song that is sampled from Can’s “Vitamin C” and even though it’s a song I absoltuely love, and it’s a perfect dance song in my eyes, it’s weird that I’m singing about something and relying on a replay and it’s not something I set out to do so in a way… I’m kind of understand what my mom was saying now but, ha ha, it’s all good, even though it’s a bit contradicting — the lyrics and definitely the passion are about trying to find like a spirituality in music instead of making music to sound cool, you know.

There’s definitely a more organic approach on “Energy”. Can we expect more of an organic approach to instrumentation on the upcoming album Everything is Boring and Everyone Is a Fucking Liar?

Ha ha ha, yup! Um, you know what, again we got Boyz Noize doing production and bringing the beats and that’s what [Alex] does, so there’s definitely going to be that element of techno and a whole lot of other stuff.

What influenced the album title?

A friend of mine who designed my web site was hanging out with me and was saying stuff and he was like what about rebellion songs from the underground scene? And I said “everything is boring and everyone is a liar’. And he got such a kick out of that, he was like, ‘yo, you should name your album that!’ And that would be pretty funny that it comes from thinking about regular music it had kind of taken on a different meaning.

Yeah, well I know so many folks that look at the whole pop spectrum of pop from what they hear on Hot 94.7 or KMEL and they’re like this is monotonous, it all sounds like one big Drake track. I think the frustration or complacency is a common sentiment.

You know it’s kind of weird but it’s like, I’m that way, heh heh, you know what I I mean? I’ll hear a track and think man that I would love to change up that intro and it would be perfect!

You’re a man of so many styles and if you could settle on one or one genre, what would you embrace and why?

Man, that’s what music is for me, because a lot of the time I want to try everything, but then I can’t sing or play music, heh, I can only rap. So I have all these different influences for almost everything that comes out, and in fucked up ways; I just want to put everything in one bag and let it all come out in it’s own way. I don’t know what the deal is with me, heh heh, it’s like right now I would probably deep down in my heart love to be a songwriter for the next few albums

Can we expect anything next up for your Mobroder alter ego?

Ha ha, I hope so I love Mobroder man!

Me too, it cracks me up.

That Mobroder came about when I was hanging out in some pool at this hotel with this fake moustache and I had it on and I was in the pool with and it and I was trying to keep it on and my friend goes, “Man you look like a black Giorgio Moroder!” And it became an inside joke and this whole 80s concept just like that it turned to a couple of songs, a mixtape, the character. But it wasn’t until we shot the video where I was like oh shit, Mobroder is alive! You know, like that’s it, I always want to go back and put out another disc!

And that’s what got you to collide together Italo Disco and Sir Mixalot ala Giorgio Moroder?

Heh heh, yeah yeah, I guess it was something that could only makes sense with Giorgtio Moroder playing, sitting in a hot tub and my mustache and everything.

How was it working with Santigold on the new album?

Working with Santi was super exciting, she always has skillful advice and she has been writing songs since back in the day and being able to be around her and watch her write it really it makes me stronger and the song that she wrote is amazing, it’s one of the best songs on the album. It may not be my favorite, ha ha, but definitely it’s one of the best songs on the album! We talk often, we video chat and I think we both like a lot of pop and actually being able to create that is a hard thing to balance and to be put into that kind of creative environment we just pull each other in a lot of different directions.

Can we expect any future collaboration with you and Diplo?

Diplo man, you know it’s funny, the only thing he ever produced was a remix for “Put That Pussy On Me” but we never have worked together or anything. I think pretty much once this album is out I should say hey, this is something that should have happened a while ago! But I don’t know, everyone’s life gets pulled in different directions and influences and stuff. Maybe collaboration hasn’t happened yet but maybe it’s time to start something.

How did you get dialed in with the Death Set? I know they did some instrumentation on that “Energy” single.

Yeah, yeah. I think you know what, one thing that people don’t understand about me is how really, really down I am and tapped into these different cultures around me and the Death Set and I have been doing shows since back in Baltimore for the past seven years. It wasn’t like I saw them playing and I want to get them on the record! Naw it’s like me working with friends and that’s between us, they’re all people that I can play with in any situation. And yeah know, I’m stoked for that and I think maybe to be able to put stuff together and work together we keep pretty close.

What’s Pharrel up to these days?

With Pharrel? Ha ha, last time I was in the studio with Pharrell…heh heh, I really can’t answer that question, I have no idea what Pharrell is up to but I ‘m really happy that we have started to have a work relationship, he is someone I have always looked up to and is one of the real people in hip-hop. I think his taste and talent in music goes far beyond a lot of pop producers, I almost feel uncomfortable opening up to him (laughs)! But yeah I mean he is one of those people who will go down in music history and should be respected always.

Yeah, Pharrell and the Neptunes are world class. I was wondering what your thoughts were on the current dub step craze?

With dubstep it’s one of the few new sounds around, I was reading this music journalist Simon Reynolds who has a book out now called Retromania: (Pop Culture's Addiction to its Own Past) and he talks a lot about how our culture is so obsessed with recreating themes of the past like with dub step, a lot of the music from the UK pulls from a lot of different things, a lot of my influences have come from the UK since I finished Yoyoyoyoyo and I wish more American artists would tap into that mentality in wanting to create such songs, but yeah I like going to dub step shows and I just appreciate the creation of anything new but, yo um, my manager is freaking out at me over here!

No worries, thanks for your time, love Yoyoyoyoyo, looking forward to the new album this September.

Thank you so much again for all the interest!