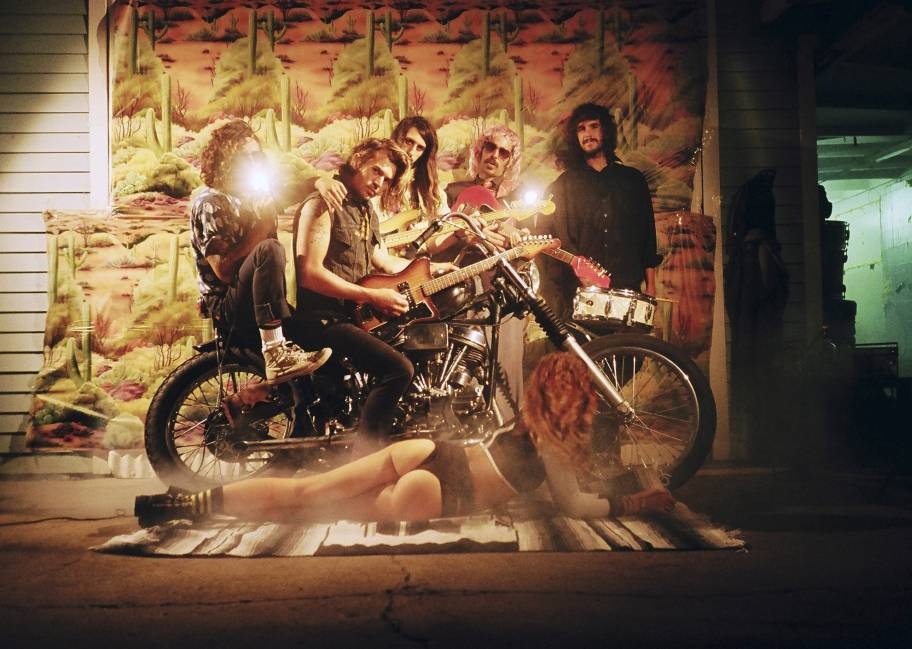 The Growlers make the kind of music that makes you feel good, even if the topics get heavy and personal in a far out kind of way. Lead by the laidback surf loving brotherhood brought about by Brooks Nielsen, we talked for a bit about the winding road that brought them to their home by the beach and the sweet surf of Costa Mesa, California. From discussions of Burger Records boogaloos and their growing Everloving Records catalog of classics like Hot Tropics, Are You In Or Out?, Hung At Heart to the new EPs Gilded Pleasures/Not. Psych!, and an upcoming December 27-29 residency at LA's The Echo that Nielsen describes as; “Bringin’ some intimacy back to [our] shows by ditching the the big stage and playing in the ring at floor level. Gather around and watch at any angle the psychedelic strangle. Come see the spit fly and the chicks cry.” And right now, Brooks takes us back to the group’s formidable beginnings and their exciting road ahead.

It felt to me like there was more of an Americana vibe on the Are You In Or Out?, to the new sonic distances and haunted dissonance on Hung at Heart. What do you feel accounted for these developments and shifts for you and the band?

First off, 3 years is a long time, Are You In Or Out? was really a mix CD of recordings we have made, we had 13 songs and we were playing shows around LA, Orange county and I was like what the hell are we doing? When we first hit the ground we were kind of like, are we a band? So we were recording an album, and then we decided to be a band, just having fun, getting drunk and hanging around the house. And then after 3 months and getting older and got more certain about what we were doing, and more confidant, that we’re actually songwriting.

The surf rock comes out stronger in the second album, what lead to these styles and such?

Trying to pull it off, trying to be a band, trying everything, by the time we got to Hung At Heart it felt natural, everyone playing what they wanted to play and that laid back casual, style and there was no way that our surf lifestyle couldn’t be involved. The fact that we like simple beats, and as far as listening, we are all writing in this band, there was a time when I got so busy that I wasn’t listening and was just working, the other guys listen more than me, we had friends that were on the road and were touring and you get to know them and work with them so long that, not just listening but trying to make music.

For you is listening to other artists while writing and working inhibiting at all?

Yeah, I don’t think it’s inhibited me at all, it’s only helped me, I know some bands do the opposite; they find something they like and go into the studio and record it. I stay away from stuff, I still read a lot, so that comes in, but yeah I don’t listen to very much music, and that’s the way I work the whole time, just a troubadour and just getting the feeling for the song.

Like the infatuation described in “Use Me For Your Eggs”, what crazed obsession has over swept you guys as of late?

I don’t know, we’re on the road so much and being home, and having a home now, we were homeless for a minute, we just decided to take off on the road and now that I have a spot I don’t want to leave, just want to party, I got a bar, a workshop, and a studio, chickens and everything, it’s kind of like a commune. Everything works here.

That far off at sea organ really drills and permeates your consciousness even after you listen to the album. What kind of organ-keyboard set up is it, and how did it become such a powerful-focal instrument on the new album?

It’s all Matt, Kyle or me, it becomes simplified and becomes a singing instrument instead of knowing what chords and scales, we use a B-3 Hammond, some Farfisas, and a Echoplexes and space echoes, when it goes through all the gear it sounds very ghostly and amazing.

That’s the beefiest there is, we just play it a lot!

I know you guys get a lot of those California sound comments but there is almost that taunt of timeless Americana haunt you find in Bay Area bands, like the spirited styles from The Blank Tapes, Exray's, Fresh & Onlys, The Mantles, Sonny and the Sunsets, and so on. Are you guys close to the Bay or any artists within those eclectic-collective circles?

Not really, when we first became a band we never knew about any bands. When Matt [Taylor] came over, he was like, ‘you got to check out this surf shit in Laguna’, it was a dead city. Then these guys Ty Segall, the Traditional Fools, those guys are garage and we just have shittier equipment. We just took it, there’s that part of it, we know these people now, we’re friends with Shannon and the Clams, but we’re so far away from everyone, we’re isolated in this little Orange County spot, I don’t want to say ‘behind the Orange curtain cause that sounds brutal, we’re not going off to clubs and watching bands all the time, we’re just at home, surfing and writing. There’s nothing else going on down here, we’re just detached, everybody wants to put us in a category, everybody wants to put us into the surf scene, but we’re not really a part of it, we’re just an old spirit of not feeling guilty about being Americans, we still enjoy our freedom, and doing the best we can.

The band has been self-described in the past as a family. Do you see yourselves like a collective, reminiscent of The Source Family?

We consistently get the 60s band, the only way we can function is through work ethic, and if they’re not there when we need them then they’re out of the picture. It’s not really commune style, someone is always making something, someone is making a table, everyone is just doing their own thing, I don’t want to be associated with the hippy commune thing, we’re just doing it as a survival thing, we live in a spot where we can record, and work because it’s practical.

With that family dynamic and frame, are “Burden Of the Captain” and “Row” indicative of the role and adventures from a patriarchal perspective?

Yeah, I think so, we always try to be original, it’s nice when people can’t categorize your music, I’ve never felt like a dad in this band and I just want everyone to put their best in and just make it easy enough to work.

“Beach Rats” and “Salt on a Slug” deal with some friends going through heavy times. What is the Growlers key advice on keeping vibes posi and quasi-healthy?

My ultimate advice is if you’re not happy, pretend you’re happy, because you’re bumming out people around you, and you suck. Because we’re all partying, and some people are doing drugs and they can’t handle it, take care of yourself, force yourself to be happy and be well, and when everyone starts getting bummed out shitty things starts happening and we don’t need that. Happiness is more of your obligation to everyone around you.

There is almost a crystallizing process of “Living in a Memory” where the mood and progression stirs feeling of a moment caught in time. How do you capture those feelings about former loves and translate that into the music?

That’s what I hear when I hear it, I hear the song and that’s what first hits me and I take that thought and then run with it. And I think that’s an easy one, you take a memory that you want to hold on to, and you have to move on, many friends they fall in love with one chick, and It has a serious emotional vibe to it and I wanted to explore it.

Strategies for closing out summer 2013? Game-plans?

First we’re going to enjoy ourselves here , we’re always travelling, so we’re going to take advantage of the waves and the weather, we just made a record for England, and a record the US, and we’re in the process of a writing another one right now. We’re about to on tour with a bunch of Burger [Records] bands, so when we get back from tour we’re going to pop out another one.

So you’ve just recorded the follow up to Hung At Heart?

Yeah, we had a few weeks to pop out a record, and we had 12 songs and we whittled it down to 8, it’s well played and soulful so we’re going to get that out there (in September) we’re touring with The UK one is Not. Psych! It’s funny cause we’ve been called psych for so long but you can’t really categorize it, and the US [EP] we called Gilded Pleasures, paint it gold and basically the same record, one just has a few more songs on it. We got stuck for a while, it took us 2 years to complete a record and the industry really stops you from doing that, I just want to put out as much material as I can.

What ways have you found the industry to be hindering creativity?

They want to invest in you, and make money, sometimes it takes too long, you want to shop around, but I just want to get it out there, we got it down now.

Thoughts on folks applying the tagline, ‘beach goth’ on you all?

It’s started so early on, it’s like fuck, we don’t want to say anything, and I was like well, ‘we write dark songs, we surf’, I guess we’ll take it!

The Growlers' Gilded Pleasures EP will be avaiable November 12 from Everloving Records, while their UK release Not. Psych! is out now on FatCat Records.