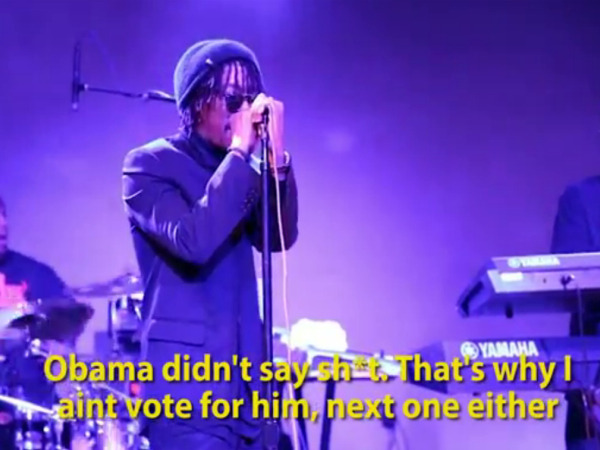 This past week, which saw the President re-take his office, was one of both celebration and protest in the hip-hop world. On the celebratory side, Jay-Z and Beyonce had literally the best seats in the house at the Inauguration. On a different end of the political spectrum, Lupe Fiasco chose to work from outside the system — and, shortly after he began performing, outside the venue as well. While Jay is our all-time number one rapper (and, truth be told, we wouldn't turn down those seats, either) our hearts are with Lupe on this one. Below, the lines of the week:

5. “I had to cheat the upper class/'Cause I'm done with all that suffering like succotash” — Action Bronson, 'It's Raw' lyrics
Any rap that references old cartoon characters pretty much has us at jump — word to “Daffy Wuz A Black Man”. Action working Sylvester's famous catchphrase into a simile really made us smile, despite the fact that the line doesn't really make much sense.

4. “My re-up is a ki up/You don't like the way I handle the rock, then nigga, D up” — Fred The Godson, 'Big Sundays Freestyle' lyrics
This is a pretty simple pun on “rock,” as in crack rock and slang for a basketball. But it's so well-constructed and surprising that it transcends the simple double meaning and sounds far more impressive than its individual parts would indicate.

3. “Your boobie know I'm harder than the bench seats/You couldn't move me with a Martin Luther King speech” — JR Writer, 'Full Clip' lyrics
Since this past week brought us MLK day, we had to include Writer's nod to the greatest of American heroes. His punchline is both funny and also a reminder of exactly how important — and moving — King's speeches are.

2. “Never tripping off the past, I would rather never mind 'em/'Cause only fools trip over something that be behind 'em” — Fabolous, 'She Don't Put It Down (Remix)' lyrics
Fabolous is one of the best punchline rappers working today. Every so often, as here, he uses his powers in the service of something bigger and more philosophical. The intricate plays on falling down also work as great advice on pushing forward despite tough times in the past.

1. “I'm outside of me, watching my body embody God body 'til the inside of me thinks quicker/Than the outside of me pops Mollys and drinks liquor” — Royce Da 5'9″, 'Tell Me To My Face' lyrics
In the most overwhelming what-the-hell-did-he-just-say moment of the week, Royce bowls us over with his lightning quick wordplay on this rhyme. It really should be heard to experience the full impact. The variations of “body” run at you, and then the drug joke at the end knocks you down.