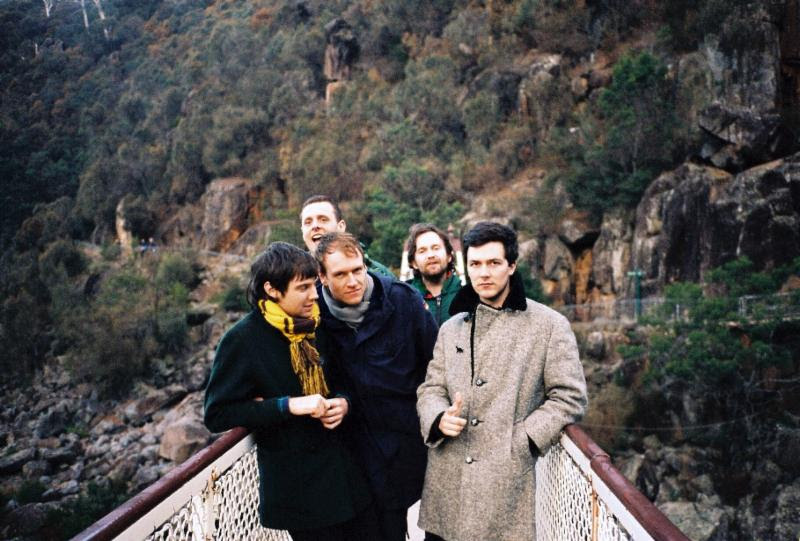 Initially, Daniel Stewart is the person you imagine he would be. The frontman of Australian band Total Control, Stewart towers over you, easily reaching 6’3” with broad shoulders and a sharp gaze. He radiates intensity. It matches the man pictured singing on Typical System, Total Control’s last album, a collection of tense and bleak post-punk that managed to touch on everything from dark new wave to krautrock informed sprawls.

Talking with him, though, Stewart reveals himself to be quite reserved. He speaks only a little louder than a whisper. The most animated he becomes during our interview is when he hears a Black Sabbath song playing in the distance. Every answer he gives is thoroughly thoughtful; he pauses frequently to consider every answer.

Stewart is the type of person that you want to talk to for hours, picking his brain to hear his response on every given subject. While I had his attention, we discussed lyrical clarity, critical and creative approaches to making art, and the band’s relationship to growing popularity.

Around a year ago this time, when Typical System came out, you were stating there were definite plans not to tour, and there were hints of the band possibly coming to an end. What changed in that in between time?

Those ideas, they didn’t come from us, that was just the way people assume every band that doesn’t tour after their record has given up. We just couldn’t get around to touring at the time. It wasn’t like anything that drastic was happening, it just wasn’t going to work. A lot of that stuff got kind of inflated, but I guess that’s how these things work often.

So the band is functioning as it normally does?

Well, it’s not really a normal thing with this band as you can probably get from the way we’ve talked about in the past. Because everyone does other bands and everyone has other stuff going on and we’re not career driven kind of people, it just happens when we have had the time to do it. So that kind of means we operate in bursts and then it kind of slows down for a little while. So right now we’re in a burst and it’s good. We’ve been writing new songs and we have a twelve inch [record] almost ready to go.

Typical Systems was the first Total Control release to have the lyrics included with it. Did they mean something more important to you? In previous interviews you said that when you wrote the album, there was a rough patch or something dark about that moment in your life.

Pretty much all of Total Control lyrically has come out of those patches more than anything else. I think the reason that the lyrics got included with this one is that, I did like to have the idea of the song abstractly referenced in the lyric sheet. It kind of reached the end of that feeling. I mean I’ve always been happy with them, but in particular I kind of wanted to be a bit more explicitly clear what I was saying in songs. It can often feel like there’s a shift in approach like it’s got a lot of purpose behind it, but it was quite spontaneous.

Anything I’m doing, if I’m happy with it, it’s because there’s been a risk involved. Taking some step into the unknown.

You said you wanted to make the lyrics more explicitly clear on this release. Is that why the production a little brighter and sounds nicer?

No, I think we just became a bit more confident of what we were doing and had a better idea about…like the last record we had a lot of stuff we didn’t end up using and this one there were only a few songs, mainly the songs the ex-guitarist wrote, that we didn’t end up using. But we were a bit more focused on what was going on. The core of the band really knew what worked and what didn’t, so I think with that confidence came…I  mean it had been two years, Mikey [Young, the band’s guitarist] had been working on recording stuff in the meantime, so he had a better idea of what he wanted it to sound like. It wasn’t that we wanted to present ourselves in a particular way; it was just inevitable that would happen because we were just a much better band.

You put out a zine called Distort, where you interview artists/authors who interest you, and review records that come to you. Does analyzing artists, especially new artists and new ideas, in a critical manner affect how you make your own art?

Yeah definitely. That is something I’ve thought about a lot. I think it’s important to have a critical relationship with art. And I’m saying that generally: music, the visual arts, the movies. But ultimately when you go to make it, you have to allow yourself to make mistakes. If you’re too critical you don’t give yourself the freedom to fuck up. So I think yeah, in a lot of respects I came from a more critical perspective than a creative perspective when I first started doing things. There’s a lot of artists who develop from a critical perspective before they came creative, and I think there’s no one way of reaching this point or doing anything, but for me I have to get past a lot of ingrained [pause] limitations of the critical perspective. They became really clear after a while because I could see I wasn’t capable of risking much, I wasn’t capable of fucking up, and that’s the most rewarding part of doing anything. The fact you could really fuck up badly.

Oh just generally speaking. Anything I’m doing, if I’m happy with it, it’s because there’s been a risk involved. Taking some step into the unknown. And you can’t do that critically I think. You really have to free yourself from that. Does that make sense?

You use it as a platform as to what not to do.

Yeah! If you are a critical person you can use your critical perspective to limit your creative perspective because you are aware of other people’s values and other people’s problems, but ultimately that’s their shit to deal with and you need to the one that fucks up, you need to be the one that makes values. That happened with Distort and Total Control; every year I’m completely dissatisfied with what I’ve done in the previous year. Anything I do, I never really give myself much time to kind of pat myself on the back.

Are you an unconfident person?

No, not at all. I guess I don’t take myself that seriously, but I do take what I do seriously, and my creative work, I don’t lack confidence about that. I know that if I’m doing it, I’m devoting myself to it. I have to be good, I’m not going to waste myself. In that respect I’m definitely not unconfident.

You’ve also spoken recently about the importance of conversation and treating it almost like an art. How important is conversation and communication in Total Control because it has five to six people and is more of a collaborative project.

Well, any band I’m in, it’s the strength of people being able to talk to, criticize each other, receive criticism, and most importantly being able to laugh together. Being able to share a joyous experience. I think that’s the common experience for everything I do. When I use the word conversation, I think I really just mean a connection or exchange between two people. It’s the intimacy of being able to actually listen to what people say and being able to respond to it thoughtfully. There is a lot to say about moments in your life when a stranger, with a cigarette, at bus stop, when you’re having one at the same time, talking about something. There’s a lot to be said about moments like that can surprise you, disarm you, and make you feel like there is stuff worth living for; that you can learn, that you can experience.

I think it’s important to have a critical relationship with art. And I’m saying that generally: music, the visual arts, the movies. But ultimately when you go to make it, you have to allow yourself to make mistakes. If you’re too critical you don’t give yourself the freedom to fuck up.

This is a bit speculative, but there seems to be this tendency with Total Control to not desire popularity. With Typical System, you could have signed to a bigger label, you could have gone on a big tour. But you stayed with Iron Lung. You toured now, playing the cities you wanted to play. Are you and the band not interested in that sense of popularity?

Coming where we come from, all playing in bands that really work ourselves, manage the band ourselves, and try to stay in touch with every way the band operates, popularity is a vague thing that we don’t work towards or aspire towards. We want everyone in the world to hear our music, but we don’t really think we need to do much more to get there. We don’t think we should take shortcuts, and we’ve seen the way other bands operate when they do take those shortcuts, to try to enhance their popularity, and it just seems they’re often very miserable in the position they are in. Someone is telling them how to operate and where to go, and they’re answerable to those people because those people are experts in popularity. I think we’re experts in writing songs and playing them and having a good, strong, loving dynamic, so that’s what we focus on. So it’s not really speculative. You’re right, popularity is not really something we’re interested in. We definitely shy away from those experiences of mass appeal because I think ultimately our music is a difficult and dark experience, and I don’t think anyone can stumble into it without feeling to some extent alienated.