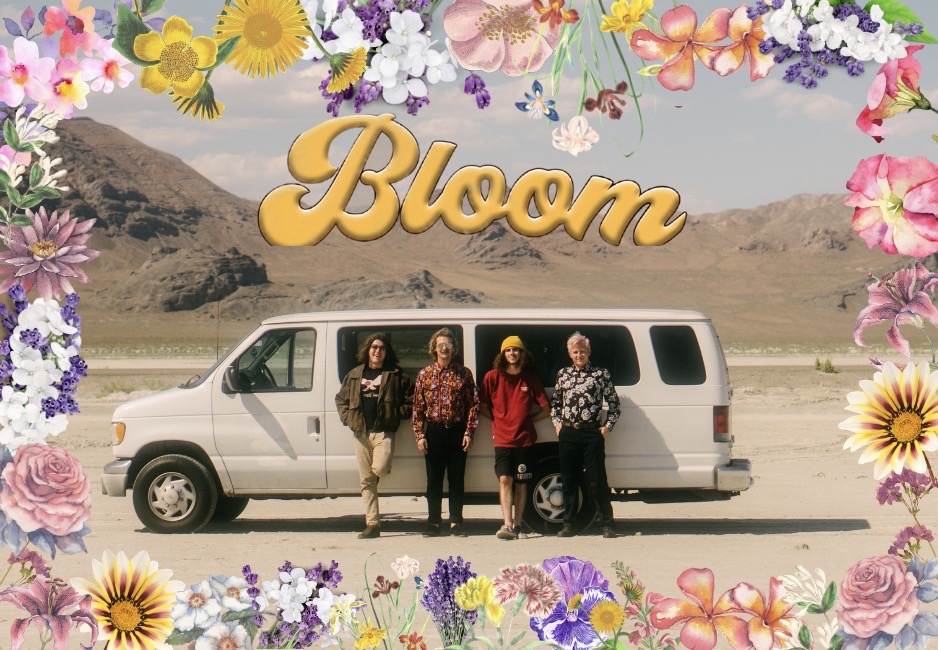 Last year was a big year for the San Francisco quartet Carpool Tunnel, but 2021 is about to be even bigger. In 2020, the group amassed over 780 thousand streams on Spotify, finished recording their first full-length album, and even ditched their infamous $400 van off Craigslist for a new one.

Akin to most modern-day Tinder love stories, the band met on Vampr, the music scene’s networking platform, and the rest is history. After holding onto their newest album Bloom for well over a year, Carpool Tunnel is ready to release the record at what feels like the perfect time. Spring is just around the corner, and after a year of monotony and solitude, it feels like things may finally be looking up.

“Has it really been a year?” the group asks on “Empty Faces,” a single that, ironically, was written before the start of the pandemic.

Carpool Tunnel’s uniquely Californian sound can be heard throughout their discography along with tinges of their diverse range of influences – like Durand Jones and the Indications, Bob Marley, and The Strokes. Passionate and youthful, Carpool Tunnel provides a new vehicle for the future of indie rock.

The band will release Bloom this Friday via Pure Noise Records (pre-order HERE), but for now you can listen to the album’s first three singles: “Empty Faces,” “Flora,” and “Dreaming Still.” Singer/guitarist Ben Koppenjan and guitarist Bradley Kearsley also sat down to discuss the making of the album, and you can read their thoughts below.

I feel like people our age are always sharing and posting what they are doing as they do it, In an interview, you talked about how you have had this record done since October 2019. How has that been holding onto something so anticipatory and huge for you guys?

BEN: Oh gosh, I mean it’s definitely been really really tough. We were originally planning on releasing it in April or May of last year, and we were pretty dead set on that, and then obviously we got thrown into this blender of COVID. I think all four of us are really excited to be releasing Bloom. We were even reading over some of the lyrics and it makes so much more sense now that we’re releasing it, we have lines like “has it really been a year” in “Empty Faces” and we wrote these songs without the intention of what they truly would mean now, which is really cool. I think that is the huge silver lining through it all, now that we’re releasing it all the songs make way more sense and I think it’s a lot more impactful than it would have been if we released it last year. We’re just really excited.

With that being said, the title of your very first album is ‘Bloom,’ and it is coming just in time for spring, and almost a full year after our lives became pretty monotonous. Have you felt a sense of distance or separation from the themes of the album since it was written before the pandemic, or assigned new meaning to ideas from the past, or does it still resonate with you?

BRAD: I don’t think we like to assign strict meanings to songs. It’s actually very special that the songs have adapted and changed into the times now because Bloom is all about growing into ourselves and changing as humans and learning from each other and from the band. Those songs are going to change as we change, and which ones we hold close to our hearts will change. The songs are still open-ended and reflect our previous lives as much as they reflect our lives now.

How would you say being from the Bay Area and San Francisco has influenced your sound and who you are as musicians?

BRAD: I really love San Francisco. The thing I love the most about San Francisco is how community-based it is. The music community is always supportive, the art scene is super collaborative, creative, and community-based, so that has affected how we run as a band day-to-day and our morals as a band and as people too. It’s one of the most inspiring cities to be in, just driving around Golden Gate Park, the colors everywhere, being right next to the beach cause we’re in the Sunset District. Even famous spots like the Golden Gate Bridge and Strawberry Hill and historic places like Haight street. It’s very easy to drive around, and walk around and feel inspired every day.

BEN: The scenery, the culture, the music scene are all sort of what’s our sound and how we are as individuals. I think a huge thing about how we write songs is we tend to write a ton of tunes and bring them to live shows before we even release them. I think playing our songs live to the local music scene has shaped how we ended up finishing off a song until we’re ready to release it. The cool thing about Bloom is a lot of songs from it have been in our live set for the past two years. A lot of people who are in our music scene recognize them arnd they’re excited to finally be able to listen on our actual platform.

How has the dynamic been writing without live shows?

BRAD: It has opened a door for us to explore areas we wouldn’t have necessarily thought to explore, like a softer song for example. We don’t really have slow soft songs, so we have explored and had a lot of fun with that being more thoughtful and melodic. At the same time, what better way to deal with everything going on than to escape into the route you get to build with the music you create. We wrote a song called “Brighter Days,” which is about the celebratory feeling of getting past what we’re in right now just preemptively written because we want to feel like it’s over. It’s been inspiring in that way and a form of escapism for us.

2020 was what it was, but you guys got 768 thousand streams on Spotify, how did that feel? What accomplishment were you the proudest of this past year?

BRAD: We also hit one million streams all time as a band in 2020, so that was super cool. Having 790 thousand plays in a year in something like 70 different counties, pretty crazy. Ben and I always talk to each other and think about when we were just in my parent’s garage in San Jose.

BEN: I was thinking about like a year and a half after we met we were like “we’re going to get matching tattoos when our first song hit 10,000 plays” – [they actually did] that was such a big deal to us. We’re eternally grateful for the fact that we have people that love our music so much cause we’re just out here writing songs and having a good time. We would still be writing songs even if there weren’t people listening.

What songs should readers look forward to most on the album?