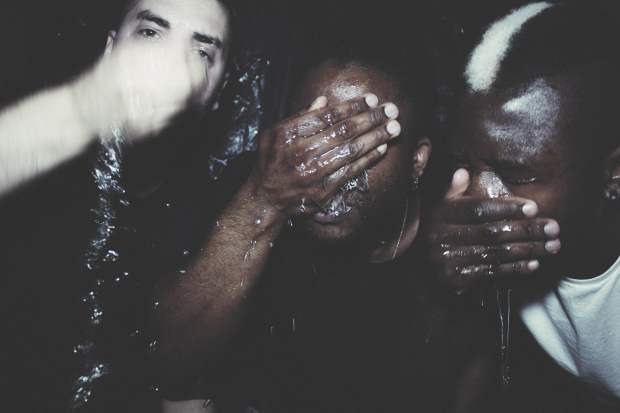 While we're in the basement when we ain't recording we indulge and learn life skills from Youtube videos. We offer these to you so that you, too may look and learn as we did.

The woman with the umbrella and the brass. Jesus! Ecstatic, life affirming – living thrown into stark relief. But what do the umbrellas mean? It's a good way to go, innit? I mean, if you gotta go… and we all do. But it's also a show, a gig. We try to have a similar streak of true human spirit running through our own shows… don't necessarily need someone to die to make it happen though.

Drummer boys picnic. Truly inspirational. Truly inspirational hooch. While this was going on, the smart folks at Studio 54 were dancing to Chic… and a year later they were burning disco records in a stadium in Chicago… who was having the better time? When we hit the States next year we're hoping to get invited… midnight in a field in the middle of rural nowhere with a bunch of strangers banging drums and off their fucking heads in the firelight and the dust.

Story of a state run popstar… the suit and the hands, praying to the English pound and the burning cross. Every aspiring pop person should be made to sit and watch this film with 'eye openers'. A prediction, almost a documentary. Blessed are the fingers of the popsinger.

When we were an Aspiring Psychedelic Boy Band our producer at the time made us watch this film and use it to inspire and understand. He's a sick fuck. In a way, it would be better to keep this away from the politicians and church leaders – they also might get inspired!

“All through yo body” Peter Popoff, America's next president? “Back off devil!” Young Fathers music has the power to cure. The lame can dance, the blind can see, the dim become brilliant and the ordinary, extra-ordinary. But only for the length of the show. When it's over they can take some of our patent holy water home in the form of a CD and try to relive the experience in their own homes. We believe in the grace and the goodness of Lee Scratch Perry. Rejoice in the name of Otis Redding. Ol' Dirty bastard… we say his name in hope and love. Now stand. And walk. And dance.

Fucking beautiful. We only just realised the other night he's saying the same thing over and over – enjoying it so much we didn't notice. In a perfect world this would be number one top of the hit parade super smash for months on end. Our theory is that this is one sexy motherfucker. He has populated small towns with his prodigy. That's why he has to sit down in the video – poor guy's knackered. There are different levels of cool and different versions on the different levels. He exists in his own space and we gravitate towards him. He's in a bubble of elevated South African hipsterity.