The honor behind Crispin Glover's darkness 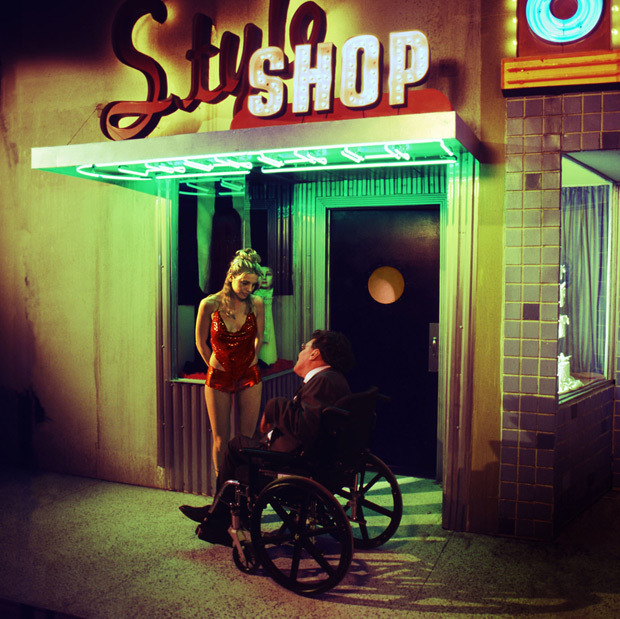 While I was watching Crispin Glover’s It’s Fine. Everything is Fine., my mind swung between: “Why do I always put myself through stuff like this?” and “I never want to see this movie again.” Afterwards, once Glover began leisurely answering questions (and pre-emptively answering unasked questions), the thoughts were now more positively scurrying between, “What a committed and honorable guy!” and “I’m getting so much more out of this than what I paid for!”

It’s no wonder Glover insists on being present in person when a movie like this, and its “It” trilogy predecessor, What Is it?, are being screened. When someone asked why he hadn’t gone the route of online distribution, he said he doesn’t want these uncomforatable films being ubiquitously watched over the internet without an understanding of the context that exists outside the film. Glover was more than eager to explain everything. Even as 11PM came around and enthusiastic fans began to slip out in small sprinkles, he intended to give us as full an account of his thoughts as he could. Business details like how he shares the screening revenue with theaters (including the deal with IFC, where we were now), and how the property tax in Czech Republic — where he’s bought property to build sets — is one of the lowest, were shared as if we were film students and he the generous professor. Frank opinion on the unsatisfactory quality of some bigger projects he’s worked on, and why he didn’t end up in the Back to the Future sequel, were shared with that same sense of genorisity. All that honesty created a sense of understanding (at least for me) that information was being shared for the benefit of those physically present there, and the experience was a private one that belonged to just us.

There’s another reason for keeping his films exclusive to these kinds of screenings. It’s inevitable, he thinks, that the piracy crisis that’s haunted the music industry will soon catch up with movies. He finds the prospect scary because the cost of making movies — at least the kind he wants to make, shot on film, utilizing sets — far surpasses the cost of making a record, even when it’s a record made lavishly; but with faster internet speed, pirating movies is bound to be just as easy as downloading an album. So he’s chosen to even skip DVD production, and, instead, tour with the films, as he’s done, exhaustingly, for the last six years. There was some applause when he mentioned that he’d already recouped the cost of making Everything Is Fine through such tours. The marked up ticket price includes quite a generous live reading performance before the screening: for us, he performed from eight books, sparkling with sweat by the end of it; and there’s additional revenue from book sales at the signing that take place after.

A large chunk of the expense for Everything Is Fine was due to the sets — haunting and gorgeous — designed by David Brothers. Glover’s insistence on building them is admirable, as they turn out to be integral to the film’s identity. The screenplay was written by Steven C. Stewart, who was born with severe cerebral palsy; a non-degenerative condition, Glover explained, that rarely deviates from the severeness with which one is born. Having had severe physical disability but normal level of intelligence all his life, Stewart was informed by a sense of humiliation, and this script meant more to him than most other things. Glover found it through friends who had worked on a documentary with Stewart, and he was determined to have it made with everything it deserved — especially the sets; he referred to the movie’s “corporateness”, an apparent quality of production as if a big studio had funded it.

Everything Is Fine was funded with earnings Glover made from his role in Charlie’s Angels. In fact, the decision to take that role was prompted by the urgency with which he had to make the film. In 1996 (if I remember correctly), Stewart, who would also play the lead role, suffered a lung collapse, and it was uncertain how much longer he’d live for. He died within a month of filming the project. When his lung collapsed one final time, he asked the filmmakers if any more footage needed to be shot. The answer — “no” — affected his decision to be taken off life support.

Stewart had two main intentions in his screenplay: 1) to tell a story, as someone with cerebral palsy, of his own fetishes (girls with long hair!) and sexual fantasies, and 2) to make a murderous villian out of his character, because he saw the norm of portraying handicapped characters in good light as a denial of their humanness, which includes a capacity for evil. When Glover warned him of what viewers might think of him after the movie, Stewart’s response was, with fist high, “Oh yeah!” — “He was definitely in on the joke”.

Considering how attached he was to the project, Stewart seems to have been open to the filmmakers’ suggestions, though the end result is pretty close to the original, according to Glover. The original was, however, in the vicinity of 120 pages, about 50 more pages than what Glover considers ideal for the kind of movies he wants to make. Most of the length, he said, came from explicit sexual encounters Stewart’s character would have with a series of girls. Glover condensed the selection of those encounters, picking what would best represent the overall progression, and made all of them, but one, far less explicit than what the script called for — he was concerned about getting actresses of a certain calibre who would be willing to play the pornographic scenes. “But I knew I could at least find one,” he said of the one scene where the sex is filmed as it was written: pretty pornographically!

The third installment of the trilogy is yet to be filmed. Glover had originally planned to save the sets from Everything Is Fine, but they ended up having to dismantle it immediately, which led to the realization that he needed to own property to film future projects.